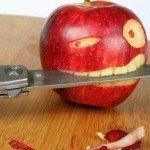 Love him or hate him, Charlton Heston and his gun fanaticism can take you a long way if you want to memorize foreign language vocabulary.

I like when you talk through your mnemonic devices. The Brazilian U-tube lesson with the Ajudar image and the Yewish Yoda being helped into the death start was neat to see you talk through different aspects until you reached your final mnemonic. Not so much the destination but listening to your journey in the mnemonic helped me think through some tough ones.

I am studying Tagalog and Bisaya which both use the word NGA and has the velor sound at the beginning of the word. NGA means so or indeed. It also is the beginning of NGALAN which means name. And likewise is found in teeth= NGIPIN, and now= NGAYON.

I was wondering you could talk out loud (or write out loud) through a mnemonic for these words since there is not word in English that starts with a NG. I am just hitting a brick wall in working around these words and would love to hear your train of thought to overcome this.

Thanks for your note and kind words!

The trick, at least from my perspective, is to simply relax and see what comes into the imagination for Memory Palace utilization. Immediately, when looking at your example, I saw Charlton Heston doing his National Rifle Association schtick.

The Power of “Misreading” For Creative Problem Solving

Of course, NRA and NG are not the same thing, but that’s enough for me because I can willfully “misread” NRA as National Gun Association. From then on, it’s just a matter of creating an alphabetical list of words that start with NG, popping them into a Memory Palace and having Charlton Heston with a gun involved in each and every piece of associative-imagery. Thus, NGALAN become Charlton Heston firing a gun at a giant name tag/shield on the chest of my friend Alan. For NGIPIN, Charlton Heston is shooting teeth from the gun at Pin, who is a medical dummy in a film I really like called Pin.

Another trick is to make sure that whatever you come up with is sufficiently interesting, concrete and “combinable” with other images.

So what do you do if you’re not like me in terms of being able to relax and have a flood of associations come up relatively instantly.

You have a number of options.

1) Wait. If things don’t come instantly, just wait awhile. You know that feeling when you have a word or a name on the tip of your tongue, but it refuses to emerge? The classic answer is just to focus on something else and more often than not, that name will suddenly pop into your head. The same thing goes here.

2) Actively look for concrete associations. A quick search for “famous people with the initials NG” brought up Newt Gingrich. I have a very solid image of this figure in mind, because even as a Canadian, he’s been prominent in the media for a great deal of my life, so I could use him.

3) Dig your wells before you’re thirsty. This means actively keeping a list of famous people: artists, actors, musicians, people who are famous for no other reason apart from the fact that they are famous.

4) Stretch. Just like a turn NG into the NRA and Charlton Heston because that’s the way my mind works and it won’t cause any stumbling, so can you practice stretching. Call it Magnetic Mental Yoga, if you like. NG could become someone you know named Angie, it could become an Angel, it could involve nuclear bombs falling on Los Angeles as in the film Miracle Mile (or the Terminator movies). It could even involve fracking.

And if for any reason you like Asian cinema and literature, then you’re really in for a treat because Ng is actually a name that many people have in those cultures.

Regardless, the more you simply maintain an awareness of how useful the culture around you can be, the more you can prepare your imagination to absorb these elements and draw from them at will.

It’s like dreaming while you’re awake, which when you think about it, is what you’re doing anyway. This is also why I created the How to Remember Your Dreams training book and video course, both of which are available in the Magnetic Memory Method Masterclass. Not only can you develop a pool of associations from the culture of entertainment, politics and general celebrity, but you can train your mind to recall your dreams at a much higher level, which promotes creative thinking, gives you material that you can use in exercises that will make you more visual in your imagination and generally makes life better.