How Using A Memory Palace for Chaucer Helps Language Learning 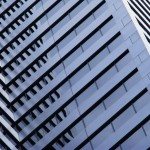 T.S. Eliot wrote that “April is the cruelest month,” and it looks like he may have been predicting a typical Berlin spring instead of making a subversive pun on Chaucer with respect to the war he saw in his time.

Thinking of Eliot reminds me of the importance of variety when training yourself to memorize vocabulary.

For example, we can really stretch our abilities and reach bilingualism faster by spending time with poetry. In fact, memorizing poetry in your mother tongue is great practice for memorizing phrases in your target language.

Now, it’s still cold enough for me to be uninterested in memorizing any lines from The Waste Land, but I have always wanted to memorize a bit of Chaucer, especially in Middle English. Have you ever tried to read it? It goes like this:

The droghte of march hath perced to the roote,

And bathed every veyne in swich licour

Of which vertu engendred is the flour;

Inspired hath in every holt and heeth

Tendre croppes, and the yonge sonne

Hath in the ram his halve cours yronne,

That slepen al the nyght with open ye

And specially from every shires ende

Of engelond to caunterbury they wende,

The hooly blisful martir for to seke,

That hem hath holpen whan that they were seeke.

It can be difficult to imagine how these lines might have been pronounced. For example, I once heard Seth Lerer read this passage and he pronounces it quite differently than my English professor did.

In any case, if you are struggling with memorizing the sounds of your target language, the exercise I would suggest this:

Spend some time memorizing a few of these lines from Chaucer as a means of practicing pronunciation memorization using words we’re basically familiar with, but are cast differently.

The Steps For Using A Memory Palace To Memorize Chaucer

First, pick a location. Turn it into a Memory Palace.

Make sure you create the needed number of Magnetic Stations for this exercise.

There are 18 lines, which means at least 18 stations.

Some people may need 2 stations per line, while others may be able to squeeze in more than one line per station.

Myself, I normally use one line per station when it comes to poetry, but always make more stations than is necessary just in case. This measure helps prevent “Memory Palace Scarcity,” the crippling condition in which you struggle to memorize because you feel like you’re running out of space.

(Yes, this is a real condition and it is important to avoid it. Here’s how to find more Memory Palaces on demand.)

A Memory Palace Example In Berlin

It occurs to me that I haven’t yet used the apartment I’m currently living in, so I can get started in my room/office.

It’s a Terminal Station, meaning that I won’t trap myself by starting strategically at my desk, or better, in a corner. 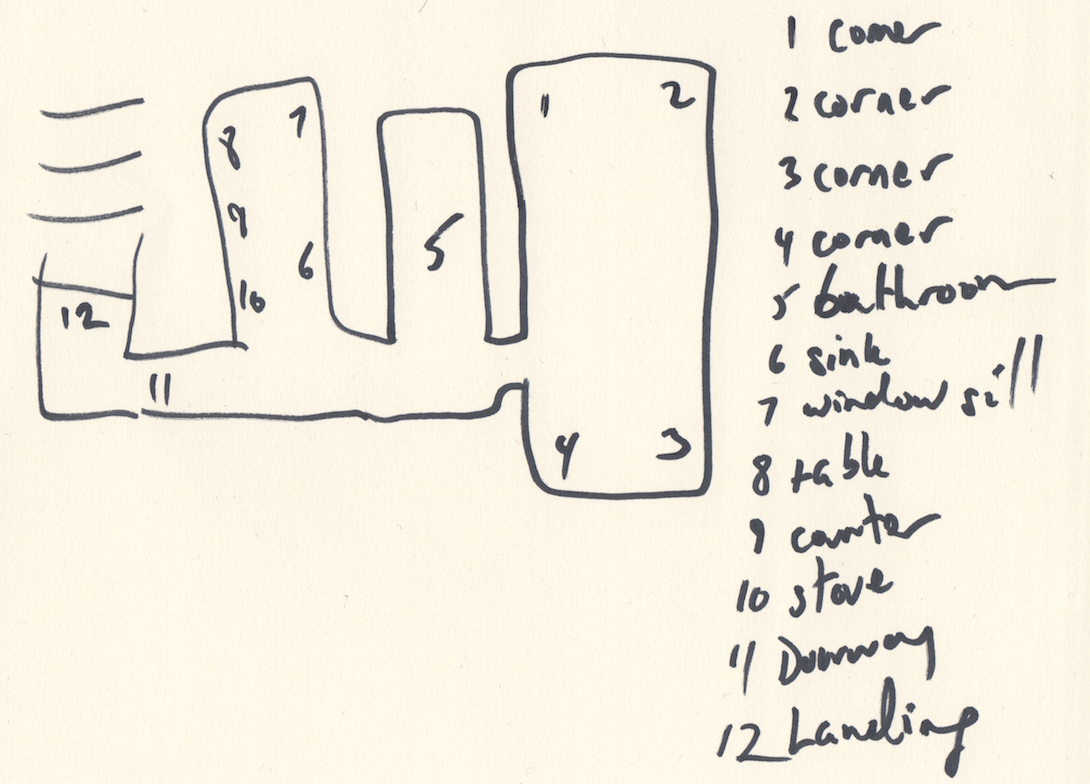 From there, I can move out through the apartment, into the courtyard and out on to the street if desired.

However, because I don’t want to cross my own path, the layout of this apartment limits my options, so I’ll be out on the street quicker than I would like after the Station 12 landing.

Nonetheless, my room itself is rather large and offers me a number of stations based on the objects in the room

These are not pictured in the drawing, which I made for a different memorization project – but here’s a photo of the same room with some mnemonic examples I created: 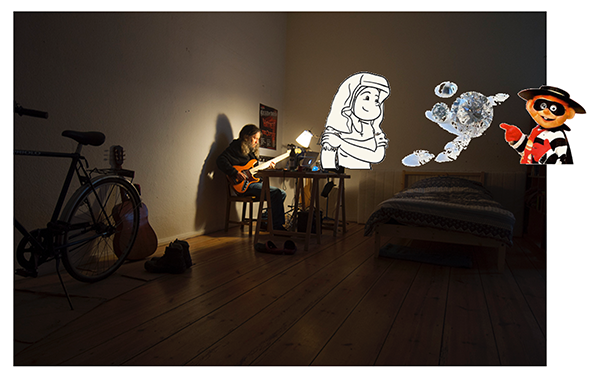 If you need more help with these steps, here are 5 Memory Palace Examples To Improve Your Memory Training Practice.

For the Chaucer goal, here are the Magnetic Stations I’ll use based on the method of loci:

1. Right side of desk

2. Left side of desk

Now let’s take a look at just the first line to see how this might work with respect to, not only the line of poetry itself, but its pronunciation.

James Wan is a film director I’m familiar with, so he’s going to represent the sound “Wahn.”

To remember the pronunciation of “Aprill,” Wan will be balancing pills on the April page of a calendar (April + pill = Aprill).

I find that words like “that” and “with his” don’t really need memorizing, so will skip them, but for “shoures soote”

I will see James Wan take his balancing act into a shower covered with soot.

It’s really just a matter of making these images large, bright and colorful and as absurd as possible before carrying on. Drawing on episodic memory will help. Follow up with these visualization exercises.

If you haven’t already started, give this little exercise a try. By focusing on material that is close to your mother tongue, but not quite English, it might make working with your target language easier.