A Rare Mnemonic Example: Godzilla Kicks The Statue Of Liberty In The Rump 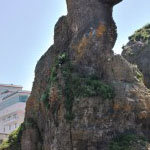 I received a question the other day about how to create the best and most memorable images in a Memory Palace:

I get the basic principles, but somehow my images don’t always stick. Somehow they’re not sharp enough.

I certainly can help.

The first thing to do is make sure that you really understand the principles of the Magnetic Memory Method and use them in their entirety.

There’s no snark in this instruction. It’s fundamental to real progress with this system that certain guidelines are implemented. The amount of success one has stands in direct proportion to the use of these principles.

Yes, of course the system is adaptable to your own learning style, and must in fact be adapted to each and every person (if not evolved), but it’s important that the potential of the journey to “bear the load” of the images is properly constructed in order for those images to flourish.

What is a properly constructed Memory Palace journey?

First off, it’s a journey that has been prepared and predetermined.

This is as simple as sitting down with your Magnetic Memory Worksheets and identifying some Memory Palaces based on real locations that you are intimately familiar with.

Then, you identify stations within each Memory Palace, reliable stopping-points that allow you to move between them without having to think about what comes next. That just wastes mental energy, energy you could be directing towards creating images and memorizing new vocabulary.

For anyone doubts their ability to move from station to station in a new Memory Palace, a bit of practice might be in order. In fact, for everyone, it is good practice to wander around a little before you even start building your Memory Palace and make everything as vivid as you possible can in your imagination.

I memorized the Russian alphabet the other day using a high school I haven’t visited in over 20 years. I needed 33 stations, so before getting started, I walked through the school in my mind one time before deciding upon a single station. I amplified everything I saw, making it as bright and colorful as I could and literally “willed” magnetism into the halls and classrooms of my old high school.

Then I got out my Worksheet and filled in the 33 stations with ease. In choosing them, I obeyed two of the key Magnetic Memory principles:

1) I started at a terminal location that allows me to avoid trapping myself and even add new stations if necessary (it won’t be in this case, but I think having the possibility is psychologically freeing and helps with the relaxation I practice during memorization – it also ensures that I obey the rule of not trapping myself).

2) I made sure that at no point do I cross my own path while proceeding from station to station.

These are all procedures that come before a single attempt at memorizing anything takes place.

These procedures give your mind the mental space and energy needed to create timeless images that will allow you to instantly recall any word you want.

In terms of creating the images themselves, here’s are four new principles to follow that I’ve been working on for a new Magnetic Memory product I’m about to release (and that anyone reading this can get for free simply by sending me a postcard with their name and email on it):

Make sure that the images you create a clear. I always talk about exaggerating them, making them colorful, vibrant and as large as possible, but they should also stand out clearly in your mind. I’ve decreased the amount of time I need to spend substantially by focusing on the clarity of my images, and also by focusing on how they stand in relation to the Memory Palace. It seems that the more clear my Memory Palaces and the more clear my associative imagery, the more the two Magnetically fuse together.

It takes only a second to focus on the details. If you are using a chicken to memorize something, what kind of chicken is it? A fat chicken, skinny chicken, red chicken, white chicken, chicken-in-boots with a cigarette hanging out of its beak – and if so, what kind of cigarette? Can the brand of the cigarette help trigger the target material you are memorizing? There is tremendous Magnetic wealth in the details.

A lot of people I talk to and discuss mnemonics with often try to make their associative imagery relevant. Granted, one should seize on coincidences. They happen all the time during my memorization sessions and work gangbusters for me. Normally, however, it is much better when the images are absurd and have seemingly nothing to do with the target material whatsoever. You could call this the principle of contrast, which is to say that the more the image sticks out like a sore thumb in your exquisitely magnetized Memory Palace, the easier it will come to mind when you call for it.

This point is almost the same, but differs in the fact that many people who describe their efforts to me put too much logic into the narrative elements of their image associations. They make pretty little vignettes that make sense. I’m sorry, dear Memorizers, but things that make sense are not always sensible. Certainly not when it comes to memorization. Here’s an example I heard from a coaching client once: “The Statue of Liberty is leaning down to pick up her torch when Godzilla kicks her in the rump.” Well, okay, that’s pretty memorable, I have to admit, but why is she picking up her torch? That’s logical. It sucks the memorability out of the image. Why not have her picking up Salvador Dali’s mustaches or a giant pig with Mount Rushmore tattooed on its flank? Having her pick up her torch is congruent with reality. Having her pick up a piano made of sandwiches lacks congruency, and is thereby far more memorable.

Well, then. Speaking of kicking statues in the rump, I’d better get mine moving. There’s still a lot of work to be done on this new product and a lot of help I want to offer those who need it.