Can I Use Video Games As Memory Palaces? 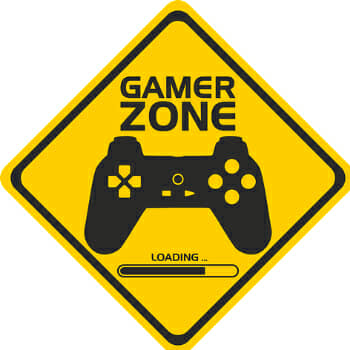 Many people ask me about using a video game as a Memory Palace. Here’s how such questions are often worded:

Hey, could locations in video games work for my Memory Palace? I’m talking about games such as Grand Theft Auto, Minecraft or the games favored by Pewdiepie? What about the Metaverse?

Before we get to the answer, a quick thought experiment in the form of a question:

Do you know the location of the Memory Palace Police Headquarters?

I’ll give you the address later, but think about it as we dive into the topic of using a video game as a Memory Palace.

I have only a passing familiarity with the games indicated by the question, but the quick and dirty answer is:

Yes. Of course. Why not?

A Memory Palace is a reference to space. This space is used either as a surface we paint mnemonic imagery onto, a surface we place it upon.

Or we might hover the associations above the loci. We can even stash them under or inside of locations inside of Memory Palaces, such as by using cupboards or even the pockets of our Magnetic Bridging Figures.

So long as you understand what the Memory Palace technique is and practice it, you can use video games. Or even movies. Heck, you can even make Memory Palaces from the individual pages of books to help you use elaborative encoding as you use both simple and advanced memory techniques.

The Truth About Using Memory Palaces Based On Video Games

In truth, it doesn’t matter what I think. The real answer is up to you.

When it comes to memory training, any “can I” or “could I” question almost always has the same answer:

Dive in and give it a try! If it doesn’t work…

Come back to the Magnetic Memory Method for foundational training.

Why Memory Palaces Are Always Experimental

What do I mean?

Every time I personally set out to use a Memory Palace, it’s an experiment. The Memory Palace is like a mental laboratory. If I’m memorizing anything using it, it’s a test of my skills. And I always learn something new.

Why Memory Palaces Are Always Virtual

This point gets into the philosophy of memory, and it may or may not be useful to you.

In brief, the world is represented to your mind by your brain. That means that it is a recreation of what is “out there,” not an accurate depiction of reality.

How is accessing one of these potential Memory Palace sources more “real” than the other?

The answer, in my not-so-humble, but always Magnetic opinion is that they are both equally virtual.

But what matters at the end of the day isn’t the intellectual debate.

It’s how well one option works compared to the other.

There are also issues of recursion to consider, as I did in this video about using a paracosm vs. the Metaverse.

I choose Memory Palaces that are based on “real” locations I’ve visited because I noticed one simple thing early on in my practice:

It’s faster and easier to set them up when they are based on real buildings. The amount of decisions that has to be made is drastically reduced.

But that might not be a concern for you.

If you are so familiar with that location in the video game that you can create a journey through it and don’t have to spend a millisecond thinking of what comes next, then I think that is great.

I’m being a bit dramatic with the “millisecond” thing, so don’t take that as law. The point is that speed is very important when learning, as is the principle called speed of implementation:

For this reason, I would suggest applying the same guidelines for preparation and predetermination I teach you to apply to “real” spaces to imagined spaces as well.

All the details about this are covered in my free course:

I think it’s worth thinking about the intention behind this memory improvement question.

In many cases, people want to create a video game Memory Palace Network simply because they never get out enough.

Is that a healthy reason?

I ask because so many issues with brain fog and depression that harm our memory come from social isolation and lack of exercise.

Even if you do have to stay inside, it’s still possible to find more Memory Palaces.

By the same token, my fellow memory expert Idriz Zogaj explains that some of the best memory athletes use movies to increase memory.

And we know that playing games can increase hand-eye coordination (not the same as ambidextrousness, but still cool to develop).

In any case, if you’re using a video game to avoid getting out into the world, you’re probably shooting yourself in the foot.

Creating a Memory Palace Network by visiting more of your city is a great memory exercise. And as I mentioned, it’s healthy too.

What About Reusing Memory Palaces?

This is a very personal thing, but I would predict that people who do not have enough Memory Palaces based on real locations are going to have issues reusing imaginary Memory Palaces.

Even if both actual and imagined locations are equally “virtual” in my view, it comes down to simplicity and speed of implementation.

But as I’ve talked about many times before, reusing Memory Palaces is rarely necessary. Nor is it always recommended:

That said, I have discovered some interesting alternative ways to reuse Memory Palaces that I’ve never seen discussed before. These are covered in the Magnetic Memory Method Masterclass.

As a case study, I reused the speech Memory Palace for my TEDx Talk three times in total.

Again, this is not necessarily recommended. But like I said, memory techniques are best when you treat everything like an experiment.

I think I said it best in this quick video, then we’ll follow up with the nitty-gritty:

If you’re going to use Memory Palaces based on games…

Platform Games Have Worked Best For Me

When I’ve used video games for my memory and learning goals, I prefer Donkey Kong as the Memory Palace.

This is because the entire game plays out on a single screen, not an endlessly changing landscape.

Platform games are also like how I imagine each room in a Memory Palace.

Each station is “fixed.” I move mentally from corner to corner, and for that reason, it’s better if the space doesn’t rotate around without your head having been in it.

See my post on Memory Palace Science for more knowledge on why this spatial element is so important when it come to thinking through the topic if you aren’t good at mentally navigating space.

You can also check out these five kinds of Memory Palace navigation:

Here’s another point that makes me like platform games a lot better:

The screens used for game play in platform games can be easily divided into quadrants without thinking too much about the layout. In this way, platform games are a lot like chess.

And chessboards seems to me a more likely solution for quick and easy to use Memory Palaces than a highly dynamic game with multiple environments that have to be memorized in order to be useful.

That leads to using Memorized Palaces instead of Memory Palaces. And that is ultimately a deviation from what the Magnetic Memory Method is all about.

If we take Donkey Kong as an example, the journey could start at the bottom left of the screen. That corner would be station number one.

Looking at the screen, you might see a number of platforms. Without Googling to see just how many platforms there are on level one, you can mentally decide that there are five and Donkey Kong stands at the very left of the top platform.

It’s completely up to you whether or not you “see” a figure moving in the Memory Palace or not. I don’t really have much of a mind’s eye (aphantasia), so that’s perhaps one reason I prefer to make mental calculations and keep things super-simple.

Just do the math on this example:

This particular configuration with a few simple operating principles based on one screen of Donkey Kong gives me 15 Memory Palace stations total!

That’s a ton of new information that can be memorized at the drop of a hat!

Of course, I don’t know the game involved in the original question. Perhaps you can set up Skyrim with a similar grid. Isolating a single screen when beginning with a game like this for a Memory Palace might help you more than trying to create an entire journey.

If you do, please let me know which game you used and a little bit of the journey you created. 🙂

On the matter of using “virtual spaces” for Memory Palace memorization, this topic is discussed in detail here:

How to Enhance Your Memory with Virtual Memory Palaces

The Final Word On The Video Game Memory Palace?

In sum, if you’re using the Memory Palace technique for learning, you want the technique that works best for you.

I don’t have the final word. You do.

And when it comes to knowing how to study fast, it’s always an individual journey.

Try both versions of the Memory Palace technique. Use your past often, including your childhood and other aspects of your autobiographical memory.

And if nothing else, you’ll have the benefit of some great brain exercise better than most of the brain games out there.

Where Are The Memory Palace Police?

Ultimately, there is no final word on this topic. There’s so much more to explore when it comes to the Memory Palace technique, and using memory spaces in general.

But the Headquarters of the Memory Palace Police?

It is nowhere. It doesn’t exist.

At least, not yet, except perhaps in one of my future novels. And that’s a very good thing.

Because at the end of the day, the Magnetic Memory Method is about helping you discover the methods you can use to create your own memory systems.

It’s about encouraging you to think for yourself.

And so for just about every “Can I”? question related to using memory techniques out there, the answer is very simple:

Yes, you can. Just treat it like an experiment.

And if your experiments don’t pan out, journal about them, like I discussed with Johannes Mallow and elsewhere in my teaching.

Don’t wait for the confidence to experiment to fall from the sky.

Build it by taking action, and use the speed of implementation rule to help urge you forward.

Are you ready to become the architect of your mind and experience better living through better memory?

Give me a hell-yeah in the comments if so!

4 Responses to " Can I Use Video Games As Memory Palaces? "