How to Use Anki to Learn Anything: A Complete Tutorial 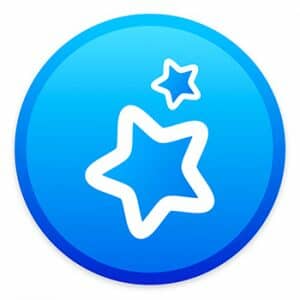 How would you like to learn a few thousand facts or words in a foreign language over the next couple of months?

The most popular SRS?

How does Anki work?

You have to work Anki.

Therein lies both its pros and its cons.

There are ways to optimize how you use the software so you really can populate your mind with incredible amounts of information.

So without further adieu, let’s dive in and look at a few case studies so you know how to use Anki effectively.

First and foremost, let’s look at the name of the software.

“Anki” is the Japanese word for “memorizing.”

According to developer Damien Elmes, the name was first used for the software in October, 2006.

As a learning tool, the software allows you to make the digital version of flashcards for repeated exposure to information.

How is using the software different from rote learning?

In a word: it has an algorithm that essentially mimics the Leitner box.

Herein lies two of the problems with the software:

How to Use Anki Effectively: A Complete Tutorial

Using Anki correctly requires that you are always honest in your assessment.

As polyglot and language learning expert Olly Richards points out, you need to personalize each and every card.

In memory science, we call this process elaborative encoding. Instead of just looking at information, we mentally transform it through a process of association. We’ll look at some specific examples in the case study section below.

For now, let’s look at some basic steps.

Step One: Decide On The Best Device For Your Needs

These days, a lot of people will default to downloading Anki to their mobile.

But is this really the best decision for you?

Not only that, but our “smart phones” are designed to interrupt us. We take calls on them, after all.

For serious learning, consider using a laptop or desktop. Not only can you more readily prevent interruptions on these larger devices. You can also have both hands free to take notes. This option is very important as you’ll see in a moment.

Anki allows you to share decks with people from around the world. Once downloaded, you can edit them to a certain extent.

Although this feature is admittedly cool, it robs you of the memory benefits of creating your own cards.

In Fluent Forever, Gabriel Wyner makes clear just how powerful making your own cards can be. Sure, it’s more time-consuming, but this Anki guide is about the truth. Convenience does not always equal your desired outcome.

Ultimately, the best strategy is to get the best of all words:

Ultimately, my preference is to create my own cards. For example, when studying medical terminology, it was easy to take photos of my hand drawn cards and import them into the software. 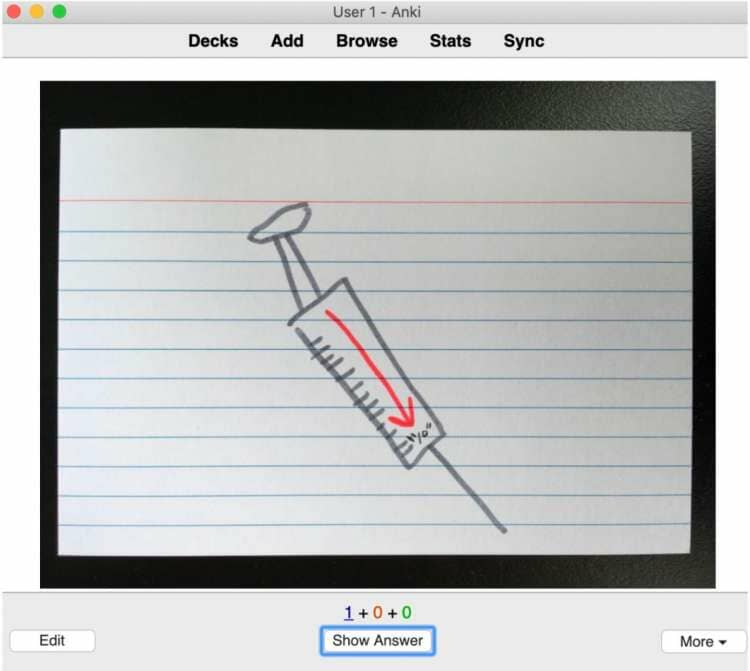 When it comes to how to make an Anki deck, the process is intuitive and couldn’t be simpler. You simply select “create deck” from the main screen.

There are different ways to make cards.

Taking a cue from Gabriel Wyner, I’ve almost stopped using text-based cards completely. Instead, I draw images that are visually “coded” as a puzzle my mind has to solve.

In the example with the needle above, the word was “hypotension.” The hypodermic helped with remembering the first part of the word. The “10” helped me recall “tension” and the red arrow pointing down gave me the meaning of low blood pressure.

Learning in this way follows the scientific principle of active learning mentioned above. Your brain makes neuroconnections much faster this way.

When reviewing, it’s really important not to just hammer your brain with them over and over again. Rote learning studies have shown that this can lead to reduced critical thinking abilities.

So what’s the alternative to rote learning?

Decoding in the manner I suggested above based on pictures and puzzles instead of words.

I follow a simple questioning process each time I see an image I’ve drawn:

As you saw, the needle with a “10” on it helped get back the parts of the word. The action of the arrow pointing down brought back the meaning.

If you have any doubts about the benefits of this form of recall, here’s one of the finest compilations of the best scientific studies on the matter.

But don’t stop at the science. Put the ideas into action yourself so you can find out just how well they work.

Step Five: Go Beyond the Call of Duty

As I’m sure you can already guess, you don’t even need the Anki software at all if you’re willing to carry physical cards around with you – which is precisely what I did when I was in university. (I finished my PhD in 2009 and never even heard of Anki until 2011.)

Eventually I learned to use a Memory Palace, which is a cool way to eschew with both physical and digital cards. This free course shows you how to use this Anki alternative:

The only catch with the Memory Palace technique vs. Anki is that the requirement for honesty in self-reporting goes way up.

But this point is important:

No matter how honest you are when using the software to set the recall algorithms, you can’t rely on studying alone.

You also need to supplement what you’re learning with ample doses of:

Combined, these multi-sensory and multi-media acts of deep engagement are the ultimate form of spaced-repetition. Make sure you schedule time for these activities.

Now that you have some solid steps to follow, let’s look at a few different ways you can use the software for rapid progress in language learning and specialized courses of study like medical school.

Note: Even if you don’t see your discipline reflected here, the basic approach will be the same based on the steps outlined above.

How to Use Anki for Language Learning

The first thing you need in this department is a list of words and/or phrases to learn. Then follow these steps:

Let’s look at an example of a mentally-enhanced Anki card for the French phrase “Où suis-je?” (Where am I?) 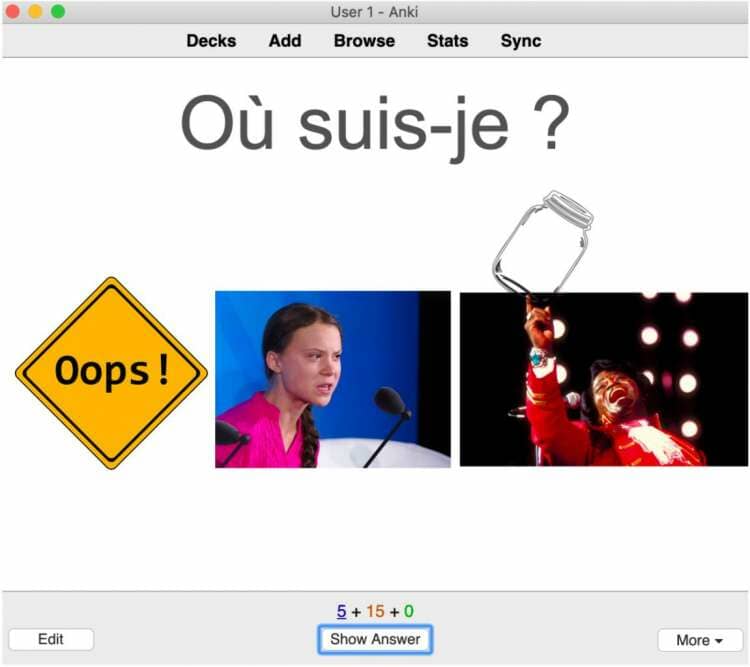 To hear a native speaker pronounce this phrase, I searched for it on Forvo.

Next, to avoid rote learning and maximize active recall, I used the story method.

In this case, the story involved hearing “Oops” shrieked by Greta Thunberg after seeing James Brown balancing a jar on his finger.

If these associations seem abstract to you, don’t worry. In the Magnetic Memory Method Masterclass I teach you the logic behind how to create such associations quickly and easily.

And don’t worry. You don’t have to be creative at all to do so.

Once you’ve elaborated your cards in this manner, it’s just a matter of following up with speaking, reading, writing and listening to more of the language.

How to Use Anki for Medical School

The process of using Anki as a medical student is not much different.

However, you may want to add on a few more memory techniques.

For example, since many numbers are involved, you’d do well to learn the pegword method. I’d also suggest you learn the Major System and then build a 00-99 PAO System.

Since you’ve already seen a few ways to memorize words and phrases, let’s look now at an example of equations you might need in medical school. 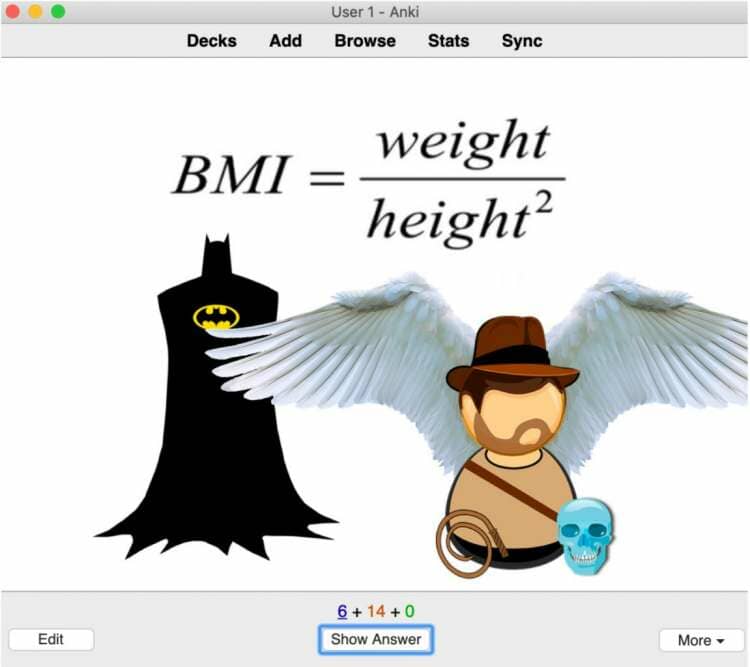 In this example, Batman helps you recall the BM part and Indiana Jones the I. You then have Batman measure Indiana’s weight and height because he’s suddenly sprouted the wings of a swan. In the pegword method, a swan is typically the image for two.

As with the other topics, it’s important to go beyond working with the software. You also need to process the material at multiple levels in order for it to deeply integrate in your mind.

Anki Is Only As Good As Your Discipline

As we’ve seen, Anki is a tool, not a magic bullet.

It’s essentially an automated version of the Leitner box. And if you’re not getting results from it, you might want to return to earlier, manual variations of the core process.

This is important because you cannot expect to get results with Anki if you use it inconsistently, allow your device to interrupt you while using it and fail to follow the principles of active recall.

Sure, plenty of studies show that it “works.” But as I hope you’ve seen, that way of describing the results is a misnomer.

You have to work the software.

And if you’re still not getting results, you might need to look into other areas of optimizing your life.

For example, many people have health issues that create brain fog. You might need to shake it off before you can even focus on using a software like Anki.

Or you might have self-confidence issues that diminish your capacity for discipline. For that, you might need to start with some mental strength exercises.

In all things, spaced repetition software is worth experimenting with, even if it’s never personally been my go-to memory technique. When I do spend time with it, or similar software programs for language learning, I always make sure to use the additional elaborative encoding steps you’ve discovered today.

Are you ready to start using this spaced repetition tool in an entirely new way?