How to Memorize Hiragana at Lightning Speed 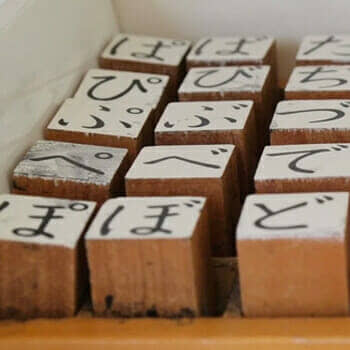 Learning hiragana seems like a monumental task at first glance.

But what if I told you that I learned it in just 1.5 hours.

Not only that, but I also learned katakana at the same time?

Including all the diacritical marks?

It’s true, and I will show you exactly how the fastest hiragana mnemonics work with visual examples.

Once you know the best way to learn hiragana, you’ll also know how to learn entire Japanese words and phrases.

Let’s get started with this powerful hiragana guide.

An Overview of Hiragana

Both hiragana and katakana are kana. They are used to phonetically transcribe Japanese. Hiragana is usually used for Japanese and the angular katakana is used to transcribe foreign words in Japanese.

In other words, 平仮名 is the kanji for “hiragana.” To spell hiragana using hiragana, you would write ひらがな.

な, for example, is the sound “nah” at the end of hiragana. が is the “ga” sound, but this particular rendition has a diacritical mark added to it. The “ added to か turns “ka” into “ga.”

In sum, hiragana are characters like the English alphabet. They help readers know how kanji symbols are supposed to sound.

Unlike English, hiragana may have diacritical marks added to alter their pronunciation. It’s similar to how German uses umlauts over some vowels to indicate a different way it should be pronounced.

Now that you know what hiragana are, let’s talk about memorizing them.

What I’m about to describe does take a bit of setup. I know you’re itching to memorize hiragana, but trust me:

If you’re willing to set up the memory system I’m about to describe, you’ll be able to use it to memorize entire words and phrases rapidly.

You don’t have to take my word for it, either. My students Kevin Richardson and Sunil Khatri have both donated tremendous amounts of their time to explain how they followed my teaching successfully.

Here are the steps:

One: Create a Memory Palace For Memorizing The Katakana

To rapidly absorb the hiragana, you’ll want to assign a mental space to help you.

A Memory Palace is the most effective tool for doing this.

It’s a mental reproduction of a location, ideally a home.

When I memorized the hiragana, I used one of my apartments in Berlin. I drew it out quickly and still have a photograph I took for my Magnetic Memory Method Masterclass students. 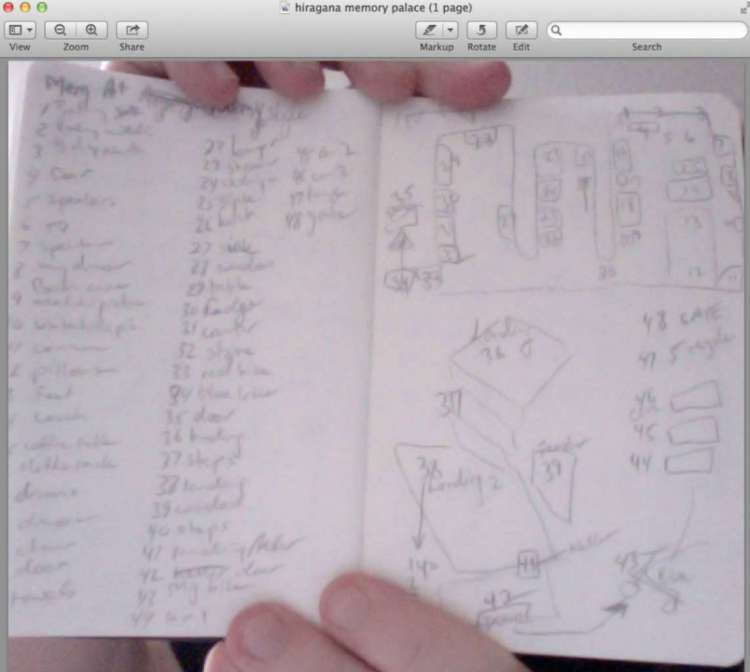 As you can see, I have 48 spots identified in the apartment, including the stairs, landing and the parking area.

There are only 46 hiragana characters, but sometimes I make my Memory Palaces just a bit bigger in case anything requires more than one station.

(If you add the characters that have diacritical marks, you actually have 71 characters, but I’ll show you how to simply add the diacritic rules to existing characters in a moment).

This step is fun.

To remember both the shape and the sound, I imagined Ezra Pound on station one of my Memory Palace.

I had him leaping up and shouting “ah” to try and avoid a fish that was leaping up at him.

Why Ezra Pound? Because following him around the entire Memory Palace involves the link and story method. It creates useful continuity between the stations that serves as an additional memory aid.

This is い. I have eels jumping out of Ezra Pound’s mouth on the second station of my Memory Palace to help me remember what this symbol sounds like.

Here’s a different view of how the hiragana looks inside a Memory Palace after you’ve memorized it. 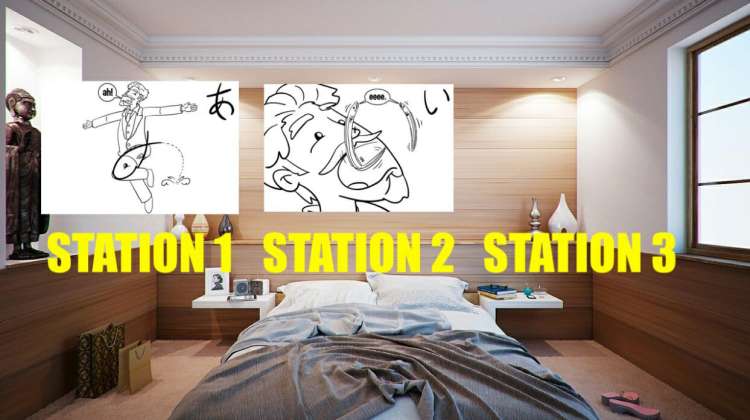 You literally just have to follow a simple journey. Set up one association per hiragana, per station.

Then, revisit that journey and fire off your associations one at a time. That’s the next step.

Everything we learn requires some form of repetition. But you can massively reduce the amount of review you need and avoid rote learning in this way:

These simple patterns will place the hiragana symbols and sounds into long term memory faster because of primacy effect and recency effect meeting serial positioning effect.

And when you use the active recall I’m teaching you through spatial association, you’re following the rules of personalization and variety. Both of these help you learn faster. And using memory techniques is the most effective way to make sure you’re getting ample doses of active recall.

You can group the hiragana into 10 kinds of stroke order. The Japan guy has an excellent tutorial on it. There’s also an animation for each hiragana character on the Wikimedia Commons site. Here’s another great resource from The Japanese Page.

To memorize these patterns, use your Memory Palace. 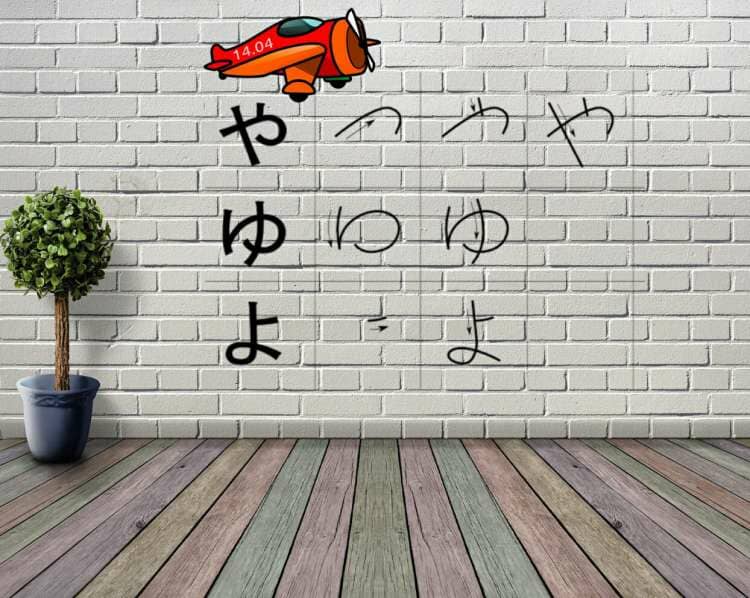 For example, when a hiragana character starts with a stroke to the right, you can memorize the Wright Brothers flying to the right. The name “Wright” will help you remember the direction.

You might need to play around to figure out exactly what you’ll use to remember the directions, but there are many options. Instead of left, right, up and down, for example, you could east the cardinal directions.

The diacritics are small marks that show when a sound like ‘k’ needs to be read as a ‘g’. As above, が is one such example. The か “ka” symbol reads as “ga” after the diacritical mark is added.

To remember this for each character as you learn hiragana, again, use your Memory Palace. 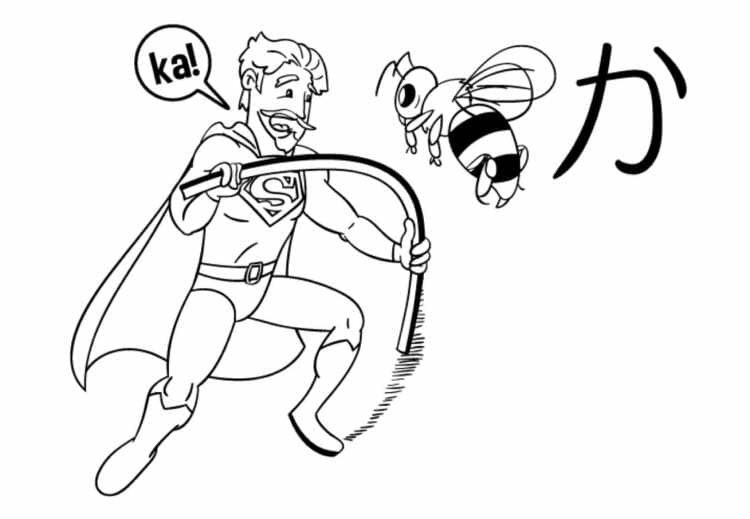 I suggest you just reuse the Memory Palace location and association you already created.

For example, I had Ezra Pound bending a stick while fending off a bee to help me memorize か.

I just imagined the bee splitting into three and then flying off into the galaxy to remember that が is “ga.”

This might seem like there’s a lot going on in the beginning. But soon you’ll be used to using these techniques.

Even before you feel ready, start writing out the hiragana that you can remember in a notebook. Follow the Memory Palace patterns I showed you above.

A great starter exercise is to learn how to write your first and last names in hiragana. Then write out the names of your family members and friends, favorite celebrities, etc.

You can also start transcribing any kanji that you’re familiar with. Look at Romaji as well and try and guess what hiragana you should use.

To speed up the memorization process and maintain your knowledge, read Japanese text that uses hiragana daily. Reading is essential because it serves as a form of natural spaced-repetition.

You can also use flashcards or Anki, but neither are strictly necessary if you read regularly after memorizing the hirgana.

How Long Does it Take to Learn Hiragana?

Studies have shown that Japanese native speakers know all 71 hiragana with a 95% rate of accuracy by age 5.

As an adult learner, it took 1.5 hours with nearly the same accuracy. (A year later, I still remembered half of them.) This is 50% faster than Timothy Stout suggests most adults can learn the hiragana using his suggestions in Japanese Hiragana & Katakana for Beginners.

But I already knew these memory techniques. I also memorized them in the first place for demonstration purposes.

If you’re new to memory techniques, my experience is that the average person is looking at about 2-5 hours.

That’s including learning these techniques themselves and setting up your first Memory Palace.

The important thing is to not overthink it.

Learning a language doesn’t need to take long at all, but people often focus on the wrong things. Focus on the right things, such as developing your memory and following a solid schedule, and you’ll dramatically reduce the time it takes.

As I just mentioned, reading and writing daily as you use the memory techniques is the most important thing. Be consistent so that your brain can form the strongest possible connections to the hiragana.

And like my students, continue studying and practicing the techniques themselves. That will rapidly take you from memorizing just the hiragana to rapidly absorbing entire Japanese words and phrases.

I would suggest thinking more broadly in terms of language learning goals and learning Japanese more broadly. There are some tremendous milestones you can achieve within a year, for example.

Now that you have a powerful strategy for learning all of the hiragana characters, simply create a new Memory Palace and follow the same steps to learn the katakana.

Later, you can model this process for placing kanji in your mind as well.

The most important thing is to stick with it.

In my own experience and in what I’ve seen after helping thousands of students, it’s all too easy to start learning something and then stop.

That is the key.

And one thing that can help tremendously is the Memory Palace technique. Grab this free course so you can feel endlessly motivated to keep taking action with your Japanese learning goals:

It will ensure that you know how to memorize all the Japanese you want.

Now that you know how to learn hiragana and katakana, the next step is up to you.

Take action and get results.