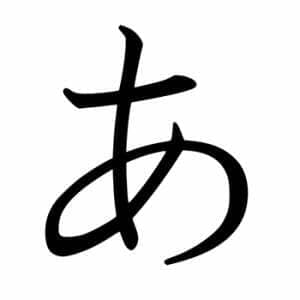 Imagine what learning both hiragana and katakana in 1.5 hours would do for you. Would you race to use Japanese mnemonics like that?

I know they work because I used them myself.

And the best part for you is that I’ll help you move past some common misconceptions about this stage of learning Japanese.

So if you’re ready to learn these two syllabaries in a way that is fun, easy and will help you learn other aspects of Japanese as you go, let’s dive in!

I can boil the problems in just about every other guide to learning these Japanese syllabaries to one word:

The mnemonics they suggest simply are not specific enough to help as many people as they could.

This is one of two key problems in the Heisig mnemonics for Japanese. (We’ll talk about the second problem later.)

And this is because true mnemonic images must always be concrete and specific. If you want to learn them faster and more permanently, that is.

Once you see the difference between vague mnemonic associations and “Magnetic” ones, you won’t be able to unsee them.

That’s because they explode in highly memorable ways. And assigning them is simple and fun to do. You’ll see what I mean in these examples.

But first, let me give you an example of what not to do if you want to remember all of these characters fast.

Example of A Poor Mnemonic For Hiragana – Do Not Copy!

When you’re memorizing a hiragana character like ぬ (nu), you’ve probably seen people suggest that you should think about a noodle. 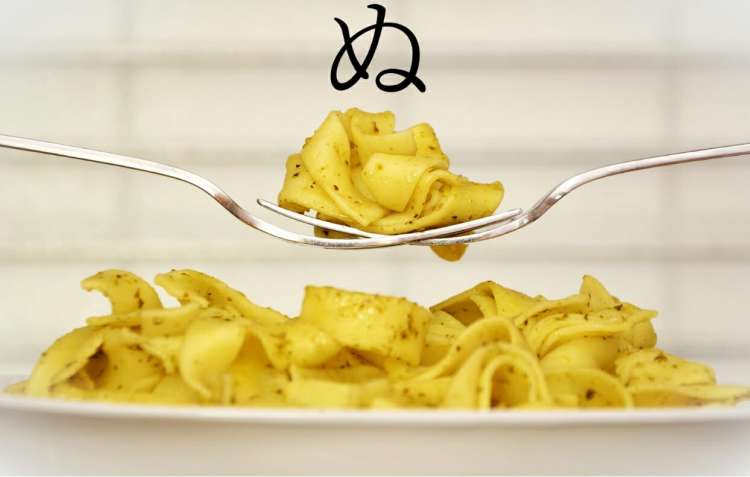 This Japanese mnemonic is okay. But it’s far from as good as it could be.

Although this is not terrible, just ask yourself…

What noodle have you ever seen that takes on this shape?

Chances are you haven’t seen any noodle ever curl itself in that way.

But here’s a better example:

One: ぬ (Nu) at High Noon with Isaac Newton

Using noodles is okay, but what will make the Japanese learning process so much faster is a more specific image.

For example, instead of the vague and generic idea of a noodle, why not use Isaac Newton.

He’s super famous, after all. And it takes just a second to modify him so he looks a bit like this hiragana. 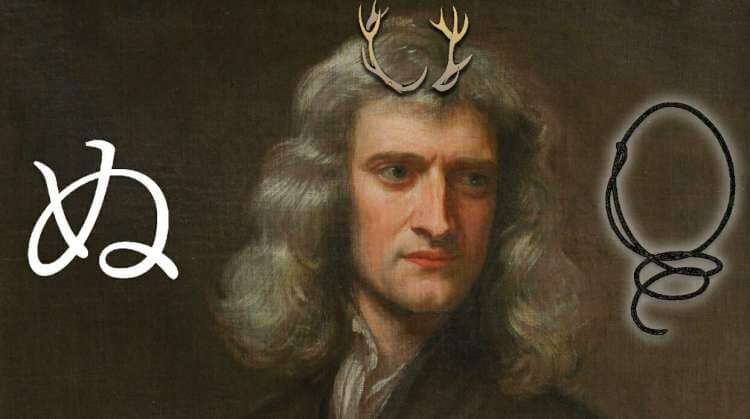 This mnemonic for the hiragana is superior because it is specific, dynamic and easy to imagine in action. Newton is a highly specific image that gives the “nu” sound and you can easily image the rest of the shape by giving him horns and a lasso to engage with.

In this simple example, Isaac Newton has been given antlers. These antlers resemble the left side of the hiragana.

But there’s more to the story method I’m suggesting here.

As Newton is trotting around in a Memory Palace with his antlers, he’s also hunting for deer with a lasso. That’s pictured on the right of the illustration.

I’m also thinking of the movie High Noon, with its gunslinger aesthetic. It’s a nice touch because it takes place in a world where lassos are used regularly and “noon” sounds like “nu.”

In this way, the hiragana mnemonic is “splitting” the hiragana into manageable parts while maintaining it with a person, action or object that is specifically tied to the sound “nu.”

In case this example of the two parts of the hiragana aren’t clear, here are some errors to show you what I mean by splitting them up: 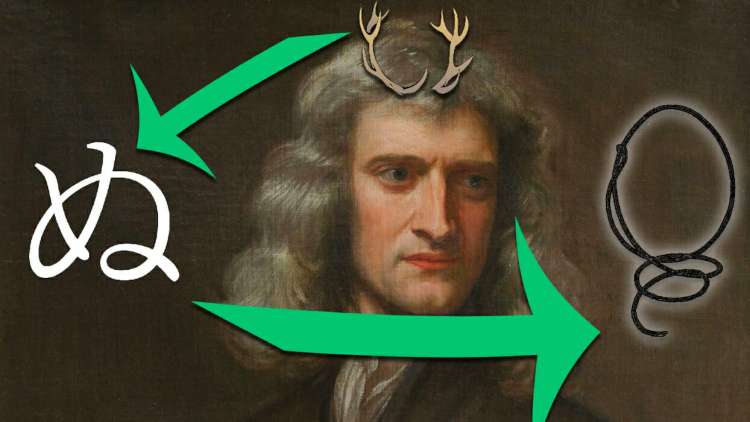 Cool, right? And much more memorable too.

Now that you’ve understood the basic concept, let’s look at some other examples.

It will work the same for both hiragana and katakana. And the best part?

You can use this same approach for memorizing the Kanji too, just like my students Sunil Khatri and Kevin Richardson have done.

But when I was memorizing the hiragana for a memory demonstration, I used what we call a “Bridging Figure” in the Magnetic Memory Method Masterclass.

The reason I chose Ezra Pound for my bridging figure simply has to do with his interest in Japanese Noh plays. You could use anyone.

The trick is to tie that figure to each hiragana in such a way that you remember what the character looks and sounds like.

In the case of あ (ah), I imagined Pound with arms out as if he were on a cross as a fish leapt across his legs.

For the katakana ア (ah), it’s a simple matter of putting the letter P on Pound’s chest.

Three: い (i) Is A Cure For Wellness and イIn Italy

Have you ever seen A Cure for Wellness?

There are a lot of eels in it. 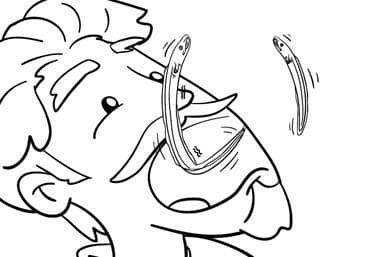 And I had this movie in mind when I filled Ezra Pound’s mouth with eels. This image looks close enough to the hiragana character if you ask me.

Then, to learn it as fast as possible, place it in the context of a full word.

You’ll find Italy rendered several different ways in hiragana. This is one of them: いたりあ (sounded something like ee ta ee ah).

Then you just repeat the process with イ.

This katakana reminds me of a person, kind of like the Chinese character 人 (person).

To memorize イ, I simply saw Ezra Pound walking bent over to resemble this basic shape in Italy. And that’s very convenient, because he lived in Italy for a long time. 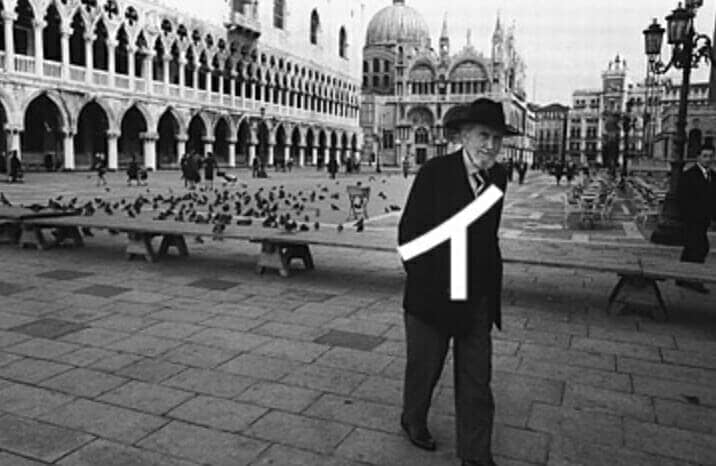 This is all fine and dandy… but how am I going to remember how to write these hiragana and katakana?

Don’t worry. I’ve got you covered. Here’s a tutorial that covers learning the hiragana stroke order. The exact same principle applies to the katakana.

Heisig gives the idea that you should imagine a “foul substance oozing from the ceiling” to help remember the “oooo” sound for this hiragana and katakana.

That’s why I imagined Ezra Pound in his old age leaning over his cane and harumphing “uuuuuh in his old age.” Pound’s hat helps remember the mark over the backward ‘c’ that his curved back represents. 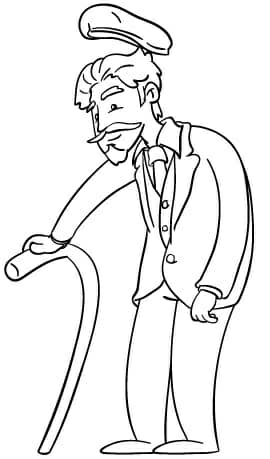 Now, you might be thinking… hang on. Didn’t you use Ezra Pound bent over to remember the イkatakana?

Good thinking! You’re anticipating an issue those of us who use advanced mnemonic devices call “border blur.”

But because we’re placing all of our associations on different loci in a Memory Palace for the hiragana and katakana, this is unlikely to present any issues.

Five: Visual Example of Hiragana and Katakana in a Memory Palace

As you can see in the illustration below, each association is placed on a unique part of the wall in a Memory Palace.

And this is the second major problem in Heisig.

He gives you tons of mnemonic examples… but no ideas regarding where to store them.

I spotted this issue instantly, as did my friends at Mandarin Blueprint.

And this is ultimately the secret to how I managed to memorize all of the hiragana and katakana in 1.5 hours.

All you need to do is select a building or familiar location and create a mental journey with enough space for all of the hiragana and katakana.

I know that selecting the best possible location can be a challenge. That’s why I created this FREE Memory Improvement Kit:

Grab it, complete it and soon you’ll have a wonderful mental tool that will help you rapidly memorize all of the hiragana and katakana. It works great for the kanji too.

Six: Mnemonics for the Diacritical Marks

The last topic to discuss involves memorizing the diacritical marks. These marks are called dakuten and handakuten.

For example, they help you read and understand when the か ka sound needs to be changed to either:

The trick here is that you need to add some kind of image to each hiragana. 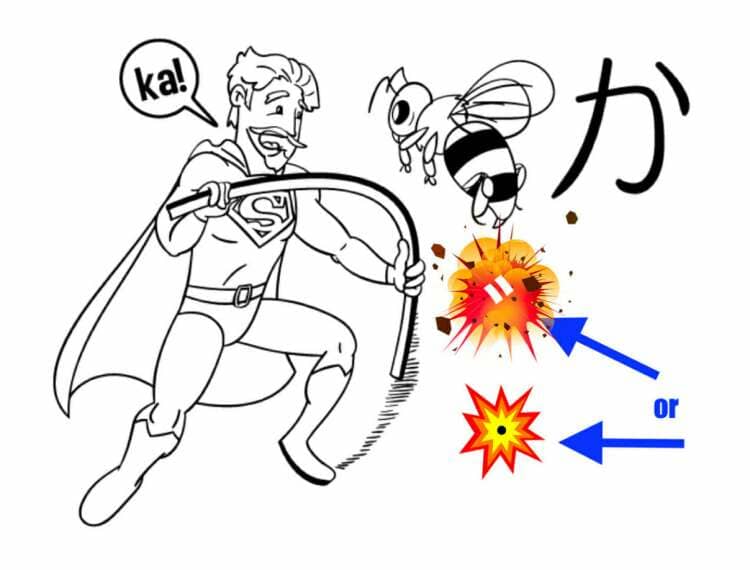 It’s fast and fun to add simple associations to help you remember the critical marks for both the hiragana and katakana.

In the example above, you can see the bee used to help in remembering か dropping either ゛or ゜diacritical symbols as if they were bombs.

Hiragana and Katakana Mnemonics Are Easy And Fun!

There you have it.

A precise set of examples to get you started learning Japanese quickly.

Sure, there’s a bit of upfront effort when it comes to using mnemonics.

But it’s worth it because it will rapidly advance your ability to learn the language faster than others.

And that means you’ll be able to enjoy other aspects of language learning without hassle or headache.

Are you ready to crush your goals with learning Japanese?

Enjoy this journey and just shout out if you have any questions along the way!