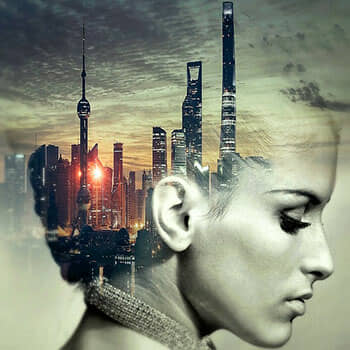 What comes to mind when you think about visualization exercises?

Does the simple phrase conjure up images of some woo-woo, fluffy mind game offered by a two-bit guru?

Or are you ready for the real deal from a guy who struggled to see pictures in his mind and almost failed, but…

… after hundreds of hours of struggle, finally found a way?

And what if I told you that I’ve discovered something profound about visualization?

Why Visualization Is Not Just About “Seeing Pictures” In Your Mind

I’ve discovered a simple process that suggests everything you thought you knew about “seeing pictures in your mind” is wrong?

Especially when it comes to memory techniques, the Memory Palace and everything related to mnemonics.

There are at least 8 Magnetic Modes:

And “seeing” is just one of them!

Now that you know there are so many different ways to visualize, would you give a few alternative visualization techniques a try?

If you said “yes,” or are at least nodding your head in the affirmative, that’s wonderful. Read on.

Did you know that visualization is so much more than meditation, and can actually serve you in your everyday life in a practical way?

Again, it’s more than seeing pictures in your mind.

But don’t get me wrong! 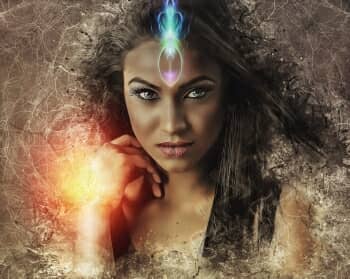 The ability to conjure up mental pictures is a great skill. Some people with aphantasia can’t do it at all.

But let’s not disregard our other senses.

Visualization techniques are most powerful when embedded in a multi-sensory experience.

Here are five visualization techniques that show you exactly how:

5 Beginner Visualization Techniques Anyone Can Master

Take a moment and close your eyes. Imagine that when you open them a candle has appeared in front of you. 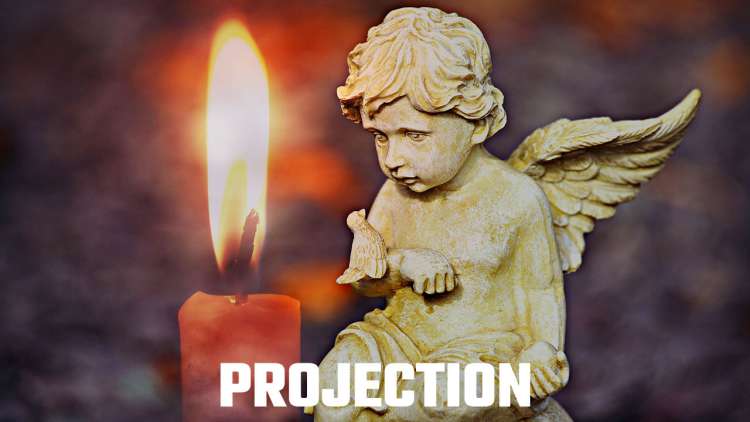 You can also try gazing into a lit candle then closing your eyes.

What do you see?

If you’re anything like me, you’ll experience an after burn effect.

You can no longer “see” the candle, but can still see its effects.

Using this after burn as a kind of canvas, mentally trace over the shape in front of you.

Gradually you will be able to visualize, in great detail, a candle and flame of your own making.

We can take this simple visualization technique one step further and incorporate our other senses once we have mastered the “visual” aspect. 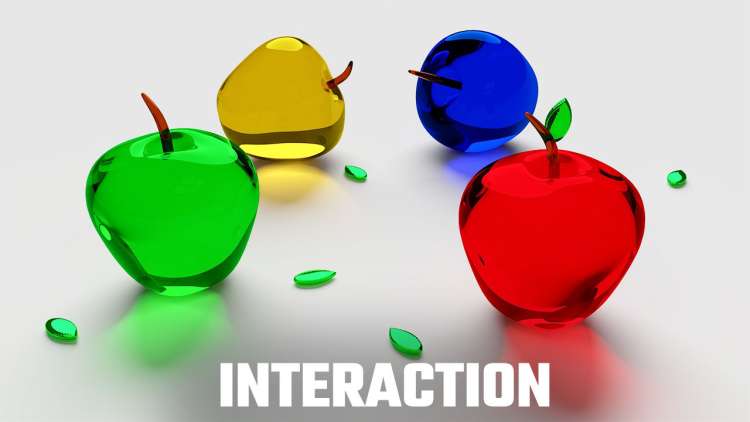 Feel its smooth peel, observe its perfectly ripe sheen, and then imagine yourself taking a bite.

How does it taste?

Imagine its crispness and taste its sweetness.

Follow the apple through your body as your entire digestive system interacts with it.

Don’t take this visualization technique too seriously or get too granular. Just play with the idea of being able to follow one bite of an apple through your system.

And ask yourself periodically as you go through the process:

How real is that apple to you?

Once you feel like you can move beyond seeing and feeling a simple, everyday object, try to visualize that object in relation to space in the room.

Imagine the corner of a table. 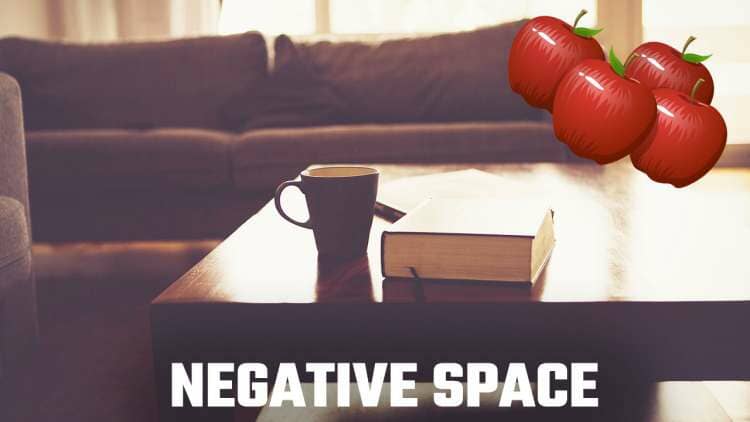 Where is it in the room? What is the negative space surrounding it?

Think of this visualization technique almost as an optical illusion.

We are all familiar with Rubin’s vase, though we may not know it by name. 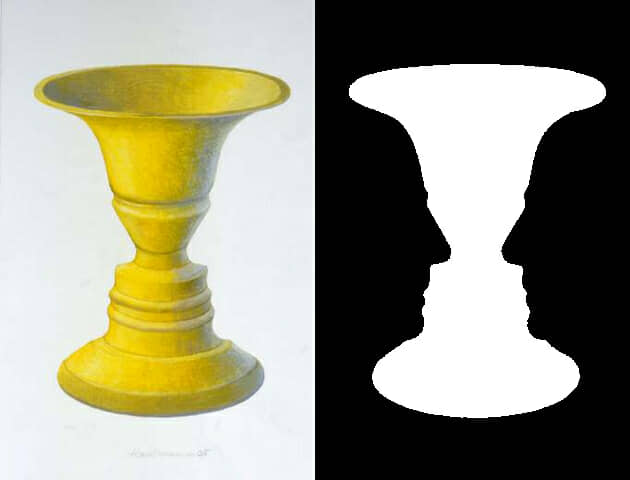 This is the optical illusion where one can see either two faces or a singular vase from an image.

The key is being able to toggle between the two.

To be aware of the negative space as well as the image.

This visualization technique is helpful when using mnemonics, a Memory Palace and other memory techniques because we need to “suppress” mental imagery at the same time we manipulate it. 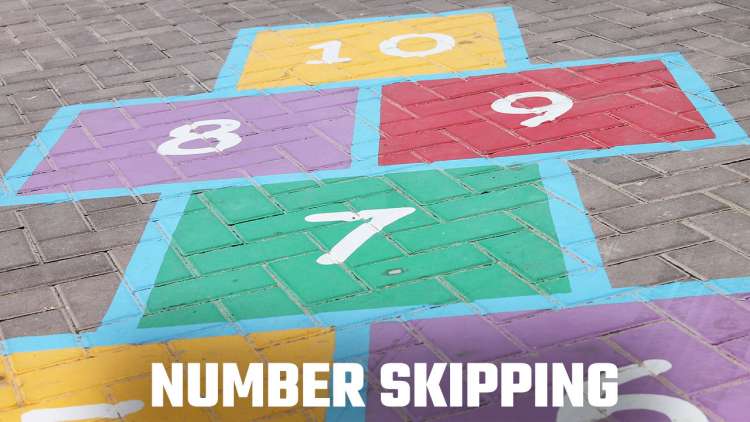 How abstract are numbers?

They are representations of concepts, right?

Take the number three, for example.

Three only “exists” when we conceptualize a group, or a set of objects, and call it three due to concept of three things we call “one” placed together.

How is three represented exactly? 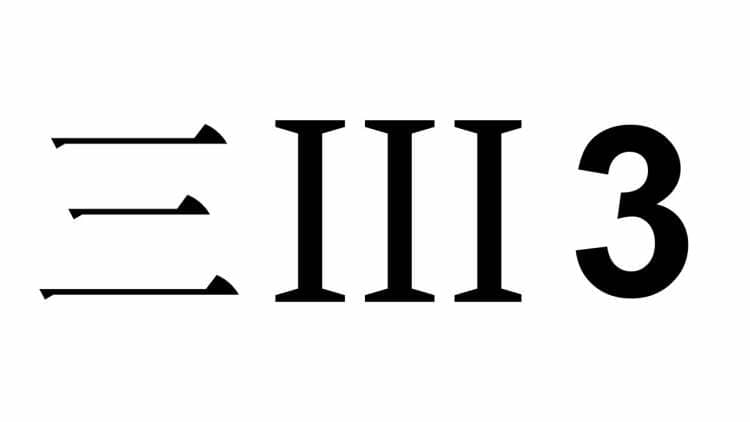 Three is represented based on a mark society agrees it will call “3.” You can see the 3 your culture uses, or multiples versions used by multiple cultures.

Start with a small goal…

…but the goal is not to reach the highest number!

It’s to stay connected and concentrated in your mind.

If you find this becomes so easy that your mind is wandering, you can build up to higher and higher numbers, eventually going forwards and backwards.

And that’s when the real challenge begins: 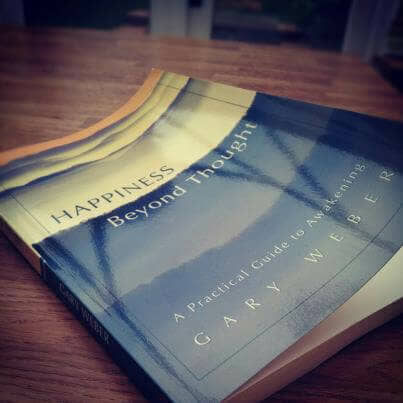 I first encountered the idea of skipping numbers in Gary Weber’s Happiness Beyond Thought. This is such a simple idea, but yet it’s such a challenge.

Don’t believe me? Give it a try.

Visualize the number one.

Now try to suppress the urge to visualize the number two.

Next, is three, correct?

Skip, or visualize a blank space in place of the number four.

Once you reach the highest number you can without losing concentration (say, for example, 10), then go in reverse. Visualize 9, skipping 8, 7, and skip 6, and continue on.

You may be asking “How is this useful? Isn’t this a bit counterintuitive? Am I not supposed to be visualizing? Why are you suddenly telling me to suppress visualization?”

I get you. I do. But hear me out and keep reading…

Remember, for memory training one of the keys is Recall Rehearsal.

You will find ways to use memory palaces in different orders, and actually need to, and want to, for memory benefits, get the von Restorff Effect working.

You can shut down thoughts so that they do not interfere with other thoughts. This visualization technique will undoubtedly aid you in further memory training.

In other words, the ability to not visualize helps you visualize because you can shut out competing images.

How well do you know your geography?

Don’t worry about it. This is an exercise based on what you know.

Next, slow it down. Make it completely still.

Travel all the way down until you touch the blue.

What is that blue?

The choice is yours, but let’s imagine for this visualization technique that it’s water.

Next, pick the color of your house.

Imagine your hand building up your home on the water. (You might want to spread some imaginary dirt underneath first.)

As you build your home through visualization, pay attention to all the multi-sensory details. I’m talking about the feeling of the stair rails in your hands, the smells in the kitchen and the temperature on a cool morning.

Next, lay out your street. Try to add as many of the houses and buildings as you can, holding each one in mind as you lay it out on the blue globe.

When you’re ready, zoom out. Allow the buildings you’ve built to get smaller and smaller until they are just a speck.

Any time you like, revisit the neighborhood you are building on the globe. I suggest you keep returning to it until you’ve mentally constructed as much of your city as you’re familiar with now.

And for the future, every time you’re out, pay close attention to how things look in the world. Try to remember as much as you can. Then the next time you practice this visualization, add more details to the imaginary version.

Next time you’re laying in bed, imagine a giant clock on the wall directly in front of you.

Give it a color, name what it is made from and hear the sounds of it ticking away.

Really go through it’s dimensions: It’s height, width, the diameter of the clock face. Think deeply into it, imagining all the gears and their intricacies as they wind through time.

Then, give the clock face numbers. Make the even numbers Arabic numerals and the odd numbers Roman numerals. Or, if you know a language like Chinese, use its hanzi for the numbers, mixing it up with other kinds of numerals.

You can also rotate between Arabic and Roman numerals, synchronizing the change as the imaginary tick-tock takes place. This is great training for your visual, auditory and spatial sense. 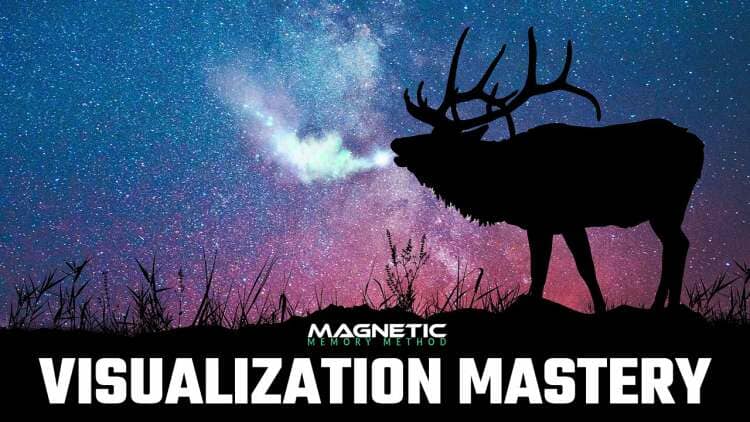 The New Visualization Mastery Course in The MMM Masterclass!

This result happens because the Magnetic Imagery they use in their associations are far stronger than ever before.

Do you want that?

Do you want to “own” any information every time you place it in your brain?

Cool. I can help.

It’s not that easy if you’re only using visualization techniques to “see” pictures in your mind.

The solution begins when people take things to the next level and use a multi-sensory visualization approach.

And in this new course, Visualization Mastery…

I didn’t JUST come up with these exercises out of nowhere.

No, I developed these visualization techniques with the help of dozens of memory athletes. I’m talking about memory experts like John Graham, thousands of MMM students and hundreds of hours of my own practice.

In this course, Visualization Mastery, you get the insights, skills, and ability to develop the strongest mental imagery for your Memory Palace efforts ever. They’re even more powerful than these neurobics.

And the calm confidence that tells your brain that you’re serious about memorizing information quickly, efficiently and permanently.

If you’re already in the MMM Masterclass, please login now to take the course.

Or, if you’d like access this special training course and much, much more, you can read all about the Magnetic Memory Method Masterclass here.

Use these visualization techniques regularly and consistently. Don’t expect results from just one session.

Also, mix and match these exercises. For example, try number skipping with candles or apples, both forward and in reverse.

Or, add a range of simpler and more advanced exercises. Here’s 5 more easy and fun visualization exercises I shot for you in 2022:

Really, the sky’s the limit here. The more you play with this visualization technique, the more benefits you will receive and the more ideas for more brain exercises will emerge.

Above all, keep challenging yourself and your memory for growth. It’s when we stop getting brain exercise that we go downhill. And if you want more practice, these positive visualization exercises and guided visualization tips will help you keep moving forward.