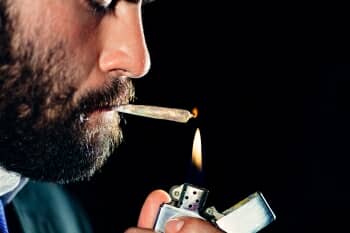 You know all about the dangers of smoking, right? Bronchitis, emphysema, vascular disease … Heck, the Demon Nicotine has even been linked to cancer.

But did you know that smoking also poses risks to your intelligence and memory? Some experts disagree, but common sense in combination with evidence tells us that …

Never fear. If this post doesn’t spook smokers out of lighting up ever again (it probably won’t), it’ll at least educate them. Plus, I’ll give you some ideas for how to quit with minimum suffering in record time. If you’re not a smoker yourself, you can at least pass the tactics on.

But if you’re one of those who prefer cocktails of carbon monoxide, nitrogen dioxide and hydrogen cyanide, abandon this post right away because it’s basically a rant from a guy who cares for both you as a person AND for your mental abilities. So buckle up if you’re going to stick around, because here comes some tough love from your friendly neighborhood Warrior of the Mind.

A Brief History Of The World’s Stupidest And Stinkiest Habit

There may be earlier accounts, but history tells us that Columbus witnessed Native Americans huffing and puffing on rolled dried leaves starting in 1492. They “drank the smoke” as he put it.

Later, ships brought some of those Natives with them to Europe, leading to tobacco seeds being left at each and every port of call. The Dutch brought tobacco home from the Hottentots, the Portuguese introduced it to the Polynesians and people soon planted nicotine anywhere and everywhere it would grow.

We often think of royalty from the 1600s as slovenly pigs stuffing their faces with mutton and mead, but not King James. When he wasn’t busy developing the Bible, he was writing hate mail to smokers. Check out this rant in which he says smoking is …

“… A custom loathsome to the eye, hateful to the nose, harmful to the brain, dangerous to the lungs, and the black stinking fume thereof nearest resembling the horrible stygian of the pit that is bottomless.”

King James wrote those words in 1604, but his rage was nothing compared to the Russian czar who banned smoking and said that “offenders will be sentenced to slitting of nostrils.”

Nonetheless, demand exceeded supply all over Europe, and tobacco prices soared. As a result, some people got mighty wealthy.

By the 17th Century, smokers had become aware of nicotine’s addictive powers. But it was already too late, and, much worse, tobacco had become central to the development of an emerging economic and political powerhouse.

For example, the tobacco industry bolstered the success of the Virginia Settlement. Farming the plant became the backbone of slavery and the southern plantation practices overall. The weed stood behind the Louisiana Purchase and is still considered America’s oldest industry (not to be mistaken with prostitution, which belongs to the entire world).

By the 1930s, smoking had entered the world of advertising. Printed images of sexy women and dapper men enticed people around the world, not to mention Hollywood movies, which were entering the era of sound. Now you could even hear the sounds of beloved celebrities puffing their way into early graves.

If You Think Trump Is An Idiot, Get A Load Of This

Some people admire Theodore Roosevelt and perhaps for good reason. But he’s the same dude who classified tobacco as an essential crop and had the stuff shipped overseas to America’s servicemen. Thanks to him, they could get their limbs blown off and memory-destroying pulmonary diseases too.

Not only that, but in 1945 alone over 267 BILLION cigarettes were sold domestically in the US. The military draft legislation was changed so that enough people could stay home to work on the tobacco farms to supply the domestic and overseas markets.

Science Fails To Come To The Rescue

Although people had long been aware of tobacco’s addictive properties, medical research didn’t pick up the issue in earnest until the 1940s. But it wouldn’t be until 1957 that a Public Health Service report called for sales restrictions, health warnings and advertising regulations.

Those not afraid to speak out against smoking gained some traction, but the tobacco industry retaliated by introducing filtered cigarettes to allay the fears of current and future smokers. Congress continued to favor the industry and to this day, celebrities romanticize the disgusting habit by either smoking themselves or pretending too. (Some actors even pick up the habit after playing the role of smokers!)

Smoking Destroys Your Body And Mind At The Same Time

Despite different conclusions, most studies link smoking to diseases that involve the cardiovascular and pulmonary systems. Tamper with these and your ability to concentrate and remember plummets.

Why? It’s because smoking:

And if all that wasn’t bad enough enough, these effects of smoking …

Okay, I’m probably exaggerating, but a lot of evidence supports this claim. Sure, smoking tricks your adrenal medulla into blasting out a bit of dopamine and epinephrine, but for the average smoker who sucks in nearly half a cup of tar a year …

Smoking Is Suffocating Your
Cognitive Functioning To Death!

So what? What’s so great about being intelligent and mentally capable anyway?

I’m glad you asked because intelligence and memory work together to form your entire personality. In short, you need memory and intelligence to:

I think you have to agree that ruining your memory with smoking is complete madness.

The Biggest Lie Smokers Tell Themselves
About Concentration And Memory

Of course, smokers love to claim that smoking helps them in each of these areas. But in reality, even just a few hours without nicotine has been shown to severely damage verbal and visuospatial memory. This state is called withdrawal and many nicotine addicts may need nine weeks or more without smoking to sail beyond the torrid waters of depleted intelligence.

Of course, the extent to which any individual experiences these pains depends on a lot of factors, including baseline indicators of intelligence, including:

All this means that …

It Only Seems Like Smoking Helps Improve Your Memory

In reality, smoking stops withdrawal from messing with your concentration and memory, specifically working memory.

By working memory, I’m referring to Alan Baddeley and Graham Hitch‘s model. They described memory as a Central Executive System with three structures:

When nicotine withdrawal gets rolling, it interferes, it messes with each of these bigtime.

So even though some evidence shows that using mnemonics may combat the effects of withdrawal, you’re better off not smoking at all.

I’m not going to sugar coat this or make elaborate promises. Getting off the Demon Nicotine ain’t easy. But as a former working hypnotists, I think these tips can help you if you want to quit.

Hypnosis, as Kreskin once defined it, is nothing more than the acceptance of a suggestion. If you take this definition to heart, then you instantly realize that we are all hypnotizing ourselves and others all the time. The real question is …

How do you get yourself to accept the suggestion not to smoke.

Instead, the hypnotist or self-hypnotist helps raise the ego to overcome the effects of withdrawal and resist the temptations of addiction. Hypnotists harness the power of the imagination to achieve this feat by eliciting the language of their clients, adopting their body language to create rapport and using relaxation inductions to increase trust and the acceptance of suggestions.

A hypnotist might hear that you hate spending money on cigarettes above all and then have you imagine setting stacks of cash on fire after feeling the weight of your hard-earned wealth in your hands. Or if you mention disliking wheezing and coughing, the hypnotist might help you exaggerate that suffering in your mind and then replace that experience with the bliss of physical reaction.

The hypnotists then compliments these states with ego boosting statements that help the client keep feeling empowered over the next 72 hours, which tend to be the hardest when a person quits.

2. Drink Tons Of Water And Devour Acres Of Fruit

It helps to detoxify during those first 72 hours, so many hypnotists will send you home with the instructions to keep hydrated and get your sugars from natural sources instead of candy and pastries.

You might gain a bit of weight from the fructose, but not as much as you would from refined sugars. And chocolate bars and other sweets will only make you antsy, impulsive and thereby more likely to pop a cigarette in your mouth and light up.

It might be hard sitting still, let alone getting to sleep, but with The Ultimate Sleep Remedy, you at least have a fighting chance. I can’t reproduce the entire book here, but one technique you can try is Shavasana. In its simplest form, this practice involves nothing more than laying on your back and practicing total stillness for as long as you can.

Go for a walk. Do pushups. Even just working at a standing desk provides beneficial exercise. You can also hang out with non-smokers and visit smoke-free places like art galleries and museums.

These activities follow the powerful “don’t go where it’s slippery” principle. If you make it impossible to spark a cherry, you won’t wind up inhaling junk that ruins your body and mind. It’s that simple.

Lately, I’ve been using the Wim Hof Method and a few other techniques. These exercises fall under physical fitness, but belong to their own category because they strengthen your lungs, improve oxygen circulation and develop your concentration while hopefully distracting your mind from nicotine cravings.

Sit just to sit and also combine meditation with breathing exercises and even do both while walking.

Although you might feel too fidgety to memorize playing cards or foreign language vocabulary (LINK 15 reasons), this technique pays off.

Because the more you experience success with mnemonics while distracted, the more successful you’ll be when using them post-addiction. That’s just a hypothesis of mine, but I think it’ll prove true. When I’ve practiced card memorization in noisy places, for example, I wind up getting crazy better results later when I do the same drills at home.

Are You Ready To Serve Your Memory By Quitting Smoking?

In sum, you can stop smoking. When you do, you’ll not only improve your physical health, but also the strength of your mind. Even better, you can use the art of memory and mnemonics to help you get through it in combination with self-hypnosis or with the guidance of a good hypnotist who doesn’t BS you about what’s really going on.

No matter how you quit, I know this general information and these tips will serve you and I look forward to hearing about your success.

In the meantime, stomp this habit out of your life and get busy using memory techniques to help keep the cravings at bay using my FREE Memory Improvement Kit starting right now.

The Surprising Truth About Hypnosis And Memory Improvement

Foods That Improve Memory You Can Pig Out On