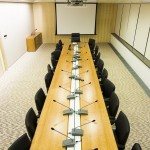 I had a great time at turning the Frankfurt Musikmesse into a Memory Palace recently.

I snapped up a floor plan upon arrival and determined that I was going to consume as much of the convention hall as I could for future memorization use.

It’s all part of knowing how to use a Memory Palace to remember more of your vacations.

Of course, this music convention took place in a pretty indistinct location. That provided an interesting challenge because its contents are always changing from convention to convention.

So, taking a tip from my friend Joshua Smith, I “lowered the hurdle” on myself.

Instead of memorizing the entire layout of the convention center, I decided to pay attention to the individual booths within the hall where the guitars and basses were on display.

By excluding drums, winds, brass, music books, etc. I gained more. And I now have a fantastic new Memory Palace.

Following inner guidance like this reminds me of The Wise Advocate. It’s all about how to be a better leader of our life.

Don’t Lose Your Memory Palace To The Details

But keep reading to learn how I originally snagged myself and then ironed out the details so that this new Palace is as effective as possible. It started out with some complications, as I’m about to admit.

Back to the Frankfurt Messe:

The first thing I did was to notice that the hall was a large square with two entrance/exit portals on two of the walls. Next, I counted the number of corridors running between the portals and took note of the booths.

I won’t bore you with the names of the different guitar companies, but for me it was an essential step to focus solely on the ones that I recognized.

The Most Important Part Of The Memory Palace Creation Process

Because pattern recognition is a key component of the Magnetic Memory Method. We want to use stations in our Memory Palaces that come to mind in the most natural way possible. We don’t want to have to expend any energy whatsoever in order for us to find the next station along our journey.

Therefore, my goal was not to memorize guitar companies with which I was familiar, but to simply take note of where the guitar companies I was already familiar with were stationed along a journey up and down the corridors.

I now have fifteen new stations in that hall alone, which is a great achievement.

I also made sure to take note of the journey from the guitar hall to the front entrance of the convention center, giving me five new stations.

Then there was the transit stop where I grabbed the tram to the Hauptbahnhof (main train station) and the short journey to the apartment of my friend where I stayed.

How to Expand A Memory Palace

This gives me 5 more stations in my Musikmesse Memory Palace.

Of course, I would be remiss not to use my friend’s apartment now that I’m familiar with it. By starting at a terminal station within his apartment, I can put together another 10 stations before leaving his door.

Now, thinking out loud about this, I’m mixing two journeys and they are coming at odds with one another.

I can’t leverage the strength of this Memory Palace by moving towards my friend’s house from the Musikmesse and then trapping myself in his apartment.

Instead, I need to use the inside of his apartment as the beginning of the journey and then move to the entrance portal of the guitar hall. This way, I have a fluid journey in which I’ll never be trapped and never cross my own path.

This, dear Memorizers, is an example of how I think these things through, expand and iron a Memory Palace Network out. Here are 21 more study tips that will also help you.

It’s part of the principles of Preparation & Predetermination that I talk about in my books.

It’s also part of the ongoing process of constantly gathering new Memory Palaces so that there are always new mental constructs based upon familiar territory.  The more you have, the more material you can memorize.

Digital Amnesia: 5 Ways To Stop Google From Ruining Your Memory
Aphantasia: Develop Your Memory Even If You Cannot See Mental Images
9 Brain Exercises That Ensure Memory Improvement
15 Reasons Why Learning A Foreign Language Is Good For Your Brain
7 Killer Memory Improvement Tips For Effortless Conference Interpreting
17 Reasons Going To Art Galleries Will Improve Your Memory
11 Reasons You Should Reread At Least One Book Every Month
How to Build A Memory Palace: A Scientifically Proven Approach
The Memory Palace of Matteo Ricci
How to Remember Things: 21 Techniques for Memory Improvement