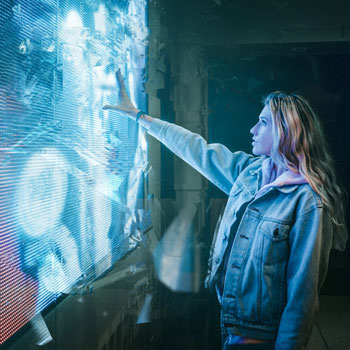 If you’re looking for a review of the Mega Memory program, you probably just want to know: Does it work?

The answer is yes and no.

If you’re a beginner, this book will almost certainly help you understand the basics of association and develop a peg system.

If you’re an intermediate user of memory techniques, it might give you a few insights.

If you’re an expert mnemonist, it probably won’t add much to your skillset. But you might find it useful and interesting for historical purposes. You can also consider it a chance to review core concepts and potentially think about the memory techniques from another angle.

And that’s because memory techniques are not things that do anything. It’s people who put the techniques into use.

Just as no machine or dumbbell at the gym builds any muscle until the owner of the muscle puts the weight into motion, no memory technique does anything unless you put it to work.

When you put any memory training to work, you can almost certainly expect:

But it’s you who does the work to learn the techniques and put in the practice. (How could it be otherwise?)

With this core principle in mind (one that is true of all memory courses on the planet), let’s take a deep dive into what Mega Memory is and think about whether or not it’s worth your time.

Mega Memory by Kevin Trudeau: Everything You Need to Know

First, we’ll clarify what exactly Mega Memory is (and is not).

What is Mega Memory?

It’s important to know that there are multiple versions of this memory training. These include: 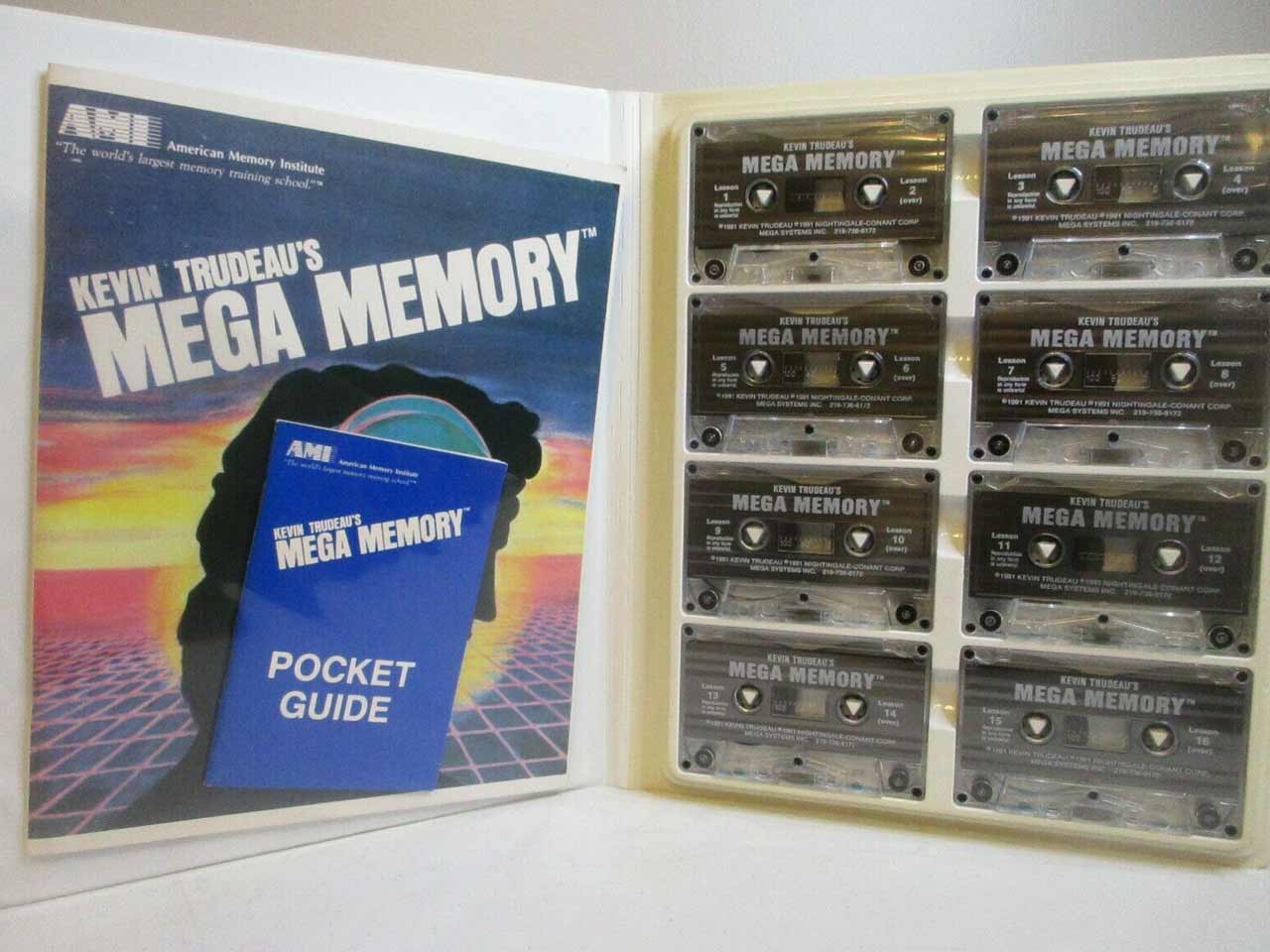 Some of the audio editions may or may not include:

In this review, I’ll be referring to the print and audio editions.

For all intents and purposes, they are essentially the same. The audio program has the benefit of the speaker’s enthusiasm and asides, though some listeners may find these aspects tedious and even grating.

The book opens with a very important list of acknowledgments and thank yous. 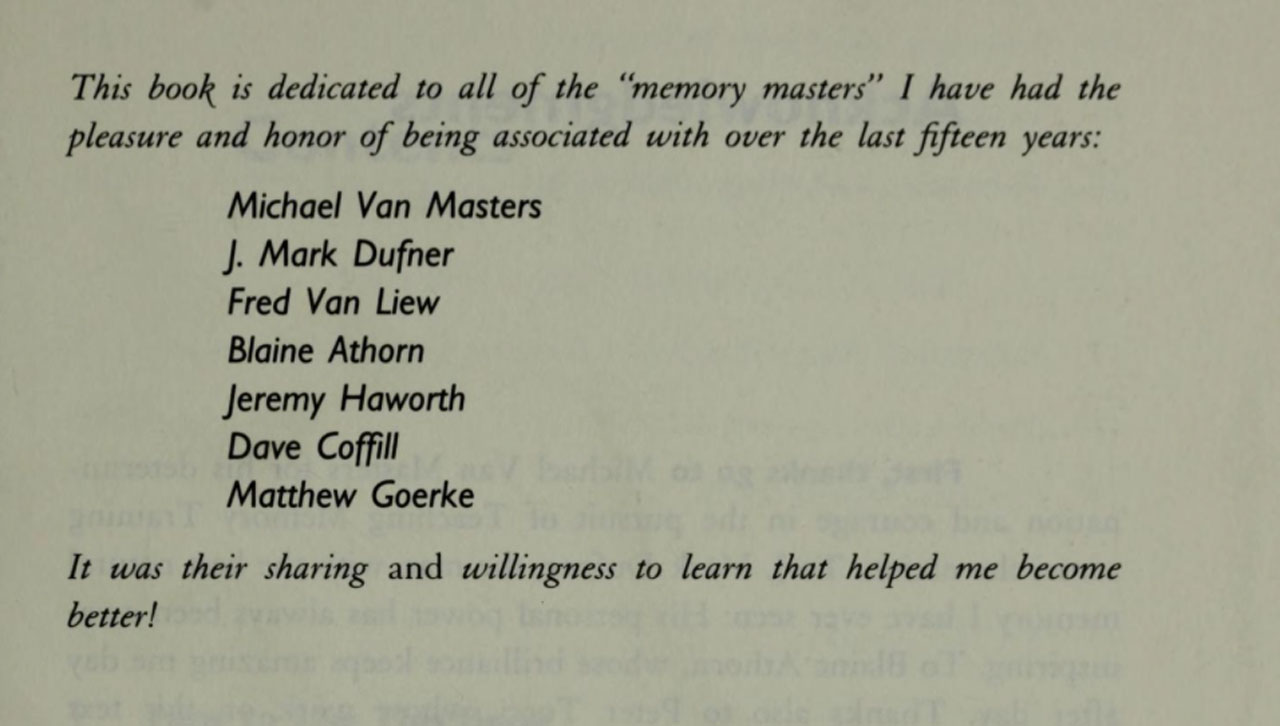 I point this out because the creator, Kevin Trudeau, never claims to have invented or even innovated any of the techniques taught in the book. Instead, he places himself in the position of the learner, which is what all of us should strive to be for the course of our learning lives.

Unfortunately, many reviewers often state that there is “nothing new here.” Such assessments are problematic for two reasons:

It’s dangerous to pay attention to such reviews because you simply don’t know what you don’t know.

This raises the question: What can you expect to know about memory after you go through Mega Memory?

The program opens with tips on how to make the most out of the learning experience. You are given ground rules, which are generally good to follow for many courses of study.

Trudeau also asks you to self-test your “teachability.” This is important because some people just aren’t willing to do what it takes to get results from memory improvement courses. 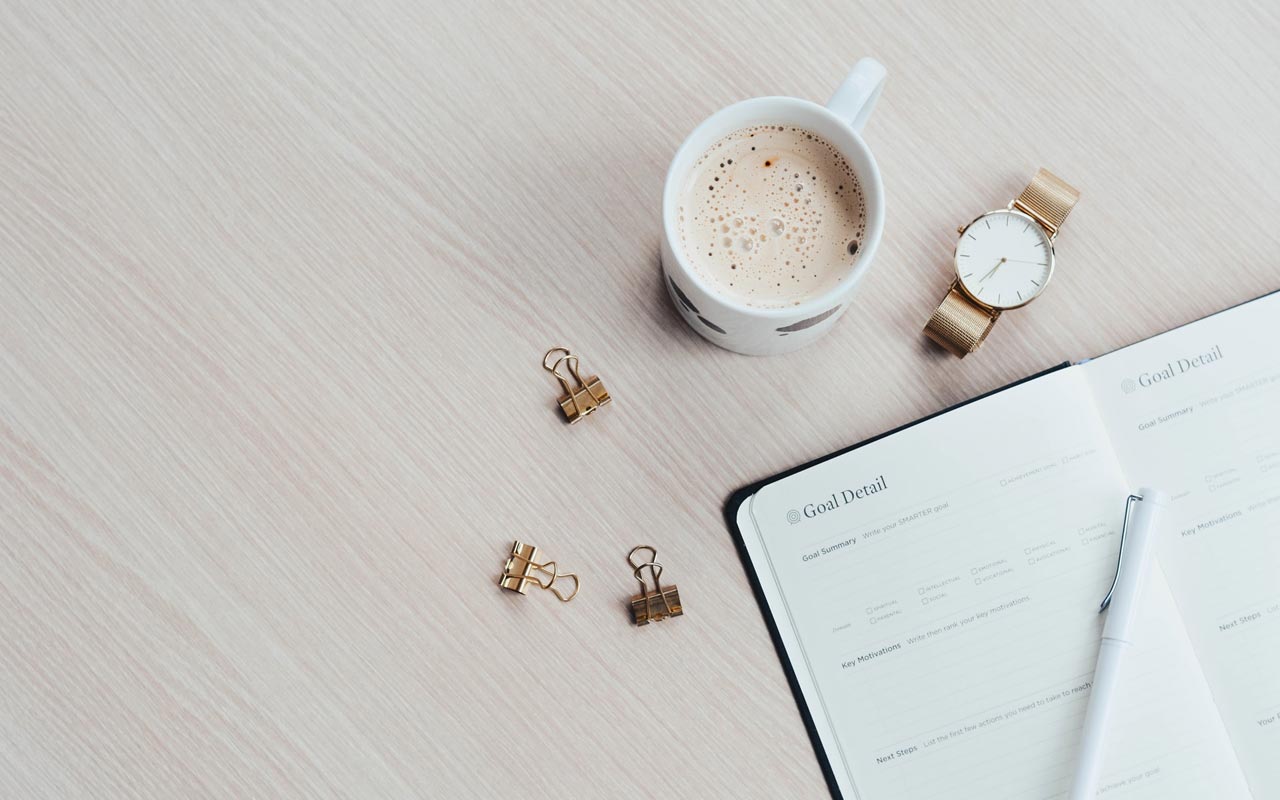 This point links to an insight given by David Berglas in A Question of Memory. In this book, Berglas describes memory not as a “unitary mechanism” or thing — instead, memory is a behavior. It is something we do and how we do memory matters a great deal. 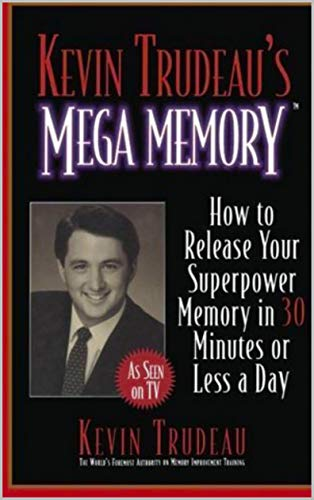 You also get lists of words for stimulating what amounts to your own 00-99 object list based on the Major System.

You also get an extensive “name guide” to practice with — something that might be useful for even the advanced practitioner who wants to practice in a park without the distractions of a smartphone or other device that goes online.

Who is Kevin Trudeau?

Unfortunately, many people missed the opportunity to learn from this book due to a few colliding issues: 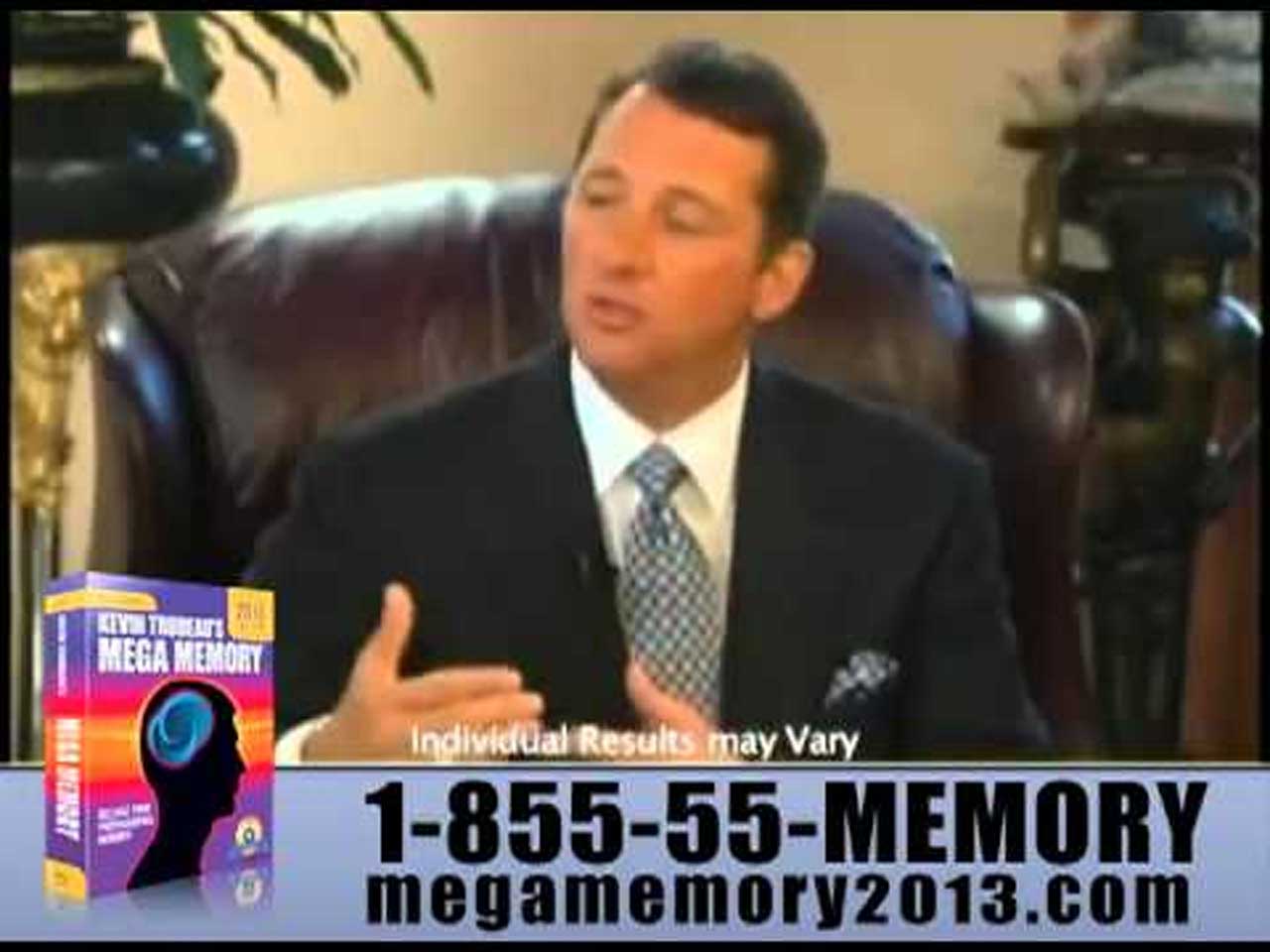 As mentioned above, Trudeau hasn’t created any of these techniques or introduced anything “new.” It’s impossible for his behaviors to reduce the value of the techniques because they were never his in the first place.

Will Kevin Trudeau enter the memory market again when he gets out of prison? It’s hard to say, but a recent report tells us that he’s been in touch with a judge to try and figure out how he’ll survive once he’s a free man again.

Mega Memory Review: Can It Help You With Memory Improvement?

The beginner who reads the book or completes the audio program thoroughly should walk away with a solid set of memory skills to practice.

If you follow the program and bring your own information you need to memorize, the book should deliver what it claims. But if you struggle, that’s no reason to panic. The next book or program will help fill in any gaps you still have — as will practice. When you’re ready for more, I’d suggest some of these Memory Palace books. Frankly, I don’t think anyone should hang their success on just one book or course.

In fact, as you’ve seen, Trudeau himself lists several teachers he’s benefited from.

The fact of the matter is this:

Who you choose as your teacher does make an impact. You need to connect with their voice (written or spoken) and the level of detail they bring needs to connect with where you currently stand with your skills.

Whereas some aspects may be too pedestrian for you, others may be too challenging. This is normal.

Some people will interpret Trudeau’s enthusiasm on the audio version as “hype.” A more charitable interpretation is to recognize that these techniques do take some effort and many people lack initiative, energy, and even the courage to take action.

As one reviewer on Goodreads named Philip puts it, Trudeau “could charm a bird into paying for flying lessons. It is great to experience as rhetoric alone.”

This comment is apt because memory techniques have historically been connected to the art of persuasion. I demonstrate this with reference to the marketing of memory in detail in my analysis of Rhetorica Ad Herennium:

Fortunately, memory is not as tough a sell as it used to be, given the success of the World Memory Championships, Moonwalking with Einstein, and various specials like Memory Games on Netflix.

But even with all of these wonderful and encouraging demonstrations of the absolute validity of memory techniques for each and every one of us, many still need the tools of persuasion to get started and keep going with the practice.

At the end of the day, Mega Memory is probably best considered as a product for beginners. But there’s no guarantee you’ll put in the effort needed to get the results. This means that the decision is not whether it “works” or not.

There’s an abundance of evidence going back thousands of years that memory techniques are effective. This means that the real question is whether YOU are going to learn and practice the techniques.

As I often like to say, carpe diem but caveat emptor. If you can get your hands on Mega Memory, I’d say you’ll do just fine and be able to spot patterns with how other memory training products can help you out.

Perceiving the patterns could itself be the boost you need to start applying the techniques consistently.

So what do you say? Is this a training you want to try? Or have you already gone through it and put its presentation of the techniques into action?

And if you want a more in-depth look at how you can use memory techniques to improve your memory, pick up your free copy of my memory improvement course today!