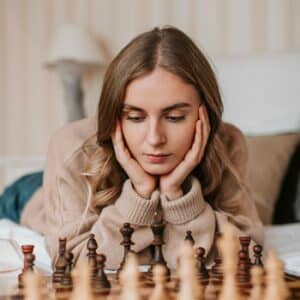 If you want to become a chessmaster, you’ve probably looked into how to memorize chess openings before.

You’ve heard about other chess players holding hundreds, if not thousands of moves in long term memory.

You’ve drooled over the legendary tales of people like Joseph Henry Blackurne demonstrating a Knight’s tour while blindfolded.

And you want this level of skill.

You can use the same techniques to memorize endgame themes and strategies too.

By using the mnemonic strategies discussed on this page.

Some of the suggestions I’m going to offer are unorthodox. And they require some experimentation.

But if that’s okay with you, then I’m confident you’ll find reading this post well-spent.

So when you’re ready, get your chess pieces in hand and let’s dive in!

How to Memorize Chess Openings in 5 Steps

Some of the initial steps I’m going to suggest won’t seem like they have to do with memory. But they do.

And research shows that they are integral parts of why and how chessmasters excel at the game.

That’s why we’ll start with these aspects.

One: Exercise Your Spatial Perception

Perceiving space is a cognitive ability that we are born with.

However, when it comes to how to memorize chess moves, you want to make sure that your spatial memory for the board is strong.

You will also want to turn the board into a Memory Palace.

As a simple exercise, get out a chess board.

Run your hands along the edges. Get a good sense of its size as a field.

Next, measure with your thumb and pointer finger a couple of the squares. Then, navigate with your hand held in this shape across the board. This will exercise your sense of where each piece might sit during a game.

You can also play out a Knight’s tour or an expression of Warnsdorff’s Rule.

Don’t worry if this exercise sounds silly. It’s purely a spatial memory exercise based on haptic memory findings that have been in use for thousands of years. 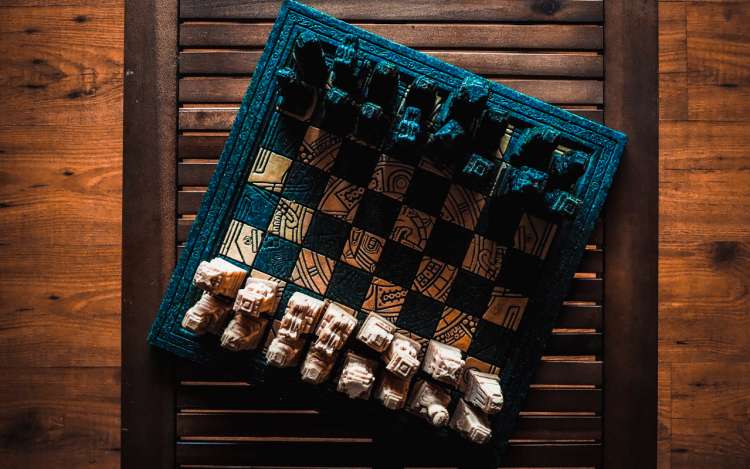 Scientists have shown that many chessmasters have strong verbal abilities. In fact, using words has been demonstrated as the key way the best players remember multiple moves.

This finding means that instead of trying to remember abstract shapes, players mapped out word-based associations on Memory Palace journeys patterned on multi-branched “trees.”

One obvious way to work with words is to make sure you know your Algebraic notation inside out.

You’ll also want to know your defences very well, such as the French defence or the Sicilian defence.

But these matters aside, generally working on improving your language abilities has been proven helpful.

So all mnemonics aside, make sure that you’re learning a language. And if you add memorizing vocabulary to the mix, all the better.

I’m going to suggest that you learn how to memorize numbers. This will help you mentally label positions so they are easier to memorize.

The classic approach to this simple skill is called the Major System. If for some reason it doesn’t suit you, give the Dominic System a look.

Either of these will give you an easy way to associate numbers with words. But if you really want to go for gold, learn a 00-99 PAO System.

You’ll also want to develop your skills with the pegword method. This powerful approach will give you an image for each letter of the alphabet.

How does it work for chess?

Let’s take something simple for an example. This is the Double King’s Pawn Opening: 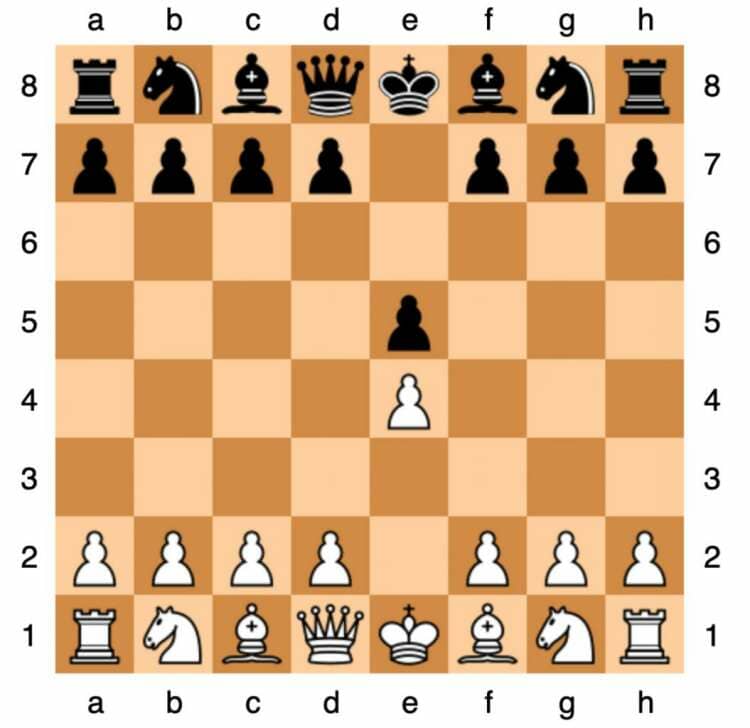 In my case, I would see Ernie from Sesame Street pushing a sailboat at a seahorse. To remember that both pieces are pawns, both the boat and the seahorse could be pea green, or otherwise related to peas.

Remember what I said above about exercising your spatial and verbal memory?

This is where those skills start to work in combination with memory scientists call elaborative encoding. 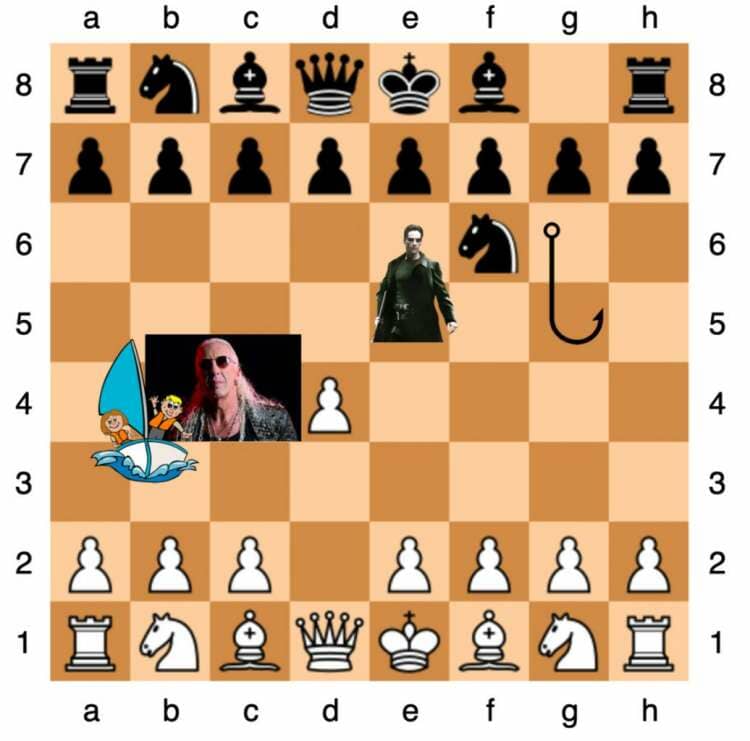 Based on my mnemonics for these letters and numbers, I imagine Dee Snider on a sail boat for D4 and Neo with a fork and a fishhook for Nf6.

Apply this approach to memorize as many chess openings as you wish.

Chessmaster Nikolai Krogius identified three powerful categories of mental imagery related to chess you need to know about. You’ll find them in his book, Psychology in Chess.

A retained image is like a ghost or the Ugly Sister Effect. Your memory is basically messing with you because you “forget” that a piece is no longer somewhere you remembered.

An inert image is the mental state a player adopts when they think they are in a winning position. They relax without considering all the ways their strategy could fail.

Finally, a forward image is the ideal image to have. This is when you “branch” out and consider every possible outcome of the move you wish to make.

However, this point may be important:

You don’t necessarily want to envision the entire board with all pieces on it and gradually being removed. Instead, you will probably want to focus just on the key pieces involved a few moves out.

Because you can’t control every response, and even if you could visualize them all, you won’t be able to afford the time in speed chess.

Now that you’ve learned these memory systems, memorize 5-10 games in their entirety to practice.

The more games you know by heart, the more you’ll be able to draw on these references when playing. 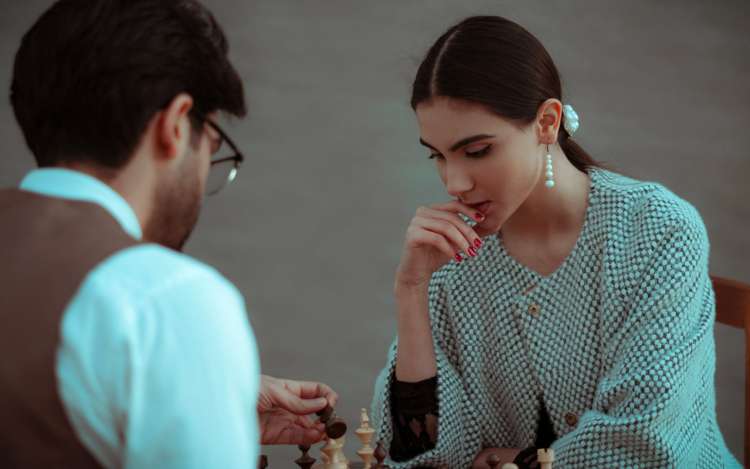 Which Chess Openings Should You Memorize?

Given that there are over 1000 chess openings, it’s probably a good idea to be selective. At least in the beginning.

But you also need to consider your style. Do you prefer quiet positional play or tactical play? Knowing these categories can help you decide which openings you want to memorize first.

The most common and important chess openings are:

Obviously, you’ll want to supplement your chess memory by also memorizing all of the most common and uncommon defenses to these openings.

And now you can.

How to Remember Chess Moves

This is where the Memory Palace technique really shines. To learn all about it, please consider registering for this free course:

So far we’ve talked about memorizing individual openings. These are easy with reference to a single board.

Using a Memory Palace, you can sequence them out on a station by station basis using the method of loci.

As the authors of Blindfold Chess point out, most accomplished chessmasters throughout history have combined it with the numbering and letter techniques I shared above.

How would this work?

It depends on the nature of the game, but some people have suggested that the average chess game involves between 40-70 moves.

This would require that amount of stations in a Memory Palace. Since you can get at least 9 moves in a room, then most houses will accommodate an entire game. 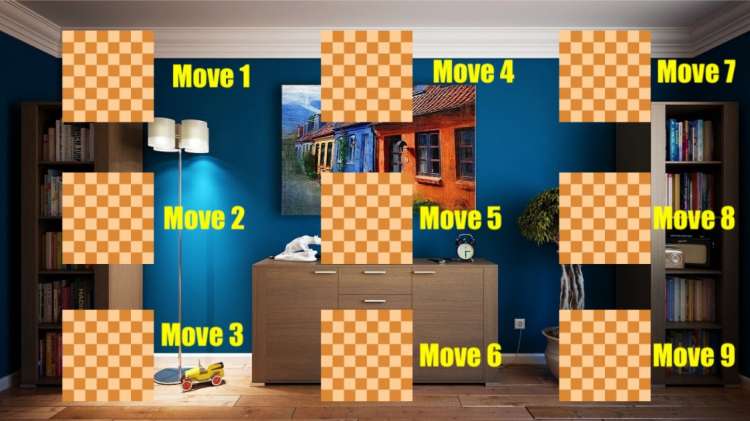 Of course, you’re not going to memorize the entire chessboard in each location. You’ll just be memorizing the notation for each move.

And if you want to memorize multiple boards, no problem. Just use multiple Memory Palaces.

Chess and Memory Go Together

When you look into the history of chess, you quickly discover that the great chessmasters have been into using memory techniques for a very long time.

And no doubt. As great as chess is for enhancing mental performance in many areas of life, it’s even better with mnemonic training. And it only makes sense to throw in other brain exercises for good measure.

At the end of the day, all of the activities we discussed today won’t amount to much if you don’t play chess.

I would suggest a variety of game situations, online and in person, against humans and versus the computer.

And as you apply memory techniques to improving your chess knowledge and performance, I’d love to hear how things go for you. Or if you have any questions, feel free to post them below.