Have you ever had a fact you know like the back of your hand stick on the tip of your tongue?

And has your presque vu (as the French call it) ever been so bad that a completely different thought came to mind?

It Completely Took Over The Show!

It’s closely related to what mnemonists and memory champions call “ghosting.” I prefer to call it “Magnetic fossilization.”

These problems happen when people try to re-use their Memory Palaces.

But when you re-use a Memory Palace… none of these effects should ever pose a problem.  Here’s why:

But if you still consider this issue and struggle to reuse a Memory Palace, here’s the good news:

How To Turn That Interfering Ugly Sister Into Prince Charming

The Ugly Sister Effect gets its name from the Cinderella fairy tale. In many versions of the story, every time Prince Charming tries to get hold of Cinderella for a smooching session (and perhaps a little more), her ugly sisters intervene.

Not very cool of those ugly sisters, is it?

The reason the tip-of-the-tongue phenomenon gets this name is because when this happens with your memory, there’s a competition going on. It’s a struggle between the cue that causes you to look for the memory in the first place and the target information encoded somewhere in your mind.

Worse, these ugly sisters are other information that comes to mind. So, for example, let’s say the song Big Yellow Taxi by Joni Mitchell comes to mind, but you keep coming up with Joan Baez’s Diamonds and Rust instead.

Annoying, isn’t it? Well, as great a song as Diamonds and Rust is, in this case, it’s an ugly sister.

Good News: There’s A Well-Known Way To Deal With This Problem

The method has two parts:

2) Carry on with the discussion or change topics. The target information will probably pop into mind shortly after, or at some point in the future when it’s no longer relevant.

The important thing to realize is that these …

Now, when it comes to the world of mnemonics, we use Memory Palaces to store information.

We do this by using crazy, weird and exaggerated imagery to encode the information we want to memorize. No information exists that you can’t work with using these procedures.

This fact isn’t to say that you can achieve a state of perfection in which your mind instantly creates the best possible associative imagery and snaps everything you want to memorize flawlessly into place in your Memory Palaces.

Rather, you’ll find that you need to massage different kinds of information differently. Sometimes you’ll use a Bridging Figure, other times you’ll use a cartoonish stream of images across several stations. You need to be flexible, which is why the Magnetic Memory Method is a method, rather than a system. It teaches you to respond to information in an inviting way, to cradle it, to kindly Magnetize it in a way that makes it willing to stay.

Some People Want To Memorize Oodles And Oodles Of Information …

… but they only have a limited set of resources upon which they can base their Memory Palaces.

Well, no problem. On the How to Find Memory Palaces episode of the Magnetic Memory Method Podcast, we talked about your endless fountain of Memory Palaces just waiting for you to claim them.

And in the episodes about virtual Memory Palaces you can find here and here, you can learn about making Memory Palaces based on nothing more than your imagination.

Or, dear Memorizers, you can experiment with reusing the same Memory Palaces over and over again.

And when that happens, you might find yourself running into some Ghosts of Memory Past.

Memory champs and mnemonists call this phenomenon “ghosting.” But normal people use this term too.

For example, here’s part of a letter I received a few days ago regarding “images too vivid leaving ‘ghost images’”.

Here’s what she wrote:

There are Memory Palaces I reuse like an etch-a-sketch, such as the cars for phone numbers (I use the Dominic number system) or my office to remember a grocery list or even the walk to the local shops to remember a speech. 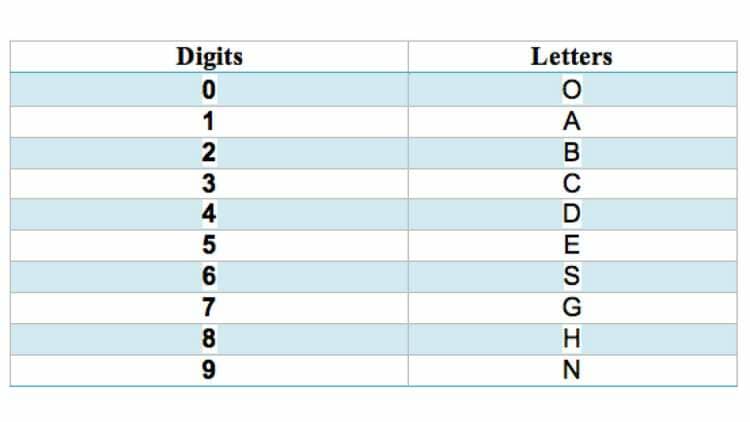 The Dominic Number system on a graph

My problem is that the images from the last time I used that Memory Palace are often very vivid still.

I can still see Einstein on his surfboard for example (Einstein being number 15 as you know) so the next time I picture Einstein in the drivers seat I can still see him surfing then it all gets muddled up with a previous set of information.

I have tried using the alphabet or months of the year as placeholders, but the abstract letters are not as memorable as locations. Could I have your advice?

Thanks and kind regards.

The first thing I would say is that using the alphabet raw for Memory Palaces is a good idea, but it’s going to take lots of practice. Better – or at least less abstract – would be to use playing cards.

The linear order of the cards in this manner would serve as an organizational device similar to the alphabet. The advantage is that you can rest more on an Ace of Spades than on the letter A. This ease happens because the Ace of Spades and cards in general are more palpable.

If you’re going to monkey around with this approach, start small. Create a row of five to ten Ace of Spades and let them hover like flying carpets. Or if you prefer, lay them out on an imaginary forest path, a corridor, or whatever else feels right for you.

It will help too if you can somehow bolt these flying carpet cards to a distinct journey. So, using a process I teach in more detail in the Masterclass called the “Telesynoptic Memory Palace”, you can “bolt” the cards onto a preexisting Memory Palace station.

This procedure is more challenging than others. When you travel the journey, you now need to reconstruct both the original Memory Palace and the added feature of an Ace of Spades at every station to differentiate it from the original version of the Memory Palace.

Using a deck of cards like this with your Memory Palaces is one way to deal with ghosting. But I believe that, for most of us who just want to get in with things and skip the radical experimentation, there’s an easier way.

Almost all issues with memory work using mnemonics arise from tension in the body and mind. Or, worse, what you might call your “monkey mind.” These monkey mind meditation tips will help.

Worse, people like to get worried about future skills when they haven’t conquered the basics yet. Let’s discuss that together here:

So … how do you overcome the fears of danger you might be experiencing?

Never, ever memorize if you haven’t spent a bit of time meditating, doing some progressive muscle relaxation and ideally, Pendulum Breathing.

Next, stop thinking about those intrusive images as ghosts or ugly sisters or any other negative term. That simply does not and cannot help.

Rather, think of them as wonderful, beautiful and thoroughly Magnetic fossils. They should be treated with love and respect at all times.

And without fear, as we discuss in this video:

Because they’re living proof that …

You Can Learn And Memorize Anything Using Nothing More Than The Elegant Powers Of Your Natural Imagination!

Use those preexisting images to practice what we call in the Magnetic Memory Method Masterclass, “compounding.”

So instead of rejecting these glorious proofs that your imagination is happily assisting your memory by coding and decoding information, get that associative-imagery on the side of the new information you want to memorize. In other words, work on letting the old memories support the new ones. If Einstein comes up with old information, invite him to help you with the new.

Compounding is especially powerful if you’re using and reusing Memory Palaces for language learning. For example, when I study and memorize Spanish words and phrases, I don’t have to rely on English alone to benefit from compounding and homophonic transliteration. I can also use, for example, the German words and sounds I know.

In fact, at least in my experience, German is especially helpful for creating powerful associative-imagery for Greek.

Now, all of the magic Magnetic Compounding creates assumes that you’ve correctly used Recall Rehearsal to get the target information from your previous pass through the Memory Palace into long-term memory.

If not, do that first before you use the power and the glory of Magnetic Memory Method compounding.

If, failing all these techniques, you still struggle with ghosting, ugly sisters, fossils or whatever you want to call them …

The same way you can use your imagination to create Memory Palaces based on real or imagined locations, you can imagine yourself with Pine-Sol or Mr. Clean and a mop. See yourself doing the work of getting your Memory Palaces fresh and clean for new uses.

Again, relax. Warm up with a bit of card memorization or the childhood memory exercises I gave you a few weeks back.

And then get busy. In fact, try everything I’ve talked about in this issue of the podcast. Memory athlete and memory expert Idriz Zogaj and I have discussed this too for your benefit.

Because nothing will help you more than one simple little skill. To practice it, all you have to do is …

Harness The Value Of Practice

Even if you struggle …

Even if you sweat …

Even if you strain …

And, yes, even if it causes you pain …

Practice is the only way to improve …

Even If You’re The Best Memorizer In The World!

There’s no turnkey, set-and-forget engine that keeps running once you learn and use memory techniques as part of your daily life.

No. What you’re doing is learning to play your memory like a musical instrument.

Leave that guitar or flute or tuba or whatever you want to play in its case for a week, a month or a year and you’re going to feel your talent slipping.

But practice every day and run your scales, arpeggios and chord studies every day with a few new challenges thrown in and you will always grow.

At the very least, you’ll maintain your state and have the potential to push the limits of what you can do now.

Of course it does.

So now that our exorcism of all those evil memory spirits and ugly sisters is through, I’m going to go watch Ghostbusters.

What are you going to do?

The Memory Palace of Matteo Ricci

The Memory Code: Prehistoric Memory Techniques You Can Use Now

How to Keep A Memory Journal And Remember More

Older and still useful videos on re-using your Memory Palaces: