How to Memorize the Books of The Bible: 7 Easy Steps 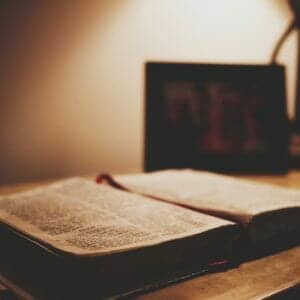 There are a number of ways to memorize the books of the Bible.

But few are as direct and streamlined as the approach you’re about to discover.

It’s also incredibly robust, far more so than using a song or flash cards to memorize them.

Does the technique you’re about to learn require a bit of setup?

But that’s going to feel like a drop in the bucket when you realize you can use the same technique to also memorize any verses from the Bible you wish.

How to Memorize the Books of the Bible in Order

There are 66 books in most modern Bibles. You can find them in order based on the Old Testament and the New Testament using this handy list.

Some of the names will be familiar to you already, but memorizing even the most well-known names in order can still be a challenge.

Other names will be difficult, but I’ll also show you how to deal with harder words like Zephaniah. Soon, they will be very easy to remember.

But let’s focus on memorizing the order first.

One: Learn The Memory Palace Technique

Learning to use a Memory Palace is essential for all learning tasks that involve large amounts of information.

I do have one student who memorized 66 Psalms in a way he felt was without a Memory Palace. However, as we spoke, it was clear that the same basic use of spatial memory was still in place. Logically speaking there’s no getting around the method of loci for this kind of goal.

To use this technique, you will create a journey throughout a familiar location. This journey will have space for 66 units of information, one spot for each book of the Bible.

Depending on the room you choose, you can fit this journey into one room by using four walls something like this: 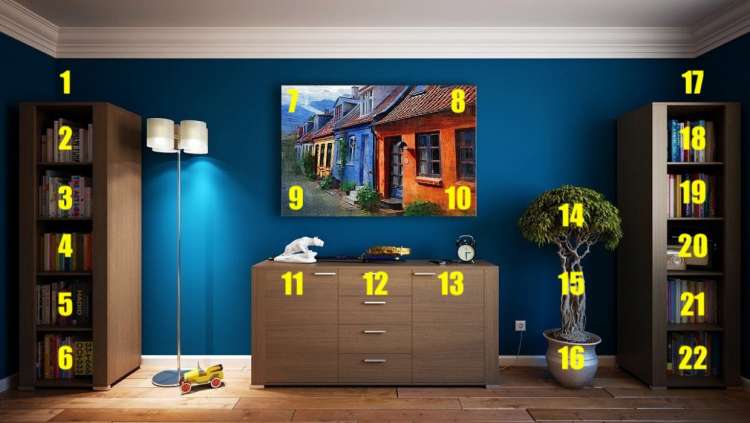 This is one example of how you can start structuring a Memory Palace for memorizing the name of every book in the Bible.

If you’re just beginning with this technique, this amount of information crammed into a single room might be too cramped.

Also, I would suggest you consider having two Memory Palaces. One for the Old Testament and one for the New Testament. In this way, you can work on memorizing their books as two separate learning projects. It will make this learning project more manageable.

The next step is to use your imagination to “pair” an association with a location in your Memory Palace.

For example, you would place an image or association that reminds you of the word “Genesis” in position one of the Memory Palace. It could be a Sega Genesis, or perhaps you remember the Genesis Device and Genesis cave from Star Trek II: The Wrath of Khan.

If those references don’t work, you could even think of someone you know named “Gene,” such as Gene Simmons, the bassist for the rock band Kiss. Even better, you can combine all three of these associations for striking effect when you revisit the Memory Palace journey. 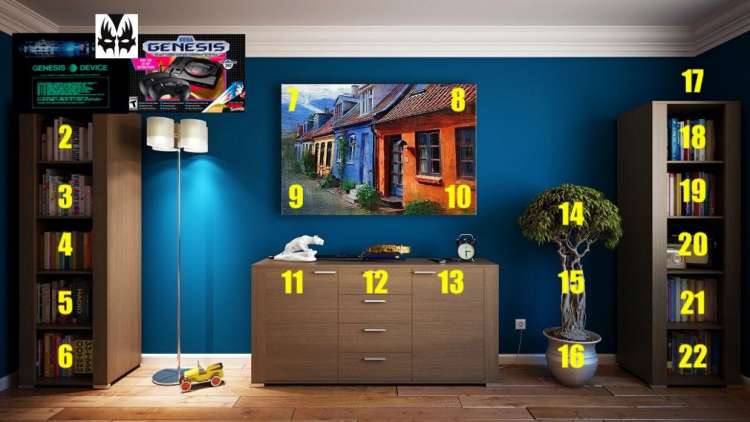 By placing a few words that sound like “Genesis” or are spelled in a similar way in a Memory Palace, it’s easy to remember all the books of the Bible.

Coming up with associations really just means looking at the letters of the words you need to memorize and thinking about similarities.

To start thinking up associations like this rapidly, have a look at the pegword method.

It’s not enough to assign associations. You also want to make them strange and striking using a process memory scientists call elaborative encoding.

So let’s say that you use the example of a dentist numbing your gums to help you remember that the book of Numbers is at position four in your Memory Palace.

To elaborate it, you want to imagine: 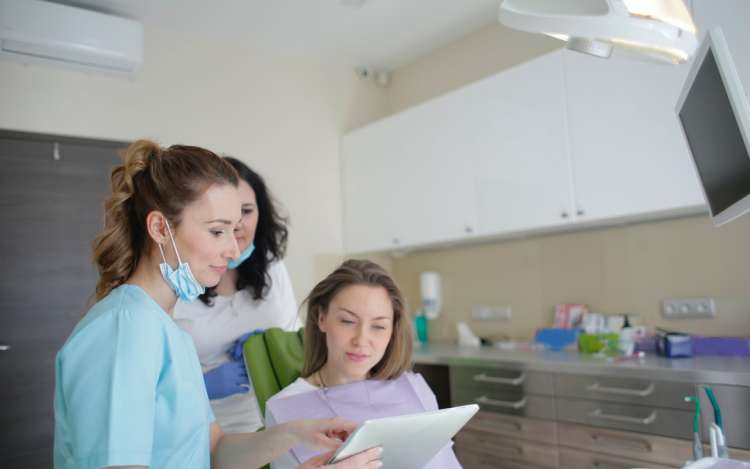 Using everyday life experiences like the “numbing” effect you experience at the dentist helps you remember the Book of Numbers.

These exaggerations only take a second per each book of the Bible. They will help you remember them with greater ease when you think back to where you stored them in the Memory Palace.

How do you know the Book of Deuteronomy follows Numbers?

Often, the Memory Palace journey is more than enough. You just mentally move from station to station.

However, it also makes sense to use the link and story method.

One way you could help yourself memorize the order of the books of the Old Testament is to have the associations act upon each other.

In other words, it’s not just that you have Gene Simmons using a Sega Genesis controller to start the Genesis Device from Star Trek II.

You have this image interacting with the Exxon image. For example, you can have Gene Simmons firing the Genesis device at an Exxon station. 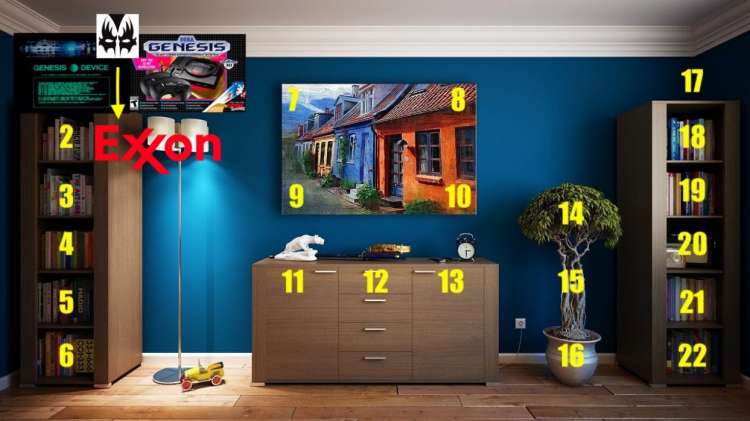 This mnemonic example shows you have you can use the linking method in a Memory Palace to memorize the books of the Bible.

Likewise, you can have someone named Lev or Lee or any “Le” image that makes sense to you fleeing from the Exxon station. By linking the associations from station to station throughout the Memory Palace, you give yourself an extra layer of “recall power.”

Once you have all 66 books assigned with associations, you want to revisit the entire journey a few times to get all of them into long term memory.

We need to do this because memory and learning always require some level of repetition. The Memory Palace helps us manage the repetition and reduce the amount we need.

These patterns will give primacy effect and recency effect to each station in your Memory Palace through a process memory scientists call serial positioning. It’s basically the same thing as using spaced repetition software, but much more powerful.

What makes it more effective than software are flashcards is what is called “active recall.” When we put a little bit of “pressure” on our memory to recall facts we’ve learned, our memories develop much faster.

Learning how to memorize scripture at any level is fun and easy.

But to really go the distance and get the material deep into memory, you want to learn it in context.

To make that process riveting:

During this stage, you can also add facts to the names of the books you’ve already memorized. For example, if you want to remember that Zephaniah is prophetic literature, you can add an image of a prophet profiting to the core image in the Memory Palace.

Seven: A Bonus Step For Those Who Prefer Flash Cards

If the Memory Palace technique is not an option for you, here’s the best possible way to use flash cards.

Instead of feeding yourself the answer on the back of the card, have a drawing that triggers your memory of the word. 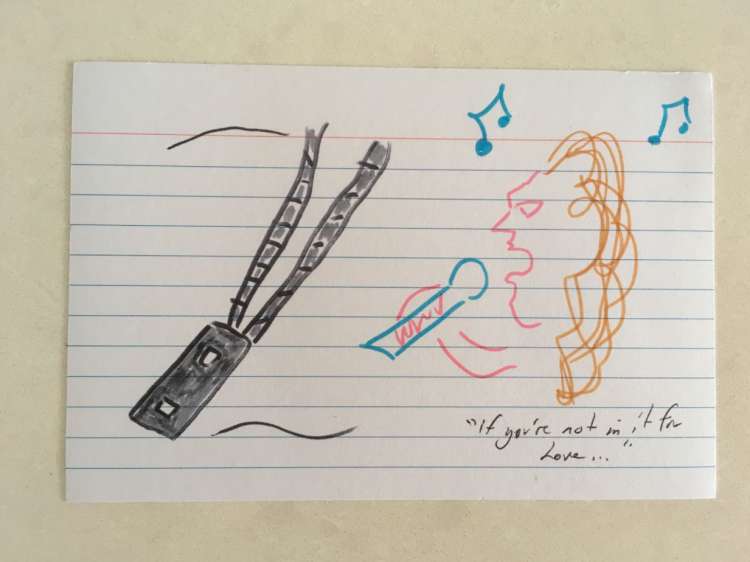 For example, you could draw a zipper to help you remember Zephaniah. You could even cut out a picture of Shania Twain or write her name beside the Zipper.

In the mnemonic example above, I have drawn a zipper and a few lines to suggest the letter “Z.” I’m no artist, but I’ve drawn a singer and given myself a clue by adding some of the lyrics from a very famous Shania Twain song.

Then, when looking at the card, the guessing process helps me form memories because it gives my brain a bit of a workout.

In other words, this form of “memory triggering” creates a brain game that promotes learning instead of cheating you out of it.

But chances are you can learn to love the Memory Palace technique, and this free course shows you how:

Remember All Of The Books Of The Bible With Ease

As you’ve seen, there’s a fast and easy way to memorize each and every book of the Bible.

Sure, it takes a bit of setup.

But given the amount of time and hassle it saves in the end, I’m confident you’ll find the frontloaded effort was well worth it.

The important thing is to embrace the setup. It takes different people different amounts of time, but anyone can do it. And the best part is that each and every bit of information you memorize brings you one step closer to God.

Do you feel equipped to memorize the books of the Bible in order? Let me know in the discussion or feel free to enter any questions you have. I’ll chime in a.s.a.p.

2 Responses to " How to Memorize the Books of The Bible: 7 Easy Steps "