How to Memorize a Prayer in 5 Simple Steps 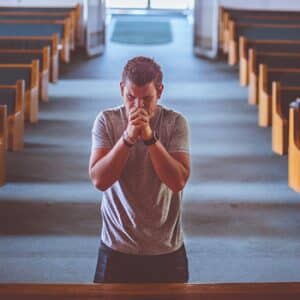 If you want to know how to memorize a prayer, you’re in good company.

I’ve memorized quite a few and recite them every day.

I know some of them in multiple languages.

As do many of my students.

And since others have done it, that means you can too.

But at the beginning, you might struggle with committing even just a few words to memory.

You might never have used memory techniques before and be stuck on old, rote learning myths that do not and cannot serve your goals.

On this page, I’ll give you the exact tactics you need to memorize any amount of prayers you wish, of any length.

Ready to enjoy an unlimited number of prayers committed to memory in ways that are fun and easy?

Prayers to Memorize (and Why You Should Memorize Them)

The first consideration is not how to memorize prayers. It’s what prayers should I memorize?

The most direct answer I give my students who work with scripture is very simple:

Pick whatever prayers make you feel closer to your maker.

Or, if you’re memorizing scripture for secular purposes, each and every word that gets you closer to your goal is valuable.

On a personal note, I got into memorizing prayers to reduce my mental suffering. After a few years of practice, I shared the story and the benefits I’ve experienced rather publicly at a TEDx event:

With all that in mind, if you’re looking for prayers to get started with, here are some popular suggestions from a few different traditions.

One: The Lord’s Prayer

The popularity of this prayer cannot be overstated. It is given at least twice in the Bible, and was taught to the disciplines directly by Jesus himself.

So when it comes to exactly how to memorize the Lord’s Prayer, you need to first settle on the exact version you want to hold in memory.

You may even want to consider memorizing it in Aramaic – it’s beautiful.

At just 109 words, this prayer should not take you long. It’s meant as a summary of what Christ believed.

Three: Prayers in the Psalms

I’ll never forget when Mike McKinley told me about how quickly he was memorizing the Psalms.

They’re packed with prayers that are useful in every day life for believers.

Wondering how to memorize prayers in Latin?

It’s actually the same process we’ll talk about below, regardless of the language.

But of the many traditional Latin prayers out there, Gloria Patri is a great starter project. It’s short and melodious.

Five: The Act of Contrition

Memorizing the Act of Contrition can be done in multiple versions, including Irish, Nigerian, Lutheran and more.

If you come across a version that has words you don’t recognize, don’t stress it. Here’s how to memorize vocabulary fast.

If you’re wondering how to memorize Muslim prayers, the same principle applies. Choose the one that suits your goals first.

There are many Islamic prayers you might choose from. Some are apparently even mandatory. They may also involve rakat, or movements you need to perform, which is why memorizing choreography is a great additional skill set to pick up.

Some prayers can really help you wake up to the precious life embedded in the world around you. Like this Navajo prayer:

I hope more people will commit prayers like Walking in Beauty to memory.

And keep in mind that you don’t have to stick with the Navajo. There are many tribal prayers to explore.

For example, can you spot how similar this Tlingit prayer is to the Lord’s Prayer?

In all cases, these prayers all serve as powerful concentration meditations, especially because they are in other languages.

Let me put my cards on the table here:

I’ve memorized a lot of Sanskrit for the purposes of secular meditation. For context, you can watch my TEDx Talk on why I got into the practice of memorizing these interesting prayers:

The meditation I talked about in that speech is an extract from the Ribhu Gita.

But the devotional meditation I love above all is called Atma Shatakam. I like it because it helps you focus on experiencing your consciousness without the traps of things that no particular belief system can actually know.

That’s not a judgment on any other prayers you might select. It’s just an observation based on a number of years working with memorized texts.

And there’s definitely still a wish embedded in every Sanskrit prayer I’ve committed to memory. It’s the wish to silence all thoughts and simply enjoy the ride of consciousness as it unfolds.

It’s probably the biggest “ask” you can make to the universe!

How to Memorize a Prayer in 5 Steps

Now we’re ready to start exploring exactly how to commit prayers to memory.

Don’t worry if some of these steps seem complicated. Just because you’re new at a skill, doesn’t mean you’re bad at it.

And most people can master what you’re about to learn in 2-3 days of practice.

All you have to do is set up your systems and you’re good to go.

Step One: Set Up Your Memory Palaces

When memorizing any verbatim text, it’s important to have a system for laying out the associations we’ll talk about in the next step. Without this system, you’ll wind up stuck in the traps of rote learning.

The system you want to learn is called the Memory Palace technique.

Let’s say that you want to memorize the Lord’s Prayer from the NIV version.

Rather than repeat the text over and over again, you’re going to lay out a set of associations that help you remember each and every word.

For example, you can use the pews in your church to lay out a few lines like this: 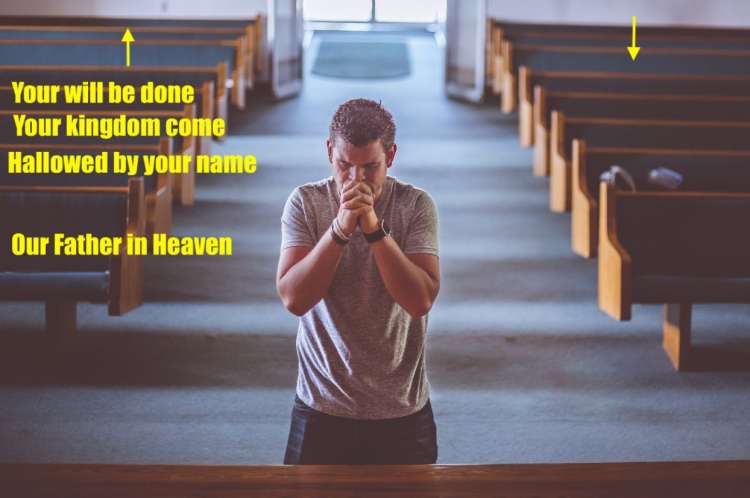 You can use each pew in your church as a “station” in your Memory Palace. Lay out the associations on a line-by-line basis for effective recall.

But it’s not the words we’re going to lay out. Rather, it will be associations that instantly make us think about those words.

Step Two: Use the Art of Association

The best way to create associations is to use the pegword method. At its highest possible level, you will have a PAO system which gives you a Person, Action and object for each letter of the alphabet.

For example, for “Our Father in heaven,” I look at the first word and see it starts with O.

Since Owen is my image for O, I instantly imagine him tickling a priest (a “father”) with an oar. 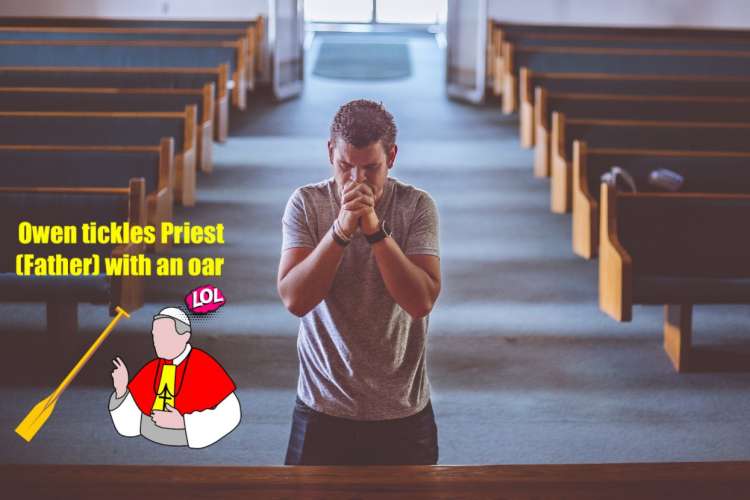 You might have different associations here, but this “Magnetic Image” is more than enough to help me recall the entire line. If you need an association for “heaven,” you just have to look at your pegword list and work from there.

Let’s take another example using “hallowed be your name.”

This time, we’ve moved one station back in our example Memory Palace. That’s because we’re assigning one line to each pew. This separation will come in handy later for installing the prayer into long term Memory. 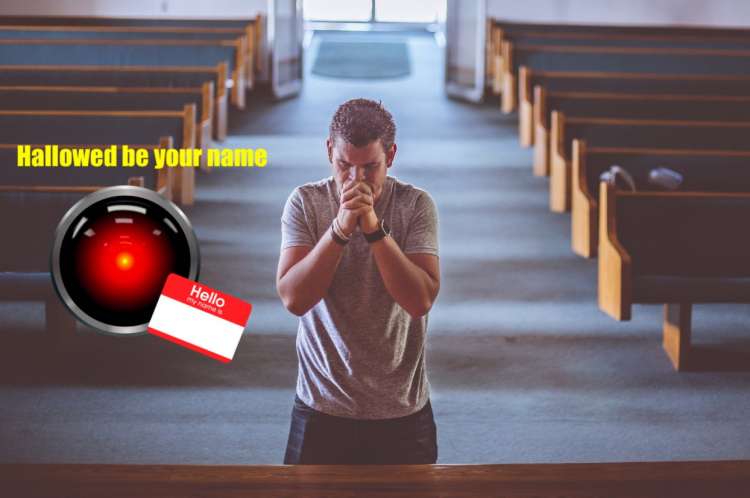 Notice the sound-correspondences and conceptual association in this mnemonic example. They’re fade away once your prayer is memorized, so it doesn’t matter that they are silly.

To remember “Hallowed be your name,” I chose Hal-9000 with a name tag. This simple association rapidly brings the full line back to memory.

Again, if you feel like you need an association for each word, that’s not a problem. Just make sure you complete the exercises in the Magnetic Memory Method Masterclass. That way, you’ll always have multiple associations for each letter of the alphabet to choose from.

Assigning associations is like priming a canvas and sketching some basic shapes.

To help make every word of the prayers you’re memorizing jump out at you, it’s important to add what memory scientists call elaborative encoding.

To do this, you want to think about the multi-sensory possibilities. When thinking about Owen tickling a Father Priest with an oar, for example, I also ran through these dimensions:

Hang on! That sounds like a TON of work!

In the beginning, it might feel that way. But with a small amount of practice, you’ll be able to run through all of these levels of association within seconds.

And remember to compare everything with the slowness and frustration of rote. Once you get this simple skill down, you’ll often be able to follow these steps just once and recall the prayers for a very long time.

Another thing people worry about is having all this silly “psychological laundry” in their minds while praying.

Don’t worry about that. The associations quickly fade, leaving only the prayer itself behind.

We know from memory science that we need the serial positioning effect to give each piece of information equal doses of primacy and recency.

To do this with a prayer, we revisit the Memory Palace in a particular set of patterns:

These patterns can be hard to understand, so to make them clear to you, please sign up for this:

Once you’ve followed all the steps above, you’ll have gotten a great amount of recall practice and be able to remember the prayers you’ve committed to memory.

However, don’t stop at recalling them mentally. For the best possible results, also recall them:

You can also consider drawing scenes of certain ideas or concepts that come to mind.

By taking these extra steps, you’ll be giving your brain a greater workout and creating more robust abilities with recall.

Now that you know about the Memory Palace technique, using associations and principles like Layered Recall, you’re ready for the final step.

That’s actually showing up to pray.

For this step, I suggest having a regular time and place.

I’ve been doing this for years and the benefits have been incredible.

I also suggest that you journal any thoughts or emotions you experience while reciting prayers from memory. Many interesting experiences have arisen from me and they are well worth reflecting upon.

So what do you say? Are you feeling empowered to remember any number of prayers?

Enjoy the journey and let me know which ones you choose to instill into your memory!