Harry Lorayne Memory Improvement And The Magic Of Mnemonics 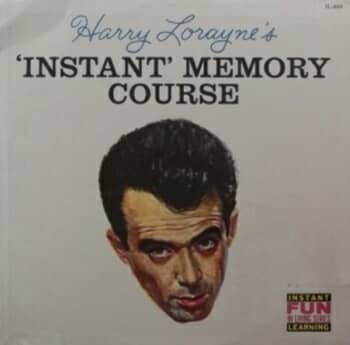 Could Harry Lorayne Be The GODFATHER Of Memory Techniques For The 20th & 21st Century?

(Seriously. The dude has memory courses on vinyl.)

Although memory training has been around for millennia, it has seen a huge resurgence in modern times. There are now countless books and materials about memory improvement, not to mention video courses, audio programs and, yes, resources like the Magnetic Memory Method Podcast.

But if there is one name who stands behind the explosion of mnemonics in the 20th and 21st century, that name is Harry Lorayne.

Through his voluminous work as an author and presenter, Lorayne spawned and popularized the modern industry of memory training.

Correct me if I’m wrong, but in terms of sheer visibility and quality, I think it’s safe to say that Harry Lorayne is the Mnemonic Godfather of modern memory training.

How Lorayne Survived A Terrible Childhood And Create A Memorable Career

The future didn’t always look so promising for Lorayne. Judging from his childhood conditions during the depression-era, it seemed that the odds were firmly stacked against him.

“I had an awful childhood. I’m a depression kid.” Lorayne shares in his 2012 interview with Michael Senoff. “I remember having a potato for dinner.”

He was also affected with dyslexia, which he only identified as such years later. This learning disability caused him to struggle and fail while in grade school.

But Harry Lorayne’s life took a different course when he discovered books on memory improvement.

As he told me in the exclusive interview he gave for Masterclass members, he discovered memory techniques in a dramatic way.  After learning these memory methods and drastically improving his grades, he started teaching his classmates on how they too could become memory masters.

From there, Harry Lorayne progressively became more and more successful. Lorayne has managed to emerge as one of the most famous and published magicians and memory experts of the century. Now in his late 80s, Lorayne is still at work teaching the world about memory, success and perseverance.

Harry Lorayne was born of Jewish parents in 1926 in Manhattan’s Lower East Side, right near the East River.

Having come to the world only 3 short years before the Great Depression, Lorayne’s childhood was spent in impoverished and difficult circumstances. Most everyone was poor, and Lorayne was amongst the poorest of the poor.

Poverty colored all aspects of Harry Lorayne’s childhood, including his play. He recalls how with his childhood friends he would play in a garbage dump near where he lived. Lorayne recounts:

“The garbage became a petrified hill. They were long, petrified mountains of garbage, and that was our playgrounds. That’s what my friends and I played on when I was a little boy.”

School also proved to be difficult Lorayne. Due to his undiagnosed dyslexia, Lorayne received failing grades as a young boy. To make matters worse, his father had a heavy-handed way of dealing with his son’s school performance.

Pushed to find a solution, a stroke of insight struck Lorayne one day on his walk to school.

“I just realized that at that point in my life, all you had to do was remember the darn answers to the questions, and then you’ll get a passing grade. And then, more importantly, your father won’t punch you.”

In other words, Lorayne understood that school was more about a test of how well you could memorize than a test of ‘intelligence’. As he says repeatedly in many of his interviews “There is no learning without memory.”

Lorayne soon headed to the library where he asked the librarian to show him where the books on “how to memorize” were kept.

There, he immersed himself for hours in how-to books on memorization. These included books from the 17th and 18th century, and works from modern memory trainers, such as David Roth.

Much of the material was not comprehensible for him at his young age. However, he understood enough to teach himself how to memorize things quickly and effectively using mnemonics techniques.

From that point on, he aced his tests at school, surprising his teachers and sparing him from his aggressive father.

His classmates took notice, and started to ask Lorayne how he managed to have improved his memorization so drastically. That marked the start of his career teaching others on how to memorize effectively.

Later, Lorayne would even have other people teaching his techniques for him. For example, the magician Darwin Ortiz talks about teaching for Lorayne in his Penguin Magic Live Lecture.

But long before being a teacher and helping others become teachers of memory techniques, Lorayne became a dropout during his first year of high school.

To make an income, Lorayne started performing memory tricks for small to medium sized audiences. He would impress crowds by memorizing magazine pages, decks of cards or large lists of names.

His original intention in doing these shows was to attract students to hire him for memory training. He found little success in doing so, but his shows led him to be noticed by an agent.

The agent started Lorayne on a path of presenting to larger and larger audiences. By 1958, Lorayne was presenting on national television, including shows such as The Ed Sullivan Show, The Merv Griffin Show and Good Morning America. Lorayne performed on the The Tonight Show Starring Johnny Carson no less than 24 times.

One of his most famous memory feats include memorizing each of the names of crowds of up to 1500 people. As much as 20 minutes later, he would be able to name each of the audience’s names when prompted. He is also known for having memorized an entire phone book.

But Lorayne didn’t make his name off of entertaining others with memory tricks alone. Instead, he became famous by teaching others how to use these techniques and improve their own memories.

This Memory Improvement Solution Could End
Your Memory Troubles Forever

Harry Lorayne has sold millions of copies of his many books teach people around the world on how to replicate his memorization ability. Many actors and other public figures have publicly acknowledged using Lorayne’s methods. These include New York city mayor Michael Bloomberg, Secretary of State Colin Powell and actor Alan Alda.

Harry Lorayne’s method is based on image associations. This is where the memorizer associates an image with the piece of information that they’d like to remember.

Lorayne’s methods are based on the idea that all memory can be broken down into associations of two entities. As Lorayne puts it:

“That’s what I teach, how to make one thing remind you of another.”

This is similar to how fellow memory expert Nelson Dellis explains it, but with a multi-sensory twist. These are the same association techniques Magnetic Memory Method student Marno Hermann used to memorize 1200 digits of Pi.

Lorayne’s method also extends the technique to non-physical and non-visual concepts, such as numbers. His teachings guide students on how to visualize numbers physically so as to remember them.

He does this by teaching students to associate numbers 1 through 9 with specific letters (a technique known widely as either the Major Method or Major System).

With this technique, any number can be connected with at least one word. By associating numbers with a physical word, numbers are given a physical quality. As compared to the abstract concepts that are numbers, physical qualities can more easily be used as mnemonics.

Lorayne also underlines the importance of paying attention. His method includes teachings on how to concentrate and focus on the information students are trying to memorize. “We are all born with the same capacity for memory,” he says. “It’s a question of having a trained memory, or an untrained memory”

One thing that many note about Lorayne’s work, however, is that his teaching seems not to cover the Memory Palace Method technique.

No one is quite sure why, but my feeling is that in some integral manner, memorizing the names of each person in a large crowd must use location in one way or another.

Unless the individuals change location, a mnemonist performing a feat like this most certainly taps into the power of a repeated location, if only unconsciously. There is a link between the where the information was memorized and where the mnemonist goes to recall it.

What Will Harry Lorayne’s Contribution To Helping You Create Instant Memories Will Bring To Your Future?

The answer is: Success.

In addition to his immense contribution to memorization training, Harry Lorayne has made significant contributions to the field of magic.

For example, he’s written over 30 books on card tricks. As a world recognized magician, Lorayne has invented and refined techniques which are now widely used by current-day amateur and professional magicians.

Lorayne’s life and career shows us how even barriers which many would consider insurmountable can be overcome.

His landmark contributions to memory training is an essential tome in the library of memorization techniques. At 89, Harry Lorayne continues to work and give seminars to large corporate audiences. He has even recently completed an autobiography.

Harry Lorayne, living legend of memory mastery, proving what Winston Churchill said: “Success is not final, failure is not fatal: it is the courage to continue that counts”

Is there Anything Missing From Lorayne’s Memory Training?

Yes, as a matter of fact.

Much to the puzzlement of many memory training students, Lorayne does not like the Memory Palace technique.

But that’s where I come in:

Super Memory – Super Student: How To Raise Your Grades In 30 Days

Idriz Zogaj On the Truth About Memory Training Apps