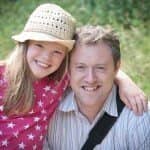 It’s okay. You can admit it.

Your years in the traditional educational system were painful and boring, weren’t they?

But even though you may have hated wasting all those hours away, I’ll bet you also wished that you had learned more. It’s a terrible irony, and yet you’re not to blame.

And neither is your memory.

Although there will always be problems with state education, just imagine what it would be like if learning could always be fun and interesting and that young people could remember everything they learn. Wouldn’t that be cool?

In this episode of the Magnetic Memory Method Podcast, Imogen Aires and her father Kevin talk about the powerful role memory techniques have played in her life as a young student.

Even in a short period of time, Imogen has used a Memory Palace based on her school and another based on the home of a relative to memorize the names of royalty and the titles of Shakespeare’s plays.

But the amazement doesn’t end with memory pyrotechnics. Kevin tells us about his surprise when he found that these memory stunts had an unexpected side effect: Getting Imogen – and the rest of the family – interested in the history of kings and queens.

Even better, soon Imogen was reading abridged editions of Shakespeare’s plays. Kevin talks more about this in his recent TEDTalk:

Tune into this episode of the Magnetic Memory Method Podcast and you’ll also hear about:

* One of the best books for helping kids learn memory techniques (and adults too).

* Why kids are perfectly capable of using memory techniques … and how this can lead to incredible “fluency” in Shakespeare’s plays.

* How you can help your kids build and use a Memory Palace.

* Why Imogen thinks that memorizing a deck of cards is going to be fun, even if they aren’t a huge priority for success in other areas.

* Why Imogen finds that exercising her memory is anything but boring. Kind of like how Kevin Richardson turned his memory into the perfect Learn Japanese App.

* Exactly why the mnemonic images you create need to be funny and weird so that they “stick” in your brain.

* The kinds of information that kids find the most interesting to memorize and why.

* How using memory techniques can serve as a “gateway drug” for developing interest in education.

* Why kids have more than enough locations in mind in order to build many Memory Palaces, including schools they no longer attend.

* The one thing that everyone has that makes creating your first Memory Palace incredibly easy and fun.

* How you can practice what you’ve memorized simply by talking with other people by teaching them these incredible techniques.

* How Imogen’s father turned what he thought would be a simple party trick into a moving TEDTalk about teaching memory techniques to young people.

* Kevin’s “edge-ucation” concept and how to apply it to your exploration of memory techniques and any subject of interest.

* Why mnemonic associative-images are like theatre plays and how that “restaging” them is the best path to getting the most out of your Memory Palace (and Memory Palaces if you’re using more than one).

* Why you’re never too young and it’s never too soon to become a “memory consultant.”

Brad Zupp on Memory Techniques And Memory Improvement For All Ages

Remember, Remember: Learn the Stuff You Never Thought You Could by Ed Cooke

The Memory Palace by Lewis Smile