Ambidextrousness And Memory: Can Dual Handedness Boost Your Brain? 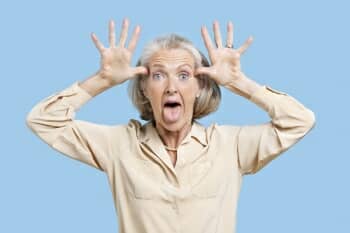 Can you write legibly with both your left and right hands?

Midway through a gig, can you swing the guitar to your left arm and continue strumming the ballad?

If you can, you are part of that 1% of the population who do not have a dominant hand and experience ambidextrousness.

And as you’re about to discover, ambidextrousness truly is an experience!

If you are ambidextrous, you’re in good company too. Or at least, interesting company.

Other members of this ‘exclusive’ group include Benjamin Franklin,  Kobe Bryant, and even Nikola Tesla, just one of many reasons I featured him on the cover of The Memory Connection: 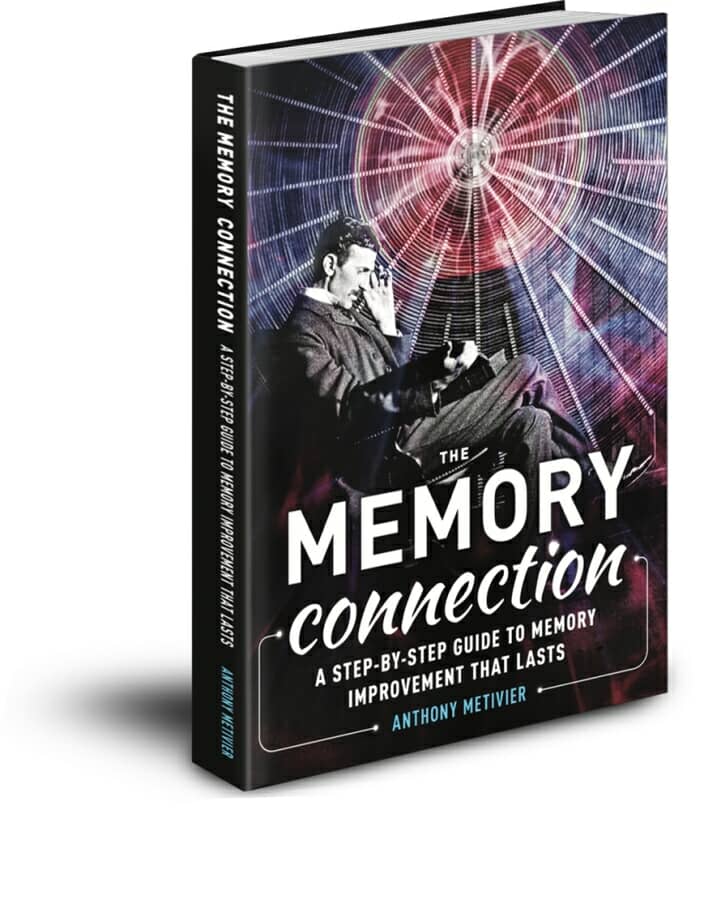 Many people believe training oneself to use both your hands equally unleashes hidden creativity and even improves memory.

The idea that becoming ambidextrous boosts brain function has existed for over a century.

Moreover, it is also claimed that if you harness this ‘power’ you can improve your academic performance, decision making skills and grasp difficult concepts quickly.

Can ‘learning’ to become ambidextrous really have all these advantages?

There is a bit of confusion regarding the actual definition of ambidextrousness.

You are ambidextrous, if  you can perform any task equally with either hand, for instance, write legibly using either of your hands.

However, if you do some tasks with your right hand and others with your left, experts will term it as being mixed-handed.

Jimi Hendrix is a good example of mixed-handedness. He used his left hand to throw and comb his hair, but he wrote, ate and held the telephone with his right hand.

How To Become Ambidextrous?
(Because Few Are Born This Way)

In the 1800s Paul Broca and Carl Wernicke discovered that different hemispheres of the brain handled different functions such as speech, language and even motor functions.

But it was only in 2009 that scientists researched around 25,000 families and found certain genes were responsible for ambidextrousness in people.

Then in 2015, researchers found that brain function within the cerebellum is responsible for creativity.

This certainly proves why many ambidextrous people have unconventional problem solving abilities.

If you want to develop these skills, multi-sensory neurobics exercises are your best bet. This is because they amp up your ability to use both hands. For example, you can learn to write backwards with your dominant hand first and then do so with your non-dominant before switching from left to right.

Yes, it’s a mind bending brain exercise. But that’s precisely the point. Without stretching yourself, you cannot experience growth. Part of what it takes to become a creative genius is willfully exposing yourself to challenges.

Creative Geniuses, Or:
The Celebrities Of Ambidextrousness

Nearly 60 years after his death, neurosurgeons studying Einstein’s brain discovered that his brain hemispheres were extremely well-connected. The ability to use the right hemispheres creativity and the left hemispheres logic gave the Father of Relativity a significant advantage from his peers.

Another historical figure who belonged to the ambidextrous club was Leonardo Da Vinci. The famous artist (and scientist of art) could easily write with both hands.

When Da Vinci wrote an ordinary letter, he used his right hand.

However, he wrote his secret diaries in mirror writing using his left hand which made it difficult for others to read. I’ll bet he used some of these visualization exercises too.

Are All Ambidextrous Individuals Creative Geniuses?

Left-handed tennis player Evgenia Kulikovskaya can switch her racket hand mid game to keep hitting forehands when her left hand gets tired. She doesn’t have a backhand!

Take a look at this video:

Though many modern studies link ambidextrousness with increased brain function in both hemispheres of the brain, this idea was not well received at first.

He also expected a lot from his disciples. Whether it was playing the piano with one hand or writing a letter with the other, he required his disciples to execute them flawlessly.

Was he successful in his mission?

His society was a laughing stock of the scientific community at the time.

John Jackson’s movement died out in the 1920s.

However, his ideas did not. They continued to fuel misconceptions regarding the power of ambidextrousness.

Can Being Ambidextrous Make You More Creative?
A Few Myths Busted

Jackson’s theories were not random ideas. They were derived from Paul Broca’s studies of brain lateralization that states that some cognitive brain activity is dominant in one hemisphere, and that each hemisphere was linked to the opposite hand.

No wonder people believed that using your less dominant hand would help activate both hemispheres of the brain leading to higher mental abilities. 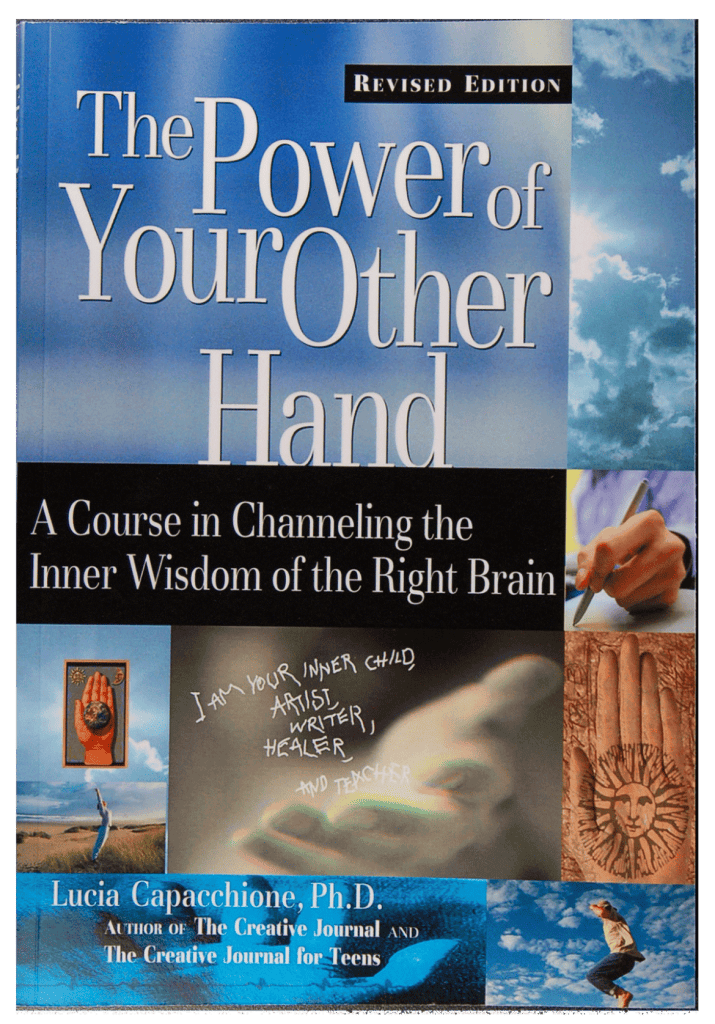 In her book, The Power of Your Other Hand, Lucia Capacchione claims that writing and drawing with the non-dominant hand gives greater access to the right hemispheric functions like feeling, intuition, creativity and even spiritual wisdom.

These claims are based on the fact that the function of the right hemisphere is responsible for creativity.

Is there any truth to these claims?

“Although there are recurrent claims of increased creativity in left-handers, there is very little to support the idea in the scientific literature.”

This from renowned psychologist Chris McManus in his book Right Hand, Left Hand – The Origins of Asymmetry in Brains, Bodies, Atoms and Cultures.

While there is no hard data to prove that training your non-dominant hand can improve your mental prowess, there is now evidence to state that if you are born ambidextrous, you may have some mental health issues.

After 8 years of research, German psychologist, JB Sattler discovered that children who switched from their dominant left hand to a non-dominant right or the reverse did not see “a change in cerebral dominance but rather a multifaceted cerebral disturbance or damage”.

The psychologist noted that ambidextrous children even had decreased memory for all three areas of information processing – encoding, store and recall.

Sattler said: “Ambidexterity is therefore neither a goal to aspire to nor is it a gift from God. Instead, it is first and foremost the mark of brain damage.”

It May Sound Crazy, But It’s True!

A study published in the 1998 edition of Neuropsychologia confirms Dr. Sattler’s research.

In this study around 12,770 children were tested for their verbal, non-verbal, and mathematical ability and reading comprehension skills. They found that ambidextrous children had lower test scores as compared to those who were left-handed or right-handed.

Ambidextrousness may also have a lasting effect on adults as well.

Ambidextrousness May Actually Harm Your Brain

For right-handed or left handed people most of their brain activity is localized in the opposite part of the brain. So your brain can easily access information through the majority of one hemisphere.

For ambidextrous people information has to flow back and forth between both hemispheres of the brain through the Corpus Callosum.

This can be a big problem.

This rapid transfer may lead to mental dysfunction in some cases.

Are There Any Possible Benefits to Ambidextrous Training?

Yes, though they are not as dramatic as advertised.

Mr. Corballis writes that it’s possible to train your non dominant hand for artistic purposes – like playing the piano for example.

Other than that, there are no studies to prove that becoming ambidextrous can improve brain function.

But what about improved memory?

Ambidextrousness and Memory: A Genetic Connection

Ambidextrous tendencies has been associated with improved memory. 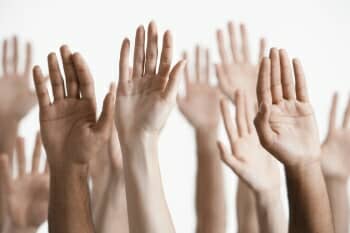 But here’s the catch:

To reap even the slightest memory benefits of ambidextrousness, you would be need to have at least an ambidextrous parent or sibling.

A 2001 study shows that families with one-left handed member may have better episodic memory rather than semantic memory.

Which means they have a better time recalling the context of the story rather than the facts present in the story.

There is one guaranteed method to improve both your episodic and semantic memory as well as autobiographical memory, spatial memory and procedural memory.

This method won’t be painful and labour intensive as using your non dominant hand. (Of course, you can use both hands to draw them for the extra boost if you wish!)

Okay here it is: 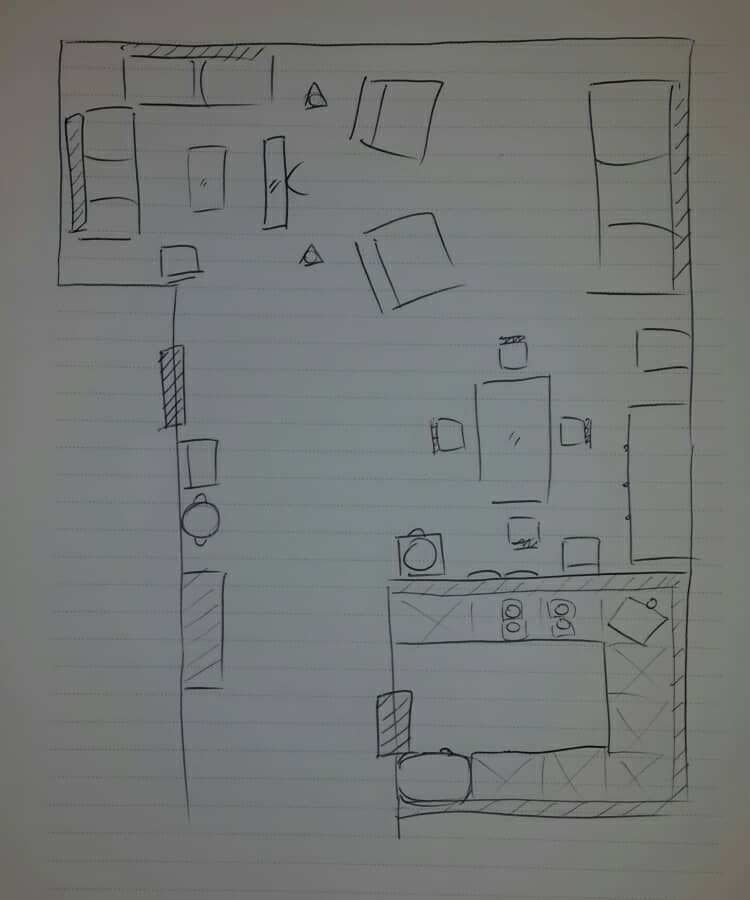 Memory Palaces have the unique characteristic that all other memory techniques can be used inside of them (not the other way around).

So if you need to store a massive amount of information, Memory Palaces engage both hemispheres of the brain.

How do they do this?

Memory Palaces require a great deal of creative visualization, therefore it helps to activate your right hemisphere associated with creativity.

You need more than one Memory Palace and as many as possible. That way you can revisit the technique to recall tons of information.

If you want to know more – here’s some vital information about Memory Palace Science.

A Direct method To Improve Your Memory

Learning to use your non-dominant hand to improve your memory can be a bit wasteful. You would have to spend days and weeks practicing to write with your other hand instead of focusing on what you need to learn.

While this may be fun, it’s not useful.

Memory improvement training should always be linked to memorizing information that will immediately improve your life.

Using the Magnetic Memory Method is great because, once you’re rolling, good memory abilities get you more time.

Ambidextrousness might be fun to develop if you take caution.

But, as we’ve seen, developing your memory is far more valuable!

So, what are you waiting for?

Please make sure you’ve claimed my free Memory Improvement Kit and use it to start experiencing better memory now.

20 Responses to " Ambidextrousness And Memory: Can Dual Handedness Boost Your Brain? "