Coconut Oil and Memory: Can It Boost Your Brain? [Advanced Study] 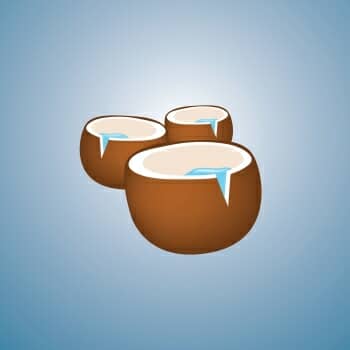 Is coconut oil good for memory?

Well, many people think that a diet rich in coconut oil is essential to prevent brain fog, memory loss, dementia and even Alzheimer’s disease.

For years, coconut oil has been been a staple in ketogenic diets for its high fat levels and low carbohydrate content.

Interestingly, a 2016 study by Klaus W.Lange and his team revealed that “both the direct administration of ketone bodies and the use of high-fat, low-carbohydrate ketogenic diets have been shown to be efficacious in animal models of AD (Alzheimer’s disease) and clinical trials with AD patients.”

But there’s a catch…

The study stated that “the mechanism underlying the efficacy of ketogenic diets remains unclear, but some evidence points to the normalization of aberrant energy metabolism. At present there is only limited evidence of the usefulness of ketogenic diets in AD.”

Don’t get deterred through…

There are other foods that improve memory well worth checking out too.

And yes, I like to cook with it myself, such as when making my Memory Friendly Chocolate Pancakes With Cacao Powder:

But despite being a wonderful ingredient in memory recipes like ours at the Magnetic Memory Method Headquarters in Brisbane, one question remains…

How vital is coconut oil in boosting your brain?

Let’s find out. Starting with:

Settlers in tropical countries used all parts of the coconut tree.

The leaves were weaved into baskets and mats, the sap of the flowers used to create syrups and the meat of the coconut served as food. Gradually, the settlers pressed coconut meat to produce coconut oil.

For at least 2000 years, coconut oil has been an integral part of Ayurvedic medicine. It has been used to heal wounds, treat hair fall, as a skin moisturiser and sunscreen, taken as a health tonic and even considered beneficial for the heart.

You could say coconut oil was the ‘swiss army knife of medicine’.

But there’s the kicker…

Despite its rich history, coconut oil is not used as extensively as it used to be.

In the 1950s physiologist Ancel Keys discovered that hydrogenated oils had saturated fat which was responsible for heart disease.

Remember, hydrogenated coconut vegetable oil was used extensively for cooking at that time.

In response, the vegetable oil industry blamed saturated fats in processed coconut oil and gave it a bad name.

The tactic worked and throughout the 1950s and 60s coconut oil was replaced by polyunsaturated vegetable oils.

Half a century after Dr. Keys discovery, scientists found that Medium Chain Triglycerides (MCT) which are present in coconut oil can improve memory for Alzheimer patients.

That again changed public perception of this humble oil.

In a 2004 study, elderly subjects were fed either MCT oil or a placebo at random. Subjects who had symptoms of Alzheimer’s showed an immediate improvement on the paragraph recall memory test after consuming the MCT solution. 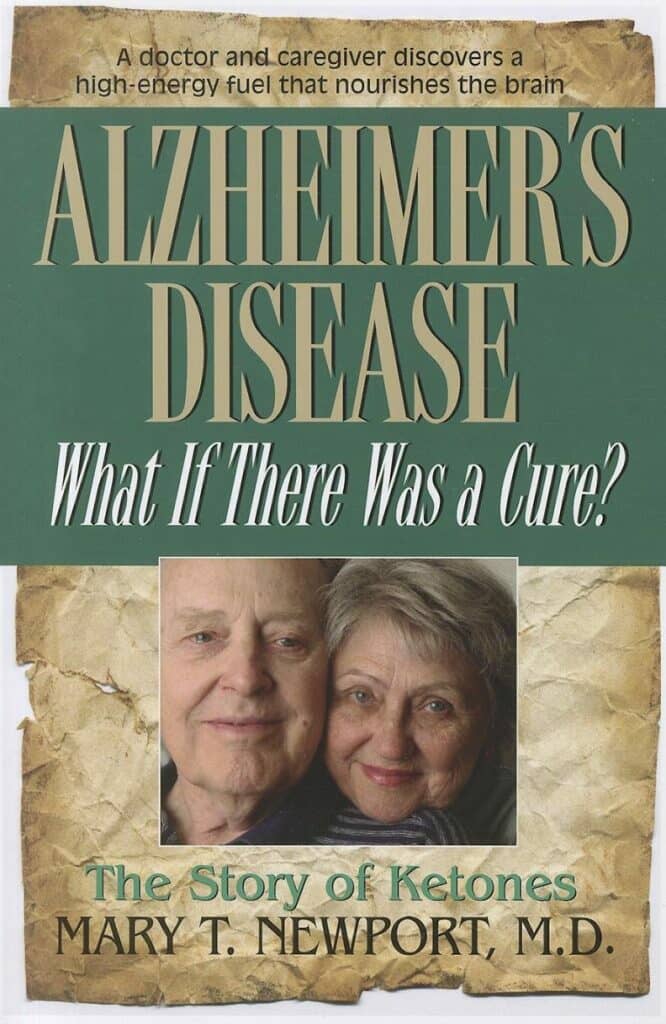 Then in 2008, Dr. Mary Newport – who was researching possible treatments for her husband diagnosed with Alzheimer’s disease – came across the patent application for Ketasyn (which contains MCT), which stated that the oil was derived from coconut oil or palm kernel oil.

Here’s where it gets interesting:

Dr. Newport fed her husband around 35 grams of coconut oil each day.

In her popular article “WHAT IF THERE WAS A CURE FOR ALZHEIMER’S DISEASE AND NO ONE KNEW?”, she described rapid change in her husband’s behavior two months after the treatment.

From the case study by Dr. Newport:

“He walks into the kitchen every morning alert and happy, talkative, making jokes. He is able to concentrate on things that he wants to do around the house and in the yard and stay on task, whereas before coconut oil he was easily distractible and rarely accomplished anything unless I supervised him directly.”

So the question is:

Before we answer that let’s understand the connection between coconut oil and ketones.

The Ketones Story: How to Power Your Brain

Our body uses glucose to power brain cells under normal circumstances. If there is no glucose available, our body burns fats to produce ketones which are then transported to the brain.

However in case of Alzheimer’s and dementia, your brain cells tend to resist glucose, and won’t function effectively.

PET scans have shown that areas of the brain which resist glucose, use ketones as an alternative source of energy.

Why does this matter?

The Popularity Of Coconut Oil:
Is It All Just A Marketing Gimmick?

It seems a lot of popularity of using coconut oil for memory loss is based on Dr Newport’s research.

On September 27, 2011, Dr. Mary Newport published Alzheimer’s Disease: What If There Was A Cure?

The book detailed her husband’s struggle with Alzheimer’s and how regularly consuming coconut oil drastically improved her his condition.

Notice the spike in coconut oil searches on March 2012, a few months after the release. 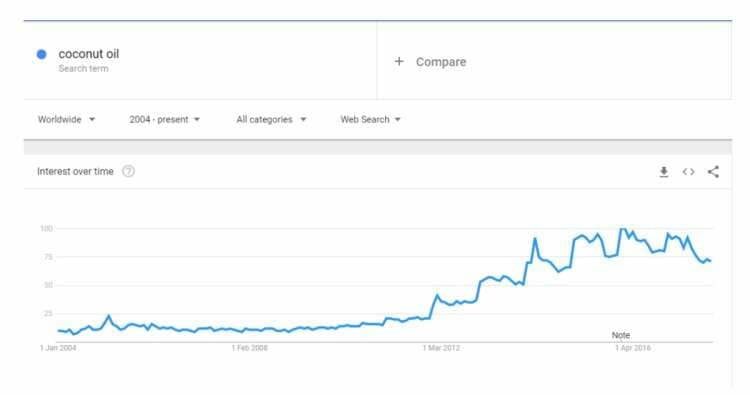 It’s quite possible that her positive experiences with coconut oil treatment was a ray of hope for families with Alzheimer patients.

In their bleak situation, it’s understandable that families would try anything for the wellbeing of their loved ones.

Just How Bleak Is Alzheimer’s Really?

Alzheimer’s is the most common cause of dementia and one of the earliest and most distinctive aspects of Alzheimer’s is its effect on memory.

There’s no cure for Alzheimer’s.

We do have these 3 Things To Remember About Alzheimer’s, however.

Plus, there are a few treatments and medications to help manage the disease.

The costs of these treatments can be an additional burden on families. On the other hand, being so inexpensive, coconut oil treatment seems like an attractive option.

And under such circumstances, it is understandable that families wanting a miracle cure will grasp anything that even remotely suggests a cure.

No wonder, Dr. Newport’s studies were treated as the gospel truth. Soon after, hundreds of families reported that coconut oil improved their family member’s symptoms.

Their claims were not as dramatic as Steve Newport’s progress, but any development was hailed as positive. Especially improvements to episodic memory because we use this to share the stories of our lives.

This is a common psychological phenomenon…

We tend to see or believe what we want to see.

The Newport’s story was so remarkable that it was even featured on CBN.

Soon after this report appeared, the coconut oil fad reached its peak.

Is Coconut Oil A Superfood?

Coconut oil is marketed as a superfood. A few health bloggers claim that coconut oil can improve mental performance, support the immune system and improve digestion.

Will popping an oil pill make you smarter, boost your memory and keep that brain fog away?

The truth is harder to swallow..

Dr. Newport states that a person needs to take fourteen 1 g pills to receive the same effect as 1 tablespoon of coconut oil.

That is a lot of pills even for the most ardent pill popper!

Before we go further, take a quick peek at the truth about the best supplement for memory and concentration:

Should you take coconut oil to improve memory?

Dr. David Morgan, CEO of BYRD Alzheimer’s Institute states: “There is only anecdotal information that shows it can be beneficial, but there is not enough research on the matter.” 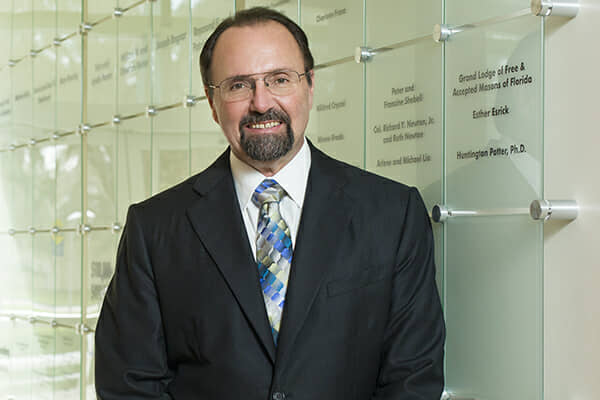 And I think he is right.

Although there are studies prove MCTs might benefit brain health such as improving brain cells and learning in older dogs and rats , there exists no clinical data that MCTs promote long-term brain health.

Another study shows that MCT supplements have shown to increase in memory and motor skills in a few Alzheimer patients.

But here comes the sad part…

The effects are only short term.

What Does MCT Have To Do With Improving Memory?

As it turns out, nothing much!

Under normal conditions, brain cells require glucose. Only after your body runs out of glucose, ketones supply energy to your brain cells. So an additional source of MCT in your diet just produces additional ketones which may not be even used by your brain. 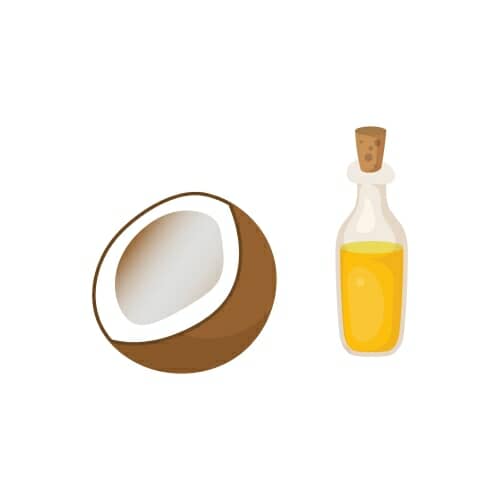 There are some embarrassing side effects to this treatment too.

You also need to be vary of the dark side of coconut oil.

According to a recent paper on Dietary Fatty Acids Directly Impact Central Nervous System Autoimmunity via the Small Intestine:

“Lauric acid (LA), which usually makes up 50% or more of coconut oil, tips the balance of T-cells (immune cells that actively participate in the immune response) towards the production of inflammation, and also, in mouse models, exacerbates multiple sclerosis (MS), in which your immune system attacks the protective sheath (myelin) that covers nerve fibers and causes communication problems between your brain and the rest of your body.”

A More Nourishing Way to Build Your Memory Cells

No known supplement or oils can help your memory.

There is an easier and far less complex way to help you improve your memory: build Memory Palaces, using the Magnetic Memory Method way.

Memory Palaces work even in the most broken brain. But they work REALLY well in healthy brains.

Memory training through daily exercise that keeps your mind active, in tune, and fully under your control is a great way to noticeably improve your brain. 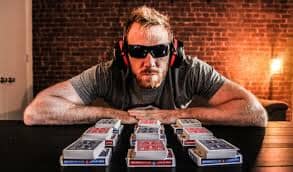 Just look at Nelson Dellis and Climb for Memory charity. Nelson is a firm believer that “exercising” the brain daily can keep the mind sharp and delay, or even prevent, Alzheimer’s disease.

The Memory Palace is the best memory technique because it allows you to develop and use spatial memory in a way.

Spatial memory, the basis of the Memory Palace technique, unlocks the power of multiple levels of memory, including:

So that you can move information into long term memory faster and with predictable and reliable permanence.

If you choose this memory training technique…

Build Your Memory With Vitamin M

This is by far the coolest and easiest way to boost your brain function and make it easy to learn and remember anything. Far better than duping yourself or letting yourself fall prey to other realms of hypnosis and memory improvement.

Vitamin supplements or coconut oils are not the best “nutrients” for gaining improvement in memory or recall. You could try using coconut oil for hair loss, though. I’ve been thinking of doing that myself.

In the meantime, here’s what is likely going to work best:

A balanced diet, meditation, sleep, and an effective, dedicated memory strategy (like the Magnetic Memory Method) are the real ingredients to enhance your memory, concentration and focus.

Bilingualism can also make for a healthier brain.

Ready to improve not just your memory, but your entire life?

17 Responses to " Coconut Oil and Memory: Can It Boost Your Brain? [Advanced Study] "