Memory Spaces: What They Are and Why They’re Important 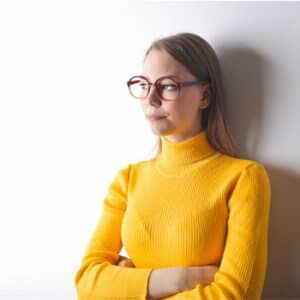 People who use memory techniques enjoy a diversity of terms.

“Memory Palace” is my favorite, but more and more I’m leaning towards adapting Lynne Kelly’s use of the term “memory spaces.”

I like it because that’s essentially what a Memory Palace is: a space for storing information.

Of course, we’re usually using an imaginary version of that space.

However, there are times when we can use these memory storage areas in much more direct ways.

On this page, I share some of my favorite approaches.

Why should you care?

Because when you’re able to rapidly learn and remember information using these techniques, your quality of life goes way up. You can:

And that’s just for starters.

What Are Memory Spaces?

A memory space is literally any location you use as a foundation, canvas or platform for encoding information with associations.

Let’s say you want to remember the name Luke. You can place Luke Skywalker on his shoulder.

His shoulder becomes a “memory space.”

In the method of loci, this specific spot would be called a “locus.”

Generally, though, I would just call this a station in a Memory Palace, particularly because I usually remember names at events. Luke would be just one of many I would memorize.

But these are all typical approaches. Let’s look at a few more.

Now, there’s a sneaky reason I used the name “Luke” in the example above. That’s because my first example of an alternative memory space was going to be the lukasa.

Also sometimes called a “memory board,” the word means “long hand” or “claw.”

Typically made of wood, they often come shaped in a way that might remind you of an hourglass. 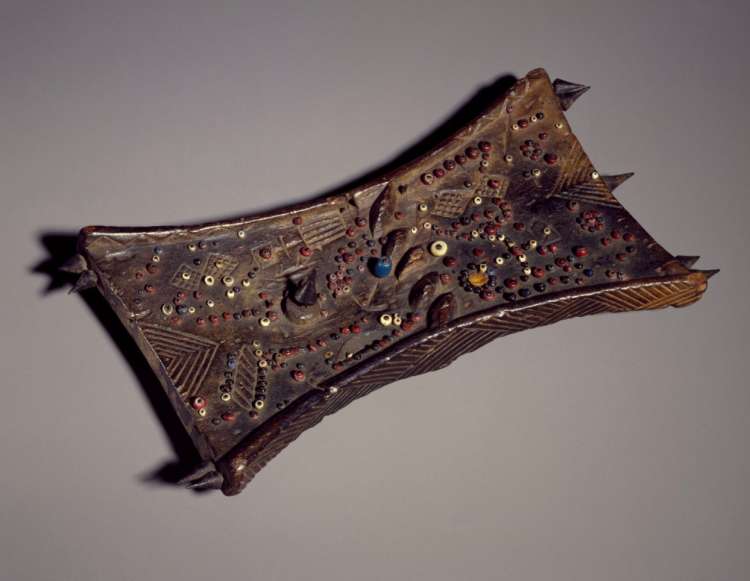 People would cover them in colored beads to help them remember histories, plant locations and names of medicines. Folk wisdom, military matters and other information would also be encoded.

These devices also helped people remember how their societies were organized and give them a common point of focus for discussing the law.

As far as I understand, they would run their fingers along the surfaces. Each bead would help them recall a story or piece of information.

The relationship to how encoding in a Memory Palace is clear. It involves all of the principles related to the linking and story method.

Related to the lukasa are many other items. You can learn about them from Aboriginal and indigineous memory expert Tyson Yunkaporta.

Can you imagine holding 75 hours of music in your mind?

Anna Berger suggests that people regularly memorized and retained this amount in her book, Medieval Music and the Art of Memory. She quotes Kenneth Levy who estimates that their knowledge “would correspond to the selection of Beethoven’s instrumental works plus the full Wagnerian canon.”

That’s a lot of information! 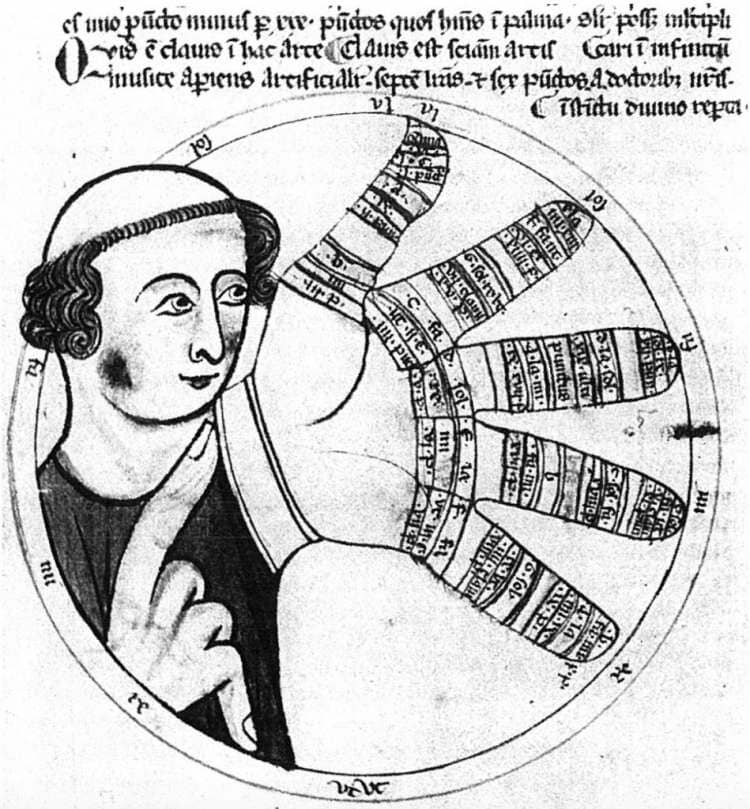 How did they do it?

Many scholars, including Berger, have shown that a lot of the memorization was done by the medieval monks using their hands.

Basically, they would turn their fingertips and the joints into memory spaces. Each spot would be marked with a name that corresponds to the musical staff they were using at the time. The approach gets its name from Guido of Arezzo.

In contemporary terms, you could use your hand to memorize the clef notes quite quickly. For example, if you take the notes of the bass clef that appear between the lines, you could align them like this on your pointer finger: 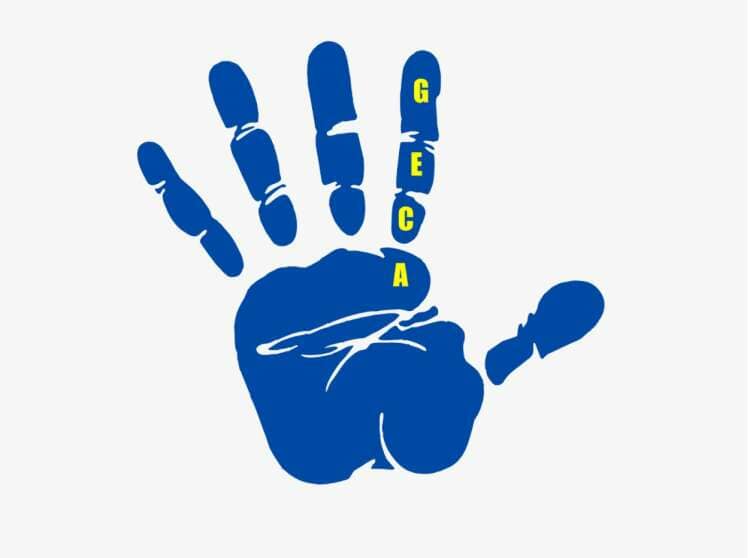 The hand doesn’t just have to be used for music, however. Tyson Yunkporta gives a great example of using your hand to remember knowledge in his book, Sand Talk.

I’ve also used my hands to remember and practice Sanskrit verses that I’ve memorized. The important thing is to figure out the grid you’re going to mentally layer onto your hand and then stick with that configuration. Otherwise, you risk confusing yourself.

I once read that Napoleon might have used the buttons on his shirt to help him remember simple things.

I don’t know if that’s true or not, but it totally makes sense. And when we think about military people, all of those medals, badges and other insignia are literally spaces we use to help us remember rank and other important information about people. 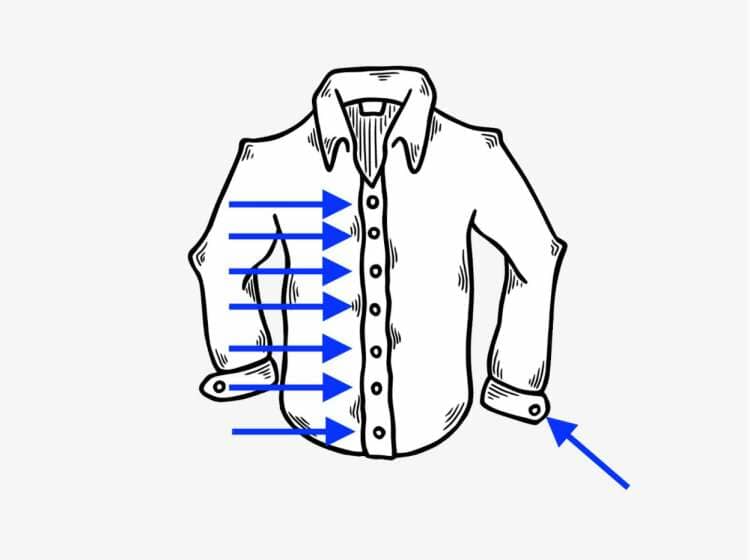 Then, when you want to remember something, link it with the buttons. If you already have a PAO System, you can use those images as a pre-loaded hook on a button-by-button basis.

In case it isn’t obvious to you, by using buttons like this, you’re essentially turning any relevant item in your wardrobe into a kind of lukasa!

Sure, they’re small. But that’s no reason why you can’t use the coins in your pocket in a pinch.

Before I started using shoulders as my memory spaces for names, I would meet one or two people and place their names on a coin. It was a reference that worked great.

All you do is divide the coin into two surfaces. Apply one name to the heads side and another to the tails. 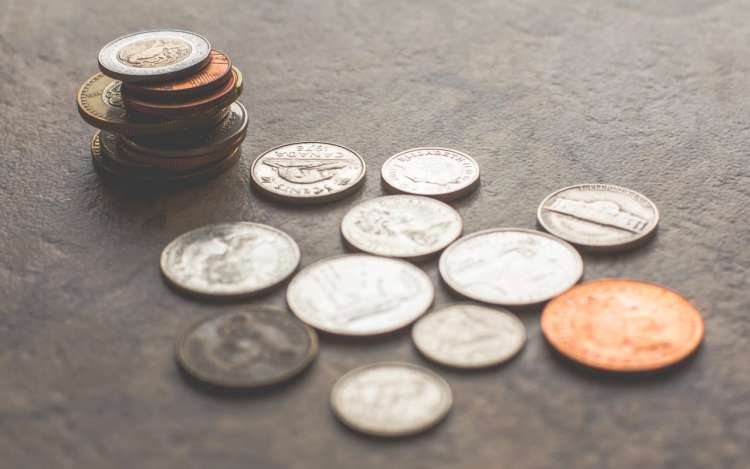 How to Use Sites of Memory to Remember More

I’ve mentioned the Memory Palace above, and I still believe it is the ultimate mnemonic device.

But when it comes to giving our memory spaces extra meaning, we can make some deliberate choices.

For example, if you’ve ever visited an old cathedral, even if you don’t practice any given faith, its atmosphere can give the things you choose to memorize using it an extra boost.

Or any personal option that has special meaning for you.

You can also transform places that don’t have positive memories into calm and soothing points of reference.

For example, I had a troubled youth. One home in particular used to be packed with disturbing memories.

One day, I decided I would stare this collection of bad memories in the face and encode it with positivity.

To do this, I started in the worst part of the home and started using it to memorize the Nirvana Shatakam.

A few days later, I had completely forgiven the past and now have an incredible meditation poem to reflect on, one that creates even more peace and love.

To get started with the Memory Palace technique yourself, give my FREE Memory Improvement Kit:

It will help ensure that you’re able to achieve any learning goal quickly and deepen your memory skills in meaningful ways that create lasting fulfillment.

The important takeaway is that anything physical occupies space – and that means we can use those objects to help us remember information. We can use people, tables, memory boards of our own creation or even the coins in our pockets.

The trick for many people is to commit to working out the order of the individual memory spaces they’re going to use on their objects or landscapes.

Then, you need to develop your association skills. Typically this is done by working out a highly personalized pegword method. This should only take an hour or so, perhaps a bit more over a few afternoons if your imagination has gotten rusty.

It’s well worth the effort, though. Once you have the foundational techniques in place, you can apply them to learning just about anything better.

Are you ready to start examining the objects in your life a bit differently?

The world is full of resources just waiting to help you experience rapid recall of the knowledge you need to succeed.