The Real Meaning Of Names And Your Memory: Why You Find It Hard To Remember Proper Names 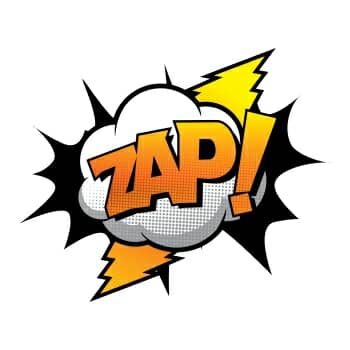 You’re an attentive person and you care about people.

But no matter what, the names you encounter completely slip your mind.

And it happens in a flash. In one ear and out the other. Zap!

It’s not just the names of people either.

We’re talking about the names of:

… and even adjectives derived from proper names.

Why is information like this so darned difficult to remember?

Well, you’re in luck. Although some of the reasons may shock you, today you’re going to learn everything you need to know about exactly why proper names of all kinds of thing challenge your memory.

And as we go along, we’ll solve the problem so that names become much easier for you to remember.

Why The Meaning Of Names Fuels The Fire In Your Brain

At the most basic level, some names are easier to remember simply because they mean something as opposed to meaning nothing.

For example, The Great Wall of China and the Berlin Wall are less challenging to remember than Ostkreuz and Shun Yi for most people because the names themselves come soaked in meaning.

But if you hit a name cold with no base line of familiarity … It slides out of your grip like sand.

Certain names also enter your memory at a younger age than others. Bugs Bunny, Marvin the Martian and Donald Duck all hold special favor in my memory because I’ve been encountering them for years.

But in the John Grisham novel I’m reading right now, I needed to deliberately go out of my way to remember the names of the characters. Names like Troy and Nate are so bland, there’s little for the mind to grab onto. Mnemonics to the rescue.

Speaking of guys named John, I was blown away by John Graham’s incredible skills with memorizing names. Listen to him talk about his skills and see if you can’t up your game based on his inspiration.

How Authors Trick Your Brain
Into Remembering Characters

Other novelists are good at making remember character names easy, however. I’m also reading Blank at the moment.

Author Matt Eaton uses names like Luckman. This naming strategy deliberately attaches meaning to the hero by reducing abstraction to a concrete signal that says this man has a relationship to luck. It tells your brain to look out for signs that confirm or disprove this, making the name instantly more memorable.

On the other hand, the meaning of names spikes in value when Maxine is subtly shifted to Max. This technique asks the reader to think about her name as an object and wonder if she abbreviates it because she’s fun and funky or to give her a masculine edge.

The truth is that names usually have no meaning. And in the real world, there is no author in the sky using literary tricks to help you remember names or find meaning in them.

But that doesn’t stop your brain from seeking the meaning of names when you encounter them.

For example, Jozef Nuttin has demonstrated your brain finds the alphabet letters in your name more attractive than others. Now called the Name-Letter Effect, Nuttin’s discovery sheds light on why some people do better in school, gravitate towards certain cities and remember some names better than others.

In the main study, Nuttin presented students ranging from elementary school to university with letter pairs. Some were given random letters. Other subjects were given lists that more closely matched the letters in their names.

In either case, when asked to select the letters they preferred, all subjects showed a preference for letters that were in their own names. Although memory studies don’t all agree, it is possible that the Name-Letter Effect also explains why we remember some names better than others.

And It Seems To Appear In Just About Any Language!

Note that this effect does not appear to be language-specific. It has been tested in Dutch, English, Finnish, French, German, Greek, Hungarian, Polish, Portuguese and Spanish. Other experimenters have tried it with other alphabets like cyrillic and done experiments to see if the effect persists into adulthood when people learn a foreign language that uses a different alphabet or character-set.

Also note that the Name Letter Effect might apply to numbers as well. Although I use the Major Method, I tend to find 2 and 7 easier than other numbers, and that advantage may reflect the fact that my birthday is overloaded with both of them.

Sound Has Its Own Sex And Success Appeal

There’s no doubt about it. Some names sound nicer than others.

And that appears to have a psychological effect. For example, if your name “sounds” like it belongs to a successful person, you may be motivated to fulfill the prophecy.

So one cool trick for remembering names a lot better you can explore is to always associate new information with successful people. This is why the Magnetic Memory Method teaches you to create lists of celebrities.

When you do this, you’re not just equipped with a “crib” of associations ready to go. You also have the success effect working in your favor.

How To Cut Through The Noise
And Remember Names Properly

In order to hear names better, you need to practice listening. You also need to monitor yourself for laziness and shyness.

For example, I have often made the fatal mistake of remembering names I didn’t hear correctly and then using memory techniques.

In combination with the Recency Effect, the Magnetic Memory Method is so powerful that the mistake can be impossible to shake. You wind up calling that person by the wrong name for the rest of the night.

There’s no shame in asking and it buys you time to overcome some of the other things that make remembering names difficult.

But the ultimate barrier we all face is the lack of inherent meaning in most names.

Why Your Brain Always Drops The Ball Like A Bad Juggler

When you meet a new person, you’re not just meeting a name. You have the room around you, a face and all kinds body language and unconscious communication.

Plus, names rarely tell you what a person does. Someone being named “Baker,” for example, does not mean that they work as a baker. And if someone says they are named “Glirkzifal Mershkevork” and work as an architect, your brain is going to seize upon what it understands and skip over the information it has never encountered before.

Plus, your brain needs to store the name in a different area than it does the information about the Glirkzifal being an architect. The filtering happens due to something called “plausible phonology.” Even though you likely have never heard the name Mershkevork, your brain accomodates the idea that such a name exists.

(On the other hand, if someone says that they’re a mershkeverker, your brain will do a backflip trying to figure out if such an occupation exists.)

Given the split-processes and the fact that most names have no meaning, you’re in trouble. Unless you’re using memory techniques, you’re bound to drop the ball on the harder to remember information.

Luckily, there are some features and conventions of names and naming that make the meaning of names irrelevant. Understanding these will make a huge difference for your success.

1. Names are both acoustic and physiological.

In almost all cases, you have the opportunity to experience names both in your ears and using the muscles of your mouth. You can also see many names represented in writing on paper.

By simply taking time to notice the different perceptions you go through when encountering names, you’ll improve how you remember them.

As a listener of the Magnetic Memory Method Podcast, you might immediately think that I’m talking about Jonathan Levi. (His SuperLearner Academy free trial is still running, if you’re interested.)

The reason his name would come to mind is because Jon is a logogen within a context you understand.

But I could have said “John” and meant “John Wayne.”

The point is that most names have some kind of logogen in them. To take our friend “Glirkzifal Mershkevork” again, “ifal” and “kevork” are deliberately implanted logogens for real names like Percival and Kevorkian.

No matter what names you encounter, and no matter how difficult they may seem, you can always look for the logogens within them to help you make memorable associations.

The meaning of names is often found in sound. For example, approximately half of words that begin with “gl” words are visual in nature: glance, glitter, gleam, glow, glower, glimpse.

Likewise, many “fl” words are associated with light, such as flash, flare and flicker.

In fact, a 1929 study by Edward Sapir showed that there is some relationship between vowels and the meaning of words related to size, speed, brightness, pleasantness and disgust.

For example, listen to how the vowel /u/ helps convey meaning in these words: dull, blunder, clumsy, mucky, muddled, bunged up and bungled.

Many authors have noted the relationship between meaning and sound in naming characters, particularly Charles Dickens and the marketing departments of many companies.

And, of course, any time you meet a person, you can use memory techniques to inject your own meaning into any sound. You just need to pay attention to how names sound in the first place.

And keep in mind that all phonetics can be represented visually. That means iconic memory plays a role in how you remember not only the sounds of names, but how they look when printed.

Never Be Satisfied With Your Memory

The takeaways from all this doom and gloom about your memory?

You have options, even if the meaning of names is never apparent to you.

One of the biggest option is to simply start paying more attention to language, both sound and physiology. Take time to expose yourself to interesting names and words. You might also want to think about physical movement, not only in your mouth, but your entire body.

Be disciplined about this practice and extend it to looking at visual representations of names. There are entire branches of art devoted to representing words. For example, check out the Visual Poetry section at Ubu. You’ll find amazing pieces like this by b.p. nichol: 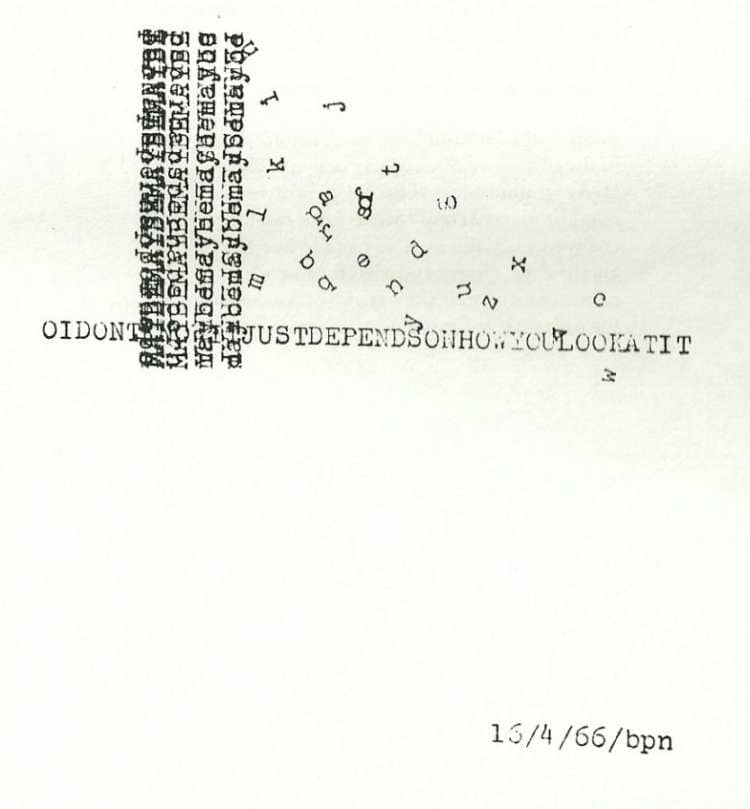 Even though we should never be satisfied with our memory, it’s important to understand that you never make errors with your memory. You only learn lessons about how it works and how to make it better.

But you need to take risks. And when you forget things, simply explain to people that you’re working on your memory. And tell them that’s it’s not just about your memory.

It’s about the health of your brain.

And that means it’s also about the quality of your life.

You do want a good life, don’t you?

8 Responses to " The Real Meaning Of Names And Your Memory: Why You Find It Hard To Remember Proper Names "