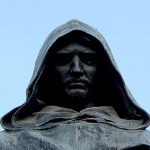 In this episode of the Magnetic Memory Method, Scott Gosnell, the translator of two books by the mnemonist Giordano Bruno talks about the man, his writings and the application of his memory techniques to everyday life.

Since recording this interview, a lot of people have asked if they should read Giordano Bruno.

My opinion aside, listen to Scott’s knowledge on this Magnetic Memory Method Podcast interview.

* How to use Star Wars (or any movie you’re familiar with) as a Memory Palace.

* Why Scott’s translations of Giordano Bruno are the product of perhaps the best form of procrastination you’ll ever hear about (and maybe even be inspired to do some similar procrastination of your own for the good of humanity).

* Scott’s amazing Memory Palace technique for students, possibly the most amazing technique you could add to your studies that I’ve ever heard!

* Bruno’s idea that an intelligible system exists behind the world and how this connects to memory.

* How to use memorized objects as Memory Palace locations.

* How studying Bruno’s systems could help you coordinate your knowledge while learning to retain it.

* Why Francis Yates’ interpretation of Bruno’s activities in The Art Of Memory and Giordano Bruno and the Hermetic Tradition may not be the best way to think about his memory improvement projects.

*  Why Bruno was really interested in the psychology and neuroscience of the human mind – not magic.

* Why Bruno thought his memory system could give you an internal representation of the entire universe … or did he?

* Why Bruno felt it was a practical concern to keep your Memory Palace well lit and not place your associative-imagery on a background of the same color.

* How context sensitive cues can either help or harm your memory.

* Why Bruno likens Memory Palaces to writing so that you can scan a Memory Palace for memorized information the way you would scan a page looking for a particular word.

* Why Bruno’s execution probably had nothing – or at least very little – to do with his mnemonic systems.

* Thoughts on Bruno as a “marketer” of memory techniques.

* Why memory techniques were a very useful talent for a king to have (and still are even if you’re not a king).

* Why Bruno most likely wasn’t a spy – but probably would have made a good one had he been.

* Why Bruno thought that the Memory Palace was the best and most effective memory method available, even though he also used smaller methods like linking, lists and poetry.

On the Infinite, the Universe and the Worlds by Giordano Bruno, Translation and Introduction by Scott Gosnell

Moonwalking with Einstein by Joshua Foer

Heresy by S. J. Parris (one of many in a series of books structured around Bruno)

Tony Buzan On The Paradise Of Multiple Intelligences

Please visit their store to order one of the limited editions of On the Shadows of the Ideas by Giordano Bruno.

Or if you’d just like to learn more about my initial impressions of the book, check out this replay of my recent YouTube Live Stream about On the Shadows of the Ideas by clicking play on this video: