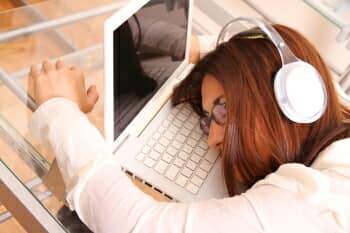 It’s a curious thing that human beings, and most other animal species, are driven to regular periods of inactivity and unconsciousness. What could be less evolutionarily beneficial than a stretch of eight hours during which you can’t hunt, defend yourself, or reproduce? Not to mention working on your memory improvement.

All jokes aside, the fact that we are driven to sleep is an indication that sleep has an important purpose in our biology.

And yet, the precise mechanisms of sleep remain largely mysterious. The exact reasons why we require sleep, and what happens during sleep, are areas of current research.

One thing is for certain: lack of sleep leads to an array of social, financial, and health-related costs. Indeed, the fatality rate of sleepiness-related car crashes is similar to that of driving under the influence (Goel et al 2009). What’s more is that prolonged sleep deprivation leads to death for many studied species (and presumably humans) (Cirelli et al. 2008).

Despite these realities, a full 20% of adults are not getting enough sleep (Goel et al 2009). It’s a common practice in our culture to praise those who can work the most and sleep the least.

However, research indicates that this attitude is misguided. Lack of sleep has important negative implications for cognition. Sleep deprivation puts pressure on your entire cognitive apparatus, and has the potential to affect your memory.

After this article, you may be convinced that a nap is in order.

What Exactly Is Sleep?

But what is sleep, really?

NREM sleep happens during the early moments of falling asleep. As the name suggests, there is little to no eye movement during NREM sleep. Dreams are rare during this stage, your body is not paralyzed as in REM sleep, and mental activity is still “thought-like” (Bryant et al 2004). This is the stage during which some people will sleep-walk.

The role of NREM sleep is to conserve energy, cool the body and brain, and promote immune function.

Following NREM sleep, a person will fall into REM sleep, where rapid eye movements can be observed. This is where the majority and the most vivid dreams occur. Your body is paralyzed, which is an adaptation to prevent you from acting out your dreams. You will periodically wake up – which some researchers feel serves as a way to survey the environment (Bryant et al 2004). These mini-awakenings are typically not remembered.

The Devastating Consequences Of Sleep Deprivation
On Memory Revealed

As you sleep, you will cycle between NREM and REM sleep four to five times during the night.

By understanding our sleep patterns, it becomes evident that there is much more that happens during sleep than simply being unconscious. The broad overview given here just scratches the surface of the complex world of sleep.

For all of its complexity, sleep serves essential functions. For example, a sleep-deprived person suffers from many ailments, including:

The compromised cognition experienced during sleep is all too familiar for many of us. We all know that after a poor night’s sleep, we are groggy and we tend to think more slowly.

When it comes to memory, the essential role that sleep plays is more pervasive than most realize.

Sleep Plays a Key Role When it Comes to Your Memory

There are three basic memory stages.

The first is called acquisition or encoding. This is the process of collecting the information or processes that you’d like to memorize. An example could be re-reading the dates and prominent figures in a history book. This is called “declarative” memory, and is the memory of facts and information. Another example of memory is procedural memory. This is memory of how to do something. This could be anything from learning how to ride a bike or learning how to play the piano.

The second step is consolidation, where the information you’ve absorbed become stable in your mind. It is at this stage that memories are formed in your mind.

Finally, you must be able to recall memories for them to be useful. Thus, the final stage in memory is remembering something during your waking hours.

Numerous studies have indicated the importance of sleep for the second stage, memory consolidation. A good night’s sleep can help you recall facts and information, as well as solidify skills that you’re trying to learn.

Under the current scientific understanding, sleep is absolutely essential to memory. We require sleep to file information collected during our waking moments, in our minds. In doing so, we are able to recall newly acquired information (Ellenbogen et al. 2006).

For example, learning the guitar requires that you memorize hand movements as well as notes. This is called procedural memory. Long term sleep has been specifically found to help with procedural memory formation (Diekelmann and Born, 2010).

Sleep Shifts Info Around In Your Brain

Scientists also believe that we “replay” our previously learned information and skills during our sleep. Experiments have been conducted on animals and humans after they have been trained on a particular task. During sleep, the same parts of the brain that were active during the training exercises, were active while sleeping as well. This is because the brain will repeat the actions during your sleep (Diekelmann 2014).

Sleep is essential to memory. One study not only found poor memory recall in sleep deprived individuals, but also found that they recalled false memories. That’s right, you are more likely to remember untrue information following sleep deprivation (Diekelmann 2008).

In other studies, those that slept, recalled more and performed better on cognitive tests than those who stayed up. Looks like those all-nighters weren’t the best idea after all.

How to Use Sleep For Memory Enhancement

Getting a good eight hour sleep has been shown to benefit memory (Diekelmann and Born, 2010). But what about sleep that occurs outside of your regular nightly routine, such as power naps?

In a study of 29 undergraduate students, one hour naps were found to benefit factual recall. However, the memory of procedures, that is, memory of how to perform actions, was not improved. The study concluded that more complete periods of rest were necessary for the proper learning of memory (Tucker et al 2006).

Even more stunning is that even very short naps seem to have a positive effect on memory of facts and information. A study compared different nap durations, as well as staying awake. They found that even a micro-nap of six minutes enhanced memory recall. The study concluded that although longer naps improved recall more than very short naps, very short naps still have significant benefits (Lahl et al 2008).

Ultimately, it seems that if you’re looking to improve your memory of facts and information, naps are in fact helpful. However, if you are trying to learn the keyboard, a longer sleep time is what you really need.

In terms of the optimal or minimum amount of sleep that you’d need, that is still unclear. More research is needed.

However, if for whatever reason you can’t afford a full-night’s rest, a nap might help to keep you going.

How to Get a Good’s Night Sleep

Now that we know the importance of sleep, you may be wondering how you can get the absolute best sleep possible. After all, most of us do not have the benefit of being able to sleep and take naps whenever we’d like. That’s why it’s important to learn how to get the highest quality sleep during the time you have available.

Here are some tips to improve your sleep and help you get to sleep faster:

Memory enhancement is a tricky business and there are a myriad of ways you can do it. Whether it be food, meditation, or drugs, everyone has a preferred method.

Regardless, everyone needs to sleep. Since sleep plays such a key role in memory retention and recall, you might as well make the best of it. Make sleep a priority in your daily life.

Contrary to popular belief, sleep isn’t for the weak. Sleep is for those with great memory improvement goals.