Prime Ministers Of Canada: How To Memorize Them All 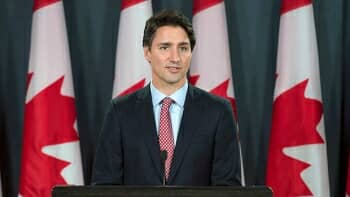 2020 Update: If you’re American, here’s How to Memorize the Presidents.

But for some reason, when times get tough, without knowing a thing about the Prime Ministers of Canada, people around the world throw up their hands and say, “It’s time to head to the Great White North.”

You’ll find some beautiful terrain and plenty of peace-loving citizens. But as a nation, we do not lack our own host of colorful characters.

So if you’re coming over for a permanent BBQ in response to US election results or some dictator who’s been giving you the squeeze, it’s time to learn how to memorize the Prime Ministers of Canada. It’s important to know what you’re getting into, after all. 😉

The first thing to understand when memorizing the names of the Canadian Prime Ministers is that you’re dealing with a list. We’re talking about discrete units of information. Like, Sir John A. Macdonald (1815-1891).

The best way to rapidly memorize any list is to create a Memory Palace.

All Memory Palace creation takes is a simple drawing and a list of your Magnetic Stations charted out in a strategic way. Creating an effective Memory Palace reduces your cognitive load to a bare minimum. That reduction forms a huge part of the secret behind how memory techniques like a Memory Palace work:

If you need more guidance, here are an additional 5 Memory Palace Examples.

In this case, we have just 23 names for the Prime Ministers of Canada. When it comes to memorizing them, you have options.

1. You can create one Memory Palace with 23 Magnetic Stations exclusively for remembering them.

2. You can create two Memory Palaces with 12 Magnetic Stations each.

In either case, you ‘ll ideally use Memory Palaces with more Magnetic Stations than you need so that you can use more than one station per name if needed.

Or, if you’re already experienced with memory techniques, you can experiment with the Magnetic Memory Method “passing the baton” technique, which allows you to memorize more than one name per station. That’s for advanced memorizers, however, and even then, it’s good once in awhile to stick with the basics.

And that’s ultimately what I recommend so that you can add the dates of the Prime Ministers later using the Magnetic Chaining memory technique.

The Art Of Embarrassing Politicians

Let’s assume you’ve got a Memory Palace with a bit more than 23 Magnetic Stations to give you wiggle room.

Next, you need your list of information. The Wikipedia Prime Ministers of Canada page is as good as any. Whip that little darling open and look at the first name.

The trick to memorizing anything is association, also called encoding. It’s easy, fun and with a bit of practice using special exercises I’ve created for you, unbelievably fast.

John A. Macdonald, for example, brings to mind a picture of my friend and fellow mnemonist, John McPhedrine to mind. You’ve heard him on the show talking about memorizing German and music before.

I see John at the first station of the Memory Palace I’ve created with a giant letter ‘A’ in his hands. He’s using this to smash my MACbook Pro, which is playing a video of Donald Trump singing “Old Macdonald Had A Farm.”

Plus, as an advanced memorizer, I’ve got Trump’s hair as the tail of a dog swatting at a bat.

Because that additional imagery helps me remember the dates of this Canadian Prime Minister.

How does that work? It sounds complex, but it’s actually simple:

Using a special memory technique for memorizing numbers, 15 is “tail” and 91 is “bat.” I’ve got an entire course in the Magnetic Memory Method Masterclass about all the ways you can remember numbers, or you can just check out this post on the Major Method. It’s a great way to instantly memorize any number, and not just short ones like historical dates.

The Prime Minister Who Built Walls
You Can Be Proud Of

Once, while touring Fort Henry as prime minister, he asked the soldier accompanying him if he knew the thickness of the wall beside them. The embarrassed escort confessed that he didn’t and Mackenzie replied, “I do. It is five feet, ten inches. I know, because I built it myself!”

Little anecdotes like this can be fun to remember when memorizing a name. Plus, it’s interesting that Mackenzie was three times offered knighthood, but refused each time.

To encode all of this into memory, it’s a simple matter of seeing Alex from A Clockwork Orange taking … certain liberties with a former high school girlfriend of mine by the last name of Mackenzie against a section of the Berlin Wall now fixed on station two of my Prime Ministers of Canada Memory Palace. (Phew … that was a mouthful.)

But the Mackenzie I used to kiss so gently in high school fights back by trying to knight him with a giant camera that he beats away with a pamphlet printout of Plato’s Allegory of the Cave.

Why a camera and this bizarre retaliation with an ancient allegory? You’ve probably already guessed it by now. It’s our old friend the Major Method, which tells me that “cam” decodes to 73 and “cave” to 78, the same years Alexander Mackenzie served as one of the Prime Ministers of Canada.

Isn’t That Just Too Simple?

It really is, and that fun simplicity explains why so many people who get into memory techniques email and ask me …

Absolutely not. And here’s why:

It’s one thing to create the Memory Palaces and have fun dreaming up weird images and vignettes.

But you’ve also got to replay these stories and decode them in your mind over time. Skip this step and the information might still get into long term memory, but I wouldn’t bet on it.

Luckily, setting up a Magnetic Memory Method Recall Rehearsal routine is easy. Just go over the information you’ve memorized about 5 times before the day is through. Make one of those times right before bed to help consolidation.

But here’s a warning:

Some recent research evidence suggests that older people don’t get the same memory consolidation benefits as younger people do. It’s good to keep that evidence in mind, but also be your own scientist. As you can see in this video on making boring information more interesting, I got away with a high recall rate after far fewer Recall Rehearsal sessions. But I would have done better if I’d repeated the poem more often.

The Rule Of Five

If you’re feeling overwhelmed or wondering where you’re going to find the time, don’t stress it. The important thing is just to get started. Memory techniques are a skill you’ll want to use for life and the Prime Ministers of Canada is just the beginning. Later, they’ll help you focus on your work in some very impressive and powerful ways. That’s why we want to use them after all, right?

I hope you’ve seen how you can not only memorize a long list of names, but also add historical dates and facts. When I look at station two of my Memory Palace of Canadian Prime Ministers, it’s easy to see a movie character and person from my past interacting with a few select symbols that help recall an interesting scenario and numbers.

Wrapping It All Up With
A Magnetic Little Bow

Here’s a summary of all you have to do to experience great success:

1. Create a Memory Palace for the Prime Ministers of Canada.

Remember to pad out your Memory Palace so that you have a few extra stations in case you need them.

2. Have the names prepared.

You can do it directly from a Wikipedia page, but you’re better off printing the list out and encoding the names to your Magnetic Stations somewhere you won’t be bothered by notifications.

Being tempted to skip around on your browser isn’t helpful either. Like I said last time about boring information … Instead of taking it in small doses, make it exciting for yourself. It’s not that hard!

The Rule of Five is great, but take it on principle, not as dogma. Always test and never hope that five repetitions is enough. It might become more than necessary once you get good with mnemonics, but it will never be too much. Every time you enter a Memory Palace and practice the beautiful art of memory, you get better and better with the best asset you’ve got:

The ability to learn, remember and recall anything.

Now then … How about that Canadian anthem? 😉

5 Responses to " Prime Ministers Of Canada: How To Memorize Them All "