Memory Rescue Review: Can This Book Supercharge Your Brain? 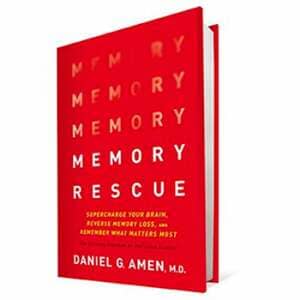 Memory Rescue is one of those books that is both easy and difficult to recommend at the same time.

See, Dr. Daniel Amen points out early on that memory deterioration often happens to people before they realize it.

He’s absolutely correct that cognitive decline is not inevitable, but it’s hard to know exactly who this book is for.

Because if you’re already struggling… chances are you might not remember to take action on what he says in the book.

And given that Dr. Amen is considered a memory expert, it’s odd to me that he creates a complicated mnemonic like BRIGHT MINDS to guide you through the book.

For most people who want to remember each and every part of that acronym to “rescue” their memory, they’re going to need a lot more than this book.

But don’t get me wrong.

There are a few things to recommend in this book, so let’s have a closer look.

Who Is Dr. Daniel Amen?

Daniel Amen is a physician turned authorpreneur. That means that many of his books point to a larger set of businesses. This set of businesses includes Sharecare, which is described as a “digital health company.”

Books like Memory Rescue definitely contain some value, but they are often considered in the marketing industry as “welcome mat” offers or “self-liquidating offers.” In other words, they’re not written to make a profit. Rather, they functional as sales letters designed to create interest in “backend end” offers.

How do I know that Dr. Amen falls into this category?

I don’t know with 100% certainty, but his author bio in Memory Rescue discusses his work with Pastor Rick Warren who wrote The Purpose Driven Church. In this book, Warren essentially teaches pastors the Dan Kennedy approach to using direct-response marketing to make a church profitable.

Another sign of this kind of business activity is the fact that the book is one thing, the Memory Rescue Workbook another. Which one do you need to get results from? It really isn’t clear.

To a certain extent, there’s nothing wrong with operating businesses in this way. It might appear to you that I’m doing something like this myself. Most of my books point to the Magnetic Memory Method Masterclass, after all.

And of course I’m biased when I say the following: I do all that I can to make my free course so valuable that anyone can get immediate results from it. Likewise, all of my YouTube videos, podcast books and courses are designed to be valuable unto themselves.

(The only catch with my training is that you have to take action, which is a desire no one I’m aware of can supply.)

Thus, Memory Rescue is an Internet era book, an artefact of its time. It certainly contains valuable information you can benefit from without following any links, even if it positions itself in a funnel designed to encourage readers to do just that.

Anyhow, let’s move on to discuss Amen’s medical work, much of which appears quite scientific. I looked up a few of the scientific journals he mentioned and he is indeed listed as co-author. I also found one where he is listed as the head author, but it was related to obesity, not memory.

Given the amount of TV shows his bio says he’s worked on as a producer, it’s difficult to know just how much time he spends on the most recent memory science.

It’s also difficult to assess the truth of claims he makes about Amen Clinics. We’re told that his clinics have the “highest published success rates treating complex psychiatric issues.” But he doesn’t list any of these publications specifically and I couldn’t find any.

What I can find is articles of Dr. Amen talking about the success of his clinics, such as in popular magazines like Psychology Today and Health & Beauty Close-Up.

Doing this research, I found myself in a maze of links that look like a lot of purchased press releases. 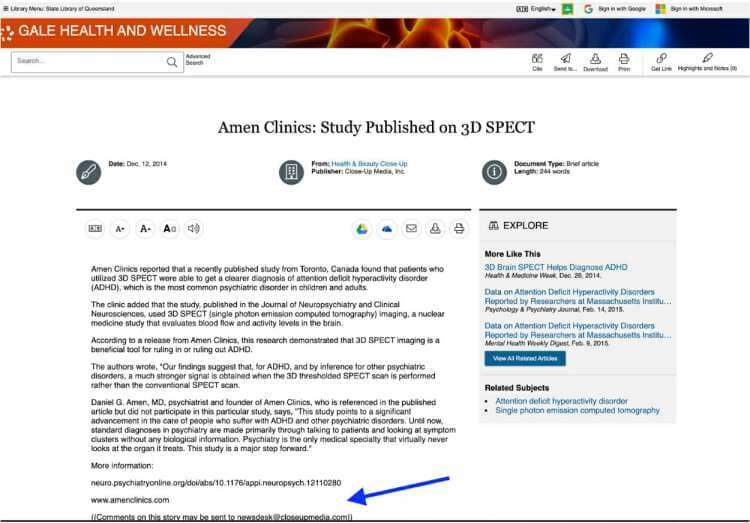 I’m not making claims about this author one way or the other, but just sharing with you how difficult it is to verify what his author bio claims about this work. In full disclosure, I’ve also purchased a press release or two, such as when I wanted the world to know that one of my students won the 2019 Canadian Memory Championship.

My specific concern with Dr. Amen’s research history is that these links don’t seem to lead to anything that substantiates the specific claim in his bio about Amen Clinics specifically.

And because it’s easy to “wow” people with such claims, the burden of proof when it comes to science and medicine is incredibly high. But how many people actually look into these matters to validate them for themselves?

I’m guessing the answer is pretty small. But I’m definitely not the only one asking questions about Dr. Amen only to have a hard time validating these claims. For example, the Observer journalist Richard Bernstein has asked why PBS featured Amen on the basis of what appear to be many dubious claims.

Anyhow, if you know how to navigate the labyrinth of online library databses better than I do, please help me out.

Memory Rescue Review: Does the Book Deliver on Its Promise?

In a phrase, I don’t know if this book delivers on its promises because it’s not clear to me who this book is for.

It certainly lists a number of positive activities just about anyone will find beneficial. Provided, that is, you take action on what the data is telling you.

For example, knowing your body mass index will indeed help you know which risk factors to address first.

And if you’re already in trouble or suffering long-term memory loss, it cannot hurt to follow this BRIGHT MINDS tips at the end of the book.

These tips are general knowledge that just about anyone will benefit from, provided your procedural memory is in shape enough to remind you to do them.

In brief, what you want to do is: 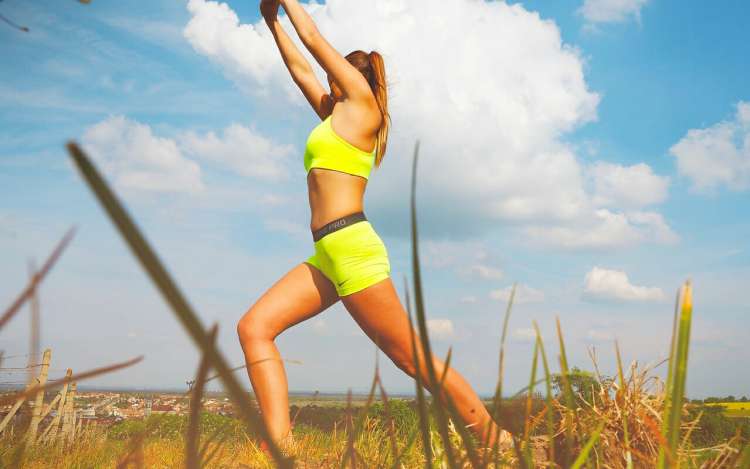 But there are some aspects to his advice that don’t make sense.

For example, he suggests listening to audio that will help promote sleep. I do not believe telling people to sleep with devices is a good thing. I could be wrong, but that seems like asking for trouble.

For example, ads, phone calls and notifications can burst through at any moment after you fall asleep. You can damage your ears and stretch your neck out of shape. You’re also exposing yourself to radiation. In full disclosure, I sometimes make this mistake myself, but it’s not good for me personally and it’s unlikely to make sense for others.

And the only reason I’m doing it is part of a longform n=1 memory experiment. One strand of it has to do with remembering dreams.

Likewise with the idea that you should “eat blueberries.” Sure, there are foods that can improve memory. But as I discussed in The Victorious Mind, I had to do rigorous testing to figure out I could not tolerate blueberries.

To be fair, Amen also talks about elimination diets. But it’s not helpful that he says on one page that you should use these kinds of experiments. Then on another, he says “eat blueberries.”

I’m complaining about this, not because I’m free from making such errors. I’m sure I do.

Rather, I hope all of us in this space will remember that we’re helping people struggling with memory and try to do better for the people we serve.

My Memory Rescue Review: The Ultimatum

It’s hard for me to say one way or the other if this book is worth your time.

I think it has several good ideas, such as meditating, exercising and learning to juggle. Some people will find it easy to implement the suggestions. Others will find the BRIGHT MINDS acronym very difficult to remember.

Then there are the paradoxes, contradictions and history of dubious scientific claims. For example, when Dr. Amen says play Super Mario but not Angry Birds and gives a scientific reference to back up this claim…

I find it hard to trust these references he gives even when I read them for myself. Especially when he’s talking about going to sleep with certain audio programs in the same paragraph that he tells you to “turn off your electronic gadgets an hour before bed.”

But I also want to be sensitive to the fact that we are all filled with contradictions. I myself tell others not to sleep with devices, but then go on my merry way running experiments in which I do exactly that.

This is the nature of the world: we’ve all got something to sell, even if it’s only our time. And we’re all contradicting ourselves all the time, which is why my memory training incorporates philosophy and critical thinking.

Overall, if you’re interested in memory, read any book on memory. Including Memory Rescue.

But my ultimate feeling is this:

What they need is to focus on the fundamentals of a robust mnemonic strategy so they can learn how to read and remember anything.

Not only that. They need to learn the ancient art of memory and practice it like a martial art of the mind.

And to that end, I welcome you to give my FREE Memory Improvement Kit a try:

Like Dr. Amen, I have to make a living too.

And one day I hope to have him on my podcast to discuss the truly beneficial things he’s sharing with people.

But at the end of the day, this particular book offers success stories that are impossible to evaluate given the tangled research. And the tangled way Amen’s research appears in labyrinthine loop of press releases.

All the same, I suggest reading it for yourself. Just keep in mind that the useful information it contains belong to the genre of common sense tips. All of them are freely available across the Internet.

But “free” is not necessarily the driver that gets people to take action, so keep that in mind as well.

Above all, consider this:

People are constantly in search of tips.

But what if the real help you might need isn’t definable as “rescue”? And what if what you really need cannot be found in “tips”?

The memory healing many people seek is only going to be found in the practice of techniques like the Memory Palace.

Not as a short term fix.

But as a way of life.