How to Memorize a Map: A Proven Process Anyone Can Use 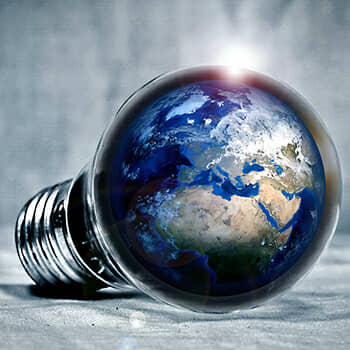 If you want to know how to memorize a map, the process is fun and simple.

The trick is to have a reliable mnemonic strategy.

To make the process straightforward, you’re going to create associations based on spatial memory. And the easiest way to do that is to turn the maps you want to remember into a Memory Palace. And there are a few other mnemonic devices I’ll help you learn on this page too.

So whether you want to be an expert geographer or just be more successful on quizzes, this is the memory training for you.

How to Memorize Maps Based On The Continents

First, we want to look at maps as objects and understand them spatially.

We also want to harness the power of scale.

To do that, we will start with the largest scale possible: the continents. 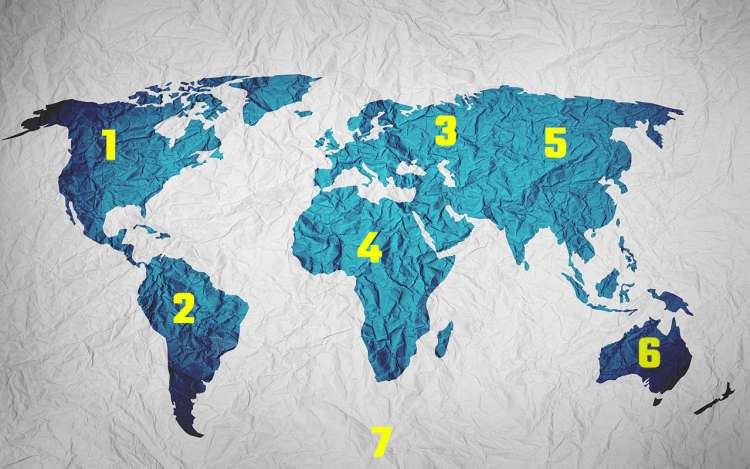 Different schools around the world count the continents differently, but most parts of the world use the seven continent model. I’ve numbered them on this map for ease of using a very simple memory technique.

The technique is called the pegword method.

It allows you to create an image for each word you want to remember. For example, One is a gun, two is a shoe, three is a bee, etc.

To memorize the continents quickly, you could use this technique in the following way: 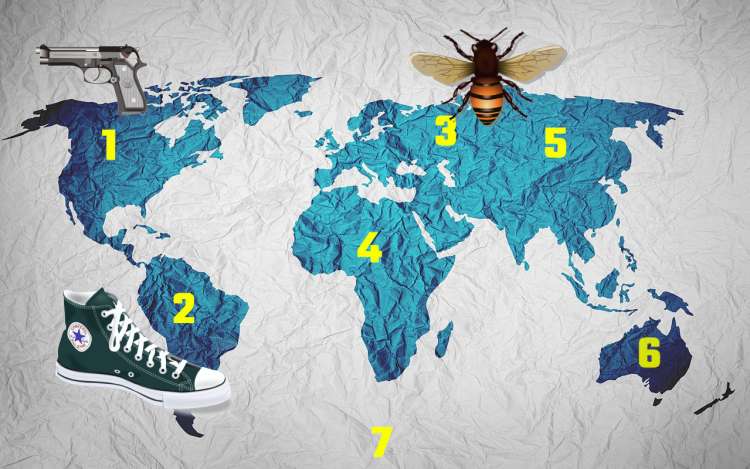 This is the numbering that made most sense to me. You can choose any order that works for you.

One is a gun, so we mentally place the image of a gun on this part of the map. You might also think about how the United States is in North America and about their dedication to the right to bear arms.

Note: If you don’t like guns, you can use a bun, the sun or some other image. In memory techniques, we often remember more if the images are exaggerated and specific, so keep that in mind if you have issues. In this case, the choice of a gun lends itself to specificity because of the relationship the people in this region have to guns.

Two is a shoe, so we can mentally place a shoe on this region.

As in the preceding example, we want to think about how to make the association more specific. So if you’re using this technique, you could do some research into famous South American shoes.


Now, you might think: That’s just going to add more time to the task!


Sorry, but I don’t think so. If you really want to perfect your world map study, you’re going to use such interesting facts and details to help you make more associations later on.

Three is a bee, so you can memorize its location by having a giant bumblebee using the Berlin wall for a hive. Or you can have the bee pollinating the Eiffel Tower or any other European landmark you know.

Four is a door, so you can imagine the entire content as a giant door made of ivory or some other substance that reminds you of the region.

Five is a hive, so here you can imagine The Forbidden City in Beijing as a kind of beehive.

Six is drumsticks, so perhaps you have your favorite drummer pounding on this land mass.

Seven is heaven, so you can turn that white icy ground into soft clouds and imagine an angel walking across the landscapes.

The pegword method is tremendously useful, and now you’ve created yourself a kind of Memory Palace because you know the location of all seven continents.

How To Study Maps By Turning Continents Into Memory Palaces

Nearly every continent has been divided into a number of countries. One exception is Australia, which we’ll talk about later.

First, let’s discuss how to learn maps by memorizing the countries on a continent. 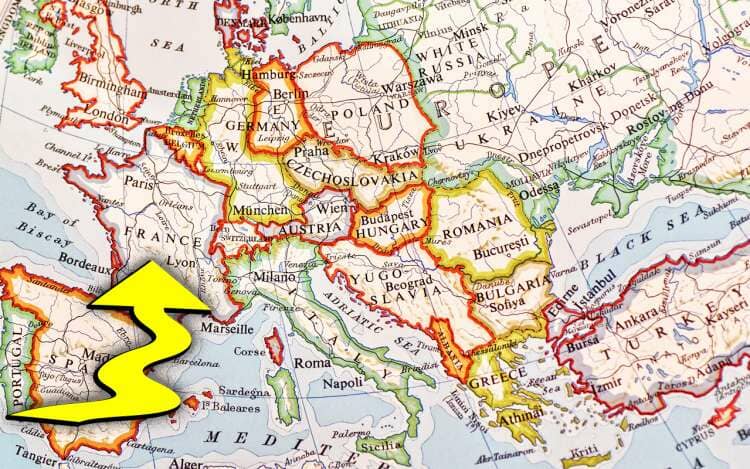 We begin by finding “columns” on the map and using these to create a Memory Palace journey. In this case, we’re heading north.

Now, if you like using the number-rhyme method, you can continue at the level of different countries. However, it gets hard to rhyme numbers like twenty-seven and fifty-three without repeating the same images, so instead, I suggest you mentally travel in a direction and impost mental columns as you go.

Also, create “Bridging Figures” that make it easy to mentally travel. Let’s say we start in the south of Portugal and using a mental column we travel north to Spain, through France and arriving in England. 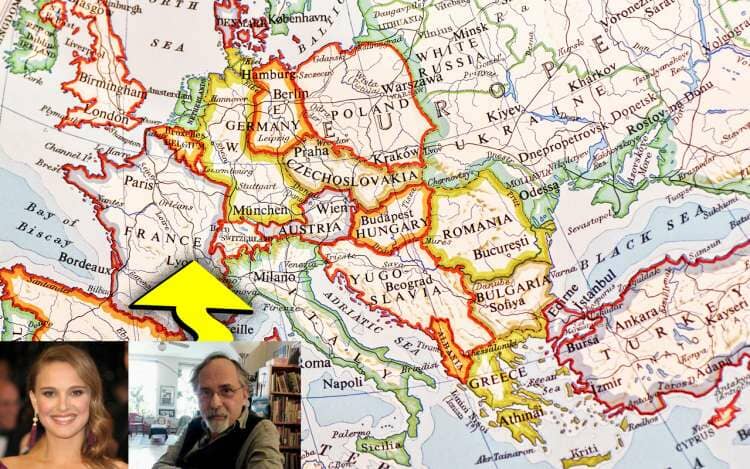 By adding “Bridging Figures” coded alphabetically to the countries, learning how to study maps and remember the borders of countries becomes much easier.

Since Portugal starts with Port, I would think of Natalie Portman meeting Art Spiegleman at the border with Spain. I choose Spiegelman because “Sp” is the start of both his name and the name of the country.

If you don’t know people with names that match as closely as these examples, you can choose objects or other words, such as the notion of Natalie Portman having a battle with a Spartan soldier or a spool of thread at the border of Portugal and Spain.

Note: You might be thinking… Hold on… Wouldn’t I want to save Schwarzenegger for Austria? You certainly can, but in that case I would stress his first name, not his last. Austin Powers is much closer for Austria anyway, and the fact that the associations are absurdly out of place only helps trigger your memory of these maps.

Rest assured, if you practice these techniques of association, you will always be able to rapidly remember any kind of information you want, including all the borders between all of the countries.

What we are essentially doing is turning the map of this continent into a Memory Palace. Each border is a Magnetic Station, kind of like a fridge magnet that you’re sticking in place.

To help you learn these skills rapidly, make sure to grab your spot here:

Next, let’s break down how to memorize states and regions.

Australia is a continent that is also a country. On this map, we see its seven states, plus one feature that I’ve added to help you learn these techniques better: 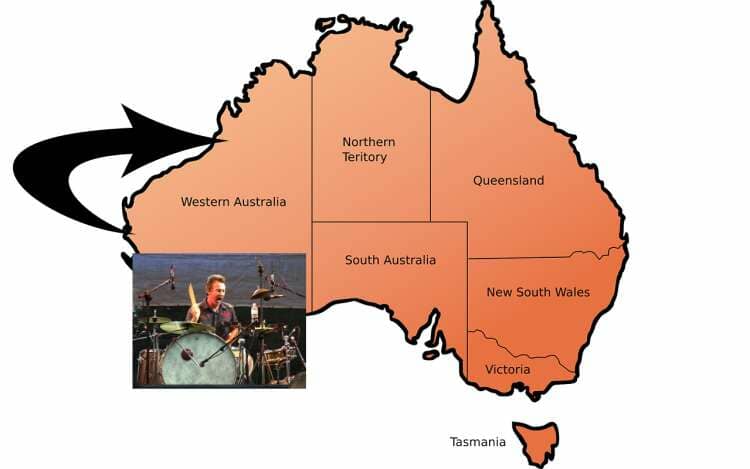 Do you know who that drummer is?

It’s Rob Hirst from Midnight Oil, an Australian band. You can use him, or some other drummer to help you memorize the regions of this country.

To remind you, I am using a drummer because I had drum sticks as the tool for helping me remember the name and location of this continent. You obviously don’t have to use a drummer yourself, but the point is to make the associations fun and easy by compounding them whenever possible.

In this case, the game is simple. You would just have this drummer move around the country in a clockwise fashion and imagine associations that help you remember the names of the regions.

Getting Granular: Memorizing Streets And Addresses In Cities

If you want to know how to memorize the maps of cities, the process is going to be similar. You’ll just need more associations.

To help you go even deeper and even memorize any address, here are some tips:

When it comes to memorizing street numbers, you’ll want to go beyond the number-rhyme system you learned above and learn the Major Method.

Making Sure The Maps You Learn Stay In Long-Term Memory

Although memory techniques are the closest thing to real magic that exists, you still need to repeat what you’ve “encoded” using the associations we’ve discussed today.

The great thing is that memory techniques reduce the amount of times you have to repeat the information. And the Memory Palace makes it easier to find the information in your mind so that you can repeat it.

There are a few different ways to answer the question “how often” you need to repeat the information. And to help answer that, I’ve shared these “repetition rules” with you.

In sum, you need to develop your own recall plan and realize that it will always be different.

Just as the number of countries in the world is always subject to change, so too is the amount of Recall Rehearsal you’ll need.

The best part is that when you’re learning maps with the creative memory tools you’ve just learned, it’s always fun, easy and a path to learning more in the future about the world.

Want to reinforce what you’ve just learned? Read How to Remember the States next.