How To Remember The States: A Step-By-Step Guide 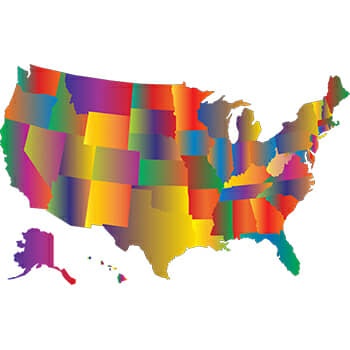 There are a few easy and fun ways to memorize the US map.

In fact, exactly how to learn the 50 states is one of the most exciting and fun processes you can master. Going through the process will help you learn how to memorize many other kinds of information.

They are all incredibly engaging and I’m going to share with you three different options. That way you can choose which way you want to explore first. If one of them isn’t right for you, come back and explore another approach.

Now that you know you’re in the right place, let’s get started!

How To Memorize The U.S. States And Capitals: 3 Amazing Options

Learning States And Capitals with Option One

To use the first option, you’ll want to think about how you can turn a United States map itself into a Memory Palace.

Let’s start simply by observing the general shape of the country. 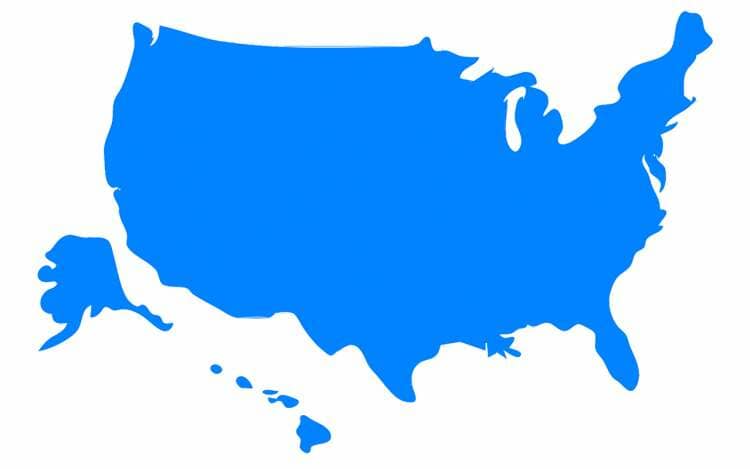 Simply observe the shape and notice any features that leap out at you. Does that look like a horse’s head around the Great Lakes region to you?

Get relaxed as you look at it and allow impressions to come to mind.

For example, one obvious impression is that there’s a horse’s head around the Great Lakes region. And it almost looks like boot spurs coming out of Luisiana.

But something even more obvious than those useful image-associations are the cardinal points. 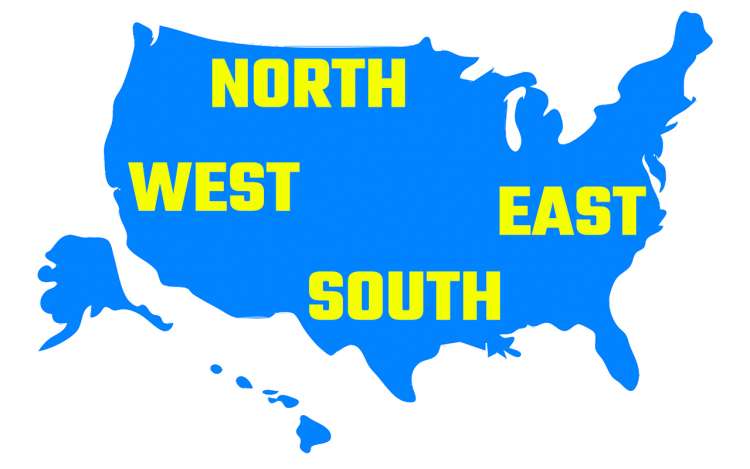 As you’ll see in the moment, the cardinal points can suggest some powerful tools and help create columns that reduce cognitive load when remembering all 50 states and their locations.

Although it’s obvious on the on the one hand that north is at the top of the map and south at the bottom, if we don’t “prime” our minds, we miss out on a lot of potential memory tools.

For example, imagine you start with just the northern states and use the border as one “wall” of your map Memory Palace.

You could pick a Magnetic Bridging Figure like Oliver North and imagine him walking across the upper most border to help you imagine each of the northernmost states. 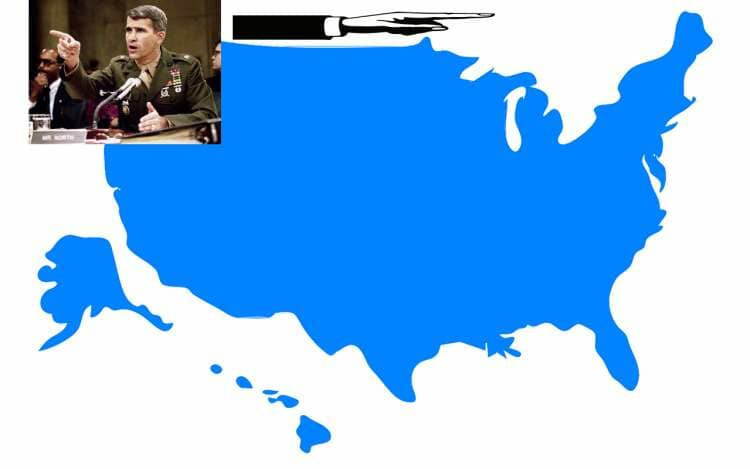 The idea is to use the story method as a kind of linking structure around a central figure. Oliver North travels the entire northern border, providing associations for each state.

Using a character like this is tremendously powerful as a mnemonic strategy because you can reuse Oliver North multiple times and create a kind of story that reduces the cognitive load.

If you add more logical elements to the story, you can help yourself remember which states border which. For example, you can think of a reason or concept that explains why in your story Idris Elba is linked to Washington.

Or you can compound with another sensation, such as music. Perhaps North wins his battle with Washington and whistles the tune to Iron Maiden’s “Ides of March” to celebrate his victory. Let your imagination go wild so long as you focus on associations that will work (i.e. “id” words that match with other “id” words will trigger “Idaho” a lot better than “ig” or “if” words).

Once you’ve established the states along the row, you can add the capitals by adding an additional story element.

If you’re a beginner with memory techniques, I recommend that you add this second layer after first establishing the states. If you’re more established, you can probably weave both the states and the capitals together on your first go.

Pro tip: As you memorize the US state capitals, make sure that you make each image as multi-sensory as possible. This will ensure that you don’t forget any part of the story.

For example, when Minnie Mouse rejects the flowers, make sure you feel what it’s like to have a bouquet of roses thrown at you. Literally experience in your mind the thorns puncturing your skin.

How To Memorize the States In A Memory Palace

Obviously, not all of the states fall in a linear line like those on the border. But you can still work in some form of basic horizontal or vertical column.

And if you don’t like the idea of making a story that reuses a single character, you can place the states in a Memory Palace.

Let’s say I’m going to memorize a north-to-south column like:

As with the story method above, I would find close associations at the sound-word level and then layer them onto a wall in a Memory Palace. Like this:

In this Memory Palace example, we’re using a vertical structure to recreate US geography on a wall. This is very powerful for remembering state borders. It’s also easy to “compound” the capitals on later too.

In this mnemonic example, you see that Minnesota is at the top of the wall and represented by Minnie Mouse.

There’s a pile of iodine crystals beneath that, and I would probably have Minnie Mouse mixing them with ayahuasca to remember both the border and get the “wa” sound at the end of Iowa.

Miss Piggy helps trigger “Missouri,” and I would probably stick the Uri Geller in the image to make sure I didn’t mistake it for Mississippi.

Finally, Noah’s Ark is a great way to trigger “Arkansas.” Perhaps Noah is trying to saw it in two to help you remember it. And although he’s not pictured in the illustration, in a real Memory Palace, there’s room for Lou Ferrigno at the bottom to help trigger Louisiana.

Will these example images work for you? That depends on your familiarity with the mental imagery I chose for myself. What matters is that you understand the logic of the techniques and practice that. If you need help, please enrol in Memory Palace Mastery:

If you want to memorize the state capitals as well, the process is the same, and I would move to the left or the right to add a second column if you’re not comfortable using the compounding story approach we’ve already discussed.

For example, to add that Jefferson City is the capital of Missouri, I would add someone from the cast of the Jefferson’s to the image. If you know how to memorize the presidents, you could also add in your image for Thomas Jefferson. This is a natural association that can be very powerful and demonstrates how the more you learn, the easier using these techniques become.

Alternative Arrangements In A Memory Palace

The cool thing about the Memory Palace technique is that you don’t have to arrange the states geographically. Really, the main reason to do that is to help you remember the borders and generally where the states and their capitals are located within the United States.

But you can also mentally organize and memorize the states and capitals alphabetically or according to a statistic like population. Using the same Memory Palace technique, you might add images like this: 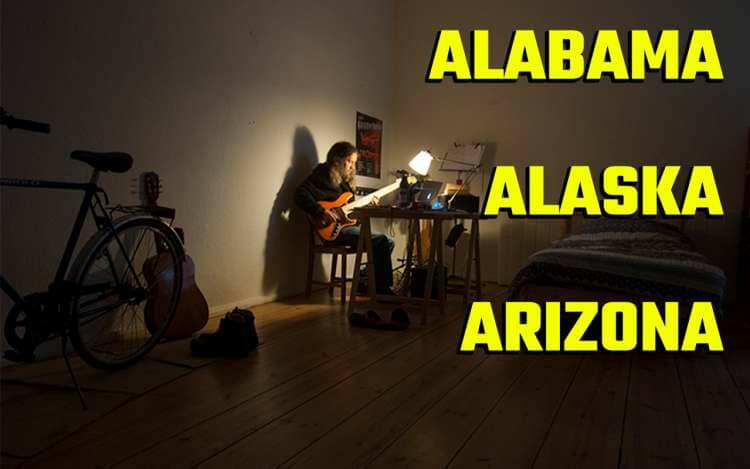 In this illustration, we are ordering the states alphabetically. Obviously, you would have an image like Weird Al serenading Obama for “Alabama” in place of the actual word.

If you order the states according to population and want to add the exact numbers, I suggest you learn how to memorize numbers. It’s a powerful and fun technique to learn and should definitely be part of your skill set.

How To Learn The States Using Mind Mapping

Although not quite as robust as the spatial memory techniques I’ve just explained, mind mapping is a strong alternative. It’s also a great way for kids to get started using accelerated learning techniques if they’re not ready yet for more advanced mnemonics.

To get started, I would suggest a clockwise structure. Like this: 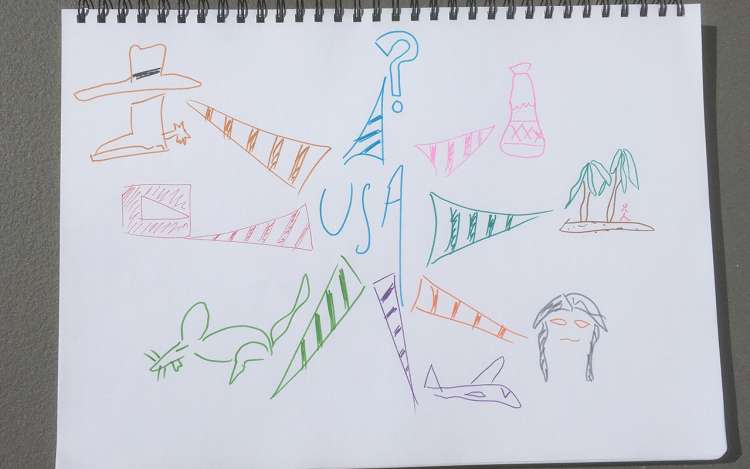 The only weaknesses of mind mapping the US states into memory are that you need to draw a few of them and adding the state capitals might get messy. But this article provides some solutions.

Let me explain the associations on the mind map first, and then the logic.

Starting at the top, I drew:

The Logic of Using Mind Maps for Memorizing States

On this mind map, I have placed the states I am memorizing in reverse alphabetical order. Some form of organization like this is important because it gives you a clue to what the next state should be.

Also, these drawings do not “feed” me the answer.

When mind mapping for memorization purposes, I highly recommend that your drawings trigger the answer. This simple tactic will help ensure that you are getting the benefits of what is called active recall.

(The alternative is passive review, or simply showing yourself the answer by rote, which is not known to improve your recall of information by much, if at all.)

I have not chosen different colors for each image merely because it’s fun (though it certainly is). By pausing to change colors, you give your brain a little rest. This step away from focusing on a task leads to diffuse thinking, or what you might call percolation. It’s happening in the background and is tremendously helpful for consolidating new memories.

Obviously, you’ll need a good 5-10 mind maps to cover all of the states. And you’ll need to put some thought into how to arrange them.

You’ll also want to think about drawing new ones to add the state capitals, though you could consider using flash cards, scrap paper or sticky notes to add them in. That way, you get the best of both worlds: you can add in the new information without changing the original drawings.

But as with all of the other techniques you’ve learned today, with a small amount of creativity, you can find ways to mind map connections that will help you remember the borders. If I wanted to remember that New Hampshire borders Vermont, I could add a laundry “hamper” to help and have the vermin chewing on it.

For more on mind mapping, please check out my full review of the 10 most important aspects of Mind Map Mastery. It’s a powerful resource.

How To Get Started Memorizing All 50 States

There’s no doubt about it: 50 pieces of information is a lot.

But 26 letters in the alphabet is a lot too, and yet you mastered it, one letter at a time.

The cool thing is that memory techniques make it possible to move a lot faster. You just need to set up the game so that it’s fun, easy and play it in a way you’re guaranteed to win.

My best advice is to approach the task of memorizing the states and capitals with a spirit of experimentation. That way, you’ll always learn new things and you simply cannot lose.

Now that you have three fun ways to explore, which state are you going to memorize first?