How Many Words Can You Place In A Memory Palace? 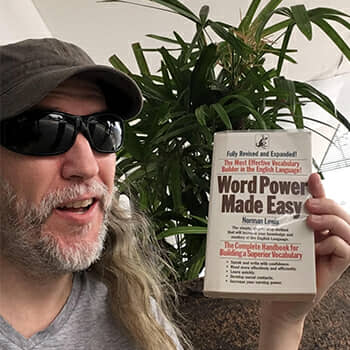 How many words can you reliably place in a Memory Palace?

In some ways, it’s not the right question, but for the fullest possible context, let’s look at the email I received:

Thank you for your excellent work. I have had an interest in learning German for decades.

If I have as the beginning room in my home as a station and each other room as a station, then when I add stations, I am forced to go outside the house?

Or can I subdivide the room later to make room for new words in alphabet order?

To do otherwise would seem to waste many possible stations because I see the potential to subdivide my rooms into many stations.

The problem for me is that if I am to stay strictly alphabetical, then I should leave station gaps in my word locations to use to add or drop new words alphabetically.

Is it possible to add new words on the same path? Or am I to be like a pearly nautilus and have to move out of each chamber forever locking out new word locations from a room forcing me to create new palaces for the same letter?

Even so, moving outdoors because of moving forward will not solve the problem of being alphabetized.

Perhaps I am over thinking this. Maybe you are teaching to just start learning in alphabetical order but in the palace itself and out into the garden and down the street does not require the words to be alphabetical.

I hope I am making my point clear.  You have really given me great hope that I can at last achieve my dream of being fluent in German. Your response will be eagerly awaited.

Thank you for your question.

Although the Magnetic Memory Method can be used to memorize the vocabulary of any language, I’ll always be fond of using it for German.

Because this was the language I was studying when I developed, innovated upon and ultimately launched the Magnetic Memory Method.

But no mnemonic strategy I’m aware of is limited to just one kind of topic. So to help as many people as possible memorize foreign language vocabulary and much, much more, this website has been part of promoting the next wave of easy, elegant and effective memory techniques.

You’re right that the books in the Magnetic Memory Method series keep things simple. Everything is designed specifically for those people who want more knowledge about my approach to mnemonics and to memory improvement strategies in general.

So yes, the books are a solid foundation for getting started.

I teach an alphabetical Memory Palace system with the core principles necessary for building them so that they’re effective and fun to use.

I also teach all the essential strategies in these books, such as how to create a journey through the Memory Palaces, outside the Memory Palaces and how to use individual stations within each Memory Palace to store more than one word at a time, including full phrases.

For really ambitious memorizers, I’ve even conceptualized a relatively easy way to use stations in your Memory Palaces to magnetically memorize the equivalent word in more than one language at a time. I talk about this several times in the pages of the Magnetic Memory Newsletter.

As for creating multiple stations in your house so that you don’t have to go outside, this valuable activity is more than possible.

It’s a bit more advanced, but you’ll find a lot more guidance in the newsletter and in my video memory course called the Magnetic Memory Method Masterclass.

Quick Tips For Maximizing Space In A Memory Palace

Here are some quick tips.

First, instead of using an entire room to memorize one word or one phrase, try this instead:

Create multiple stations in that room. You can do this readily by:

That would add up to at least 10 stations per room.

There’s a potential problem, however, because using the ceiling and floor can lead to a convoluted journey.

Path crossing is one of the biggest pitfalls that both new and advanced people using memorization techniques to memorize foreign language vocabulary often fall into.

If you want more Memory Palace Examples, you’ll benefit most by learning from them and then making your own.

There’s one step beyond creating multiple stations within each room for storing more foreign language vocabulary and recalling it with ease.

Please use the principles of exaggerated imagery and absurd action along with the Magnet Memory Method Principles of alphabetization, “word division,” “bridging figures” and “compounding.” Here’s an example:

As you can see, there’s a lot more words you can memorize at the same time if your associations are truly “Magnetic.”

Practice Drills Everyone Should Use

You don’t have to memorize only vocabulary in order to improve.

Card memorization is  a good memory exercise in general, but has special connotations for people learning languages. This is because it helps you:

Not only that, but you can also perform some great memory demonstrations for people.

I myself am pretty good with a deck of cards, but still nothing amazes people more than what you can do just a few minutes after having learned this technique and memorized your first memorized deck.

We talked above about using corners and walls to have more stations. But you can also add “imaginary” elements.

One of the best ways, and the way most people I’ve heard from have benefited from this technique is to use imaginary – or virtual – bookcases.

In other words, you place an imaginary bookcase in a room in your house and then populate it with associative imagery that allows you to recall all of the foreign language vocabulary that you’ve memorized using the Magnetic Memory Method.

Well, it is, but you do want to follow certain guidelines. For example, it shouldn’t be just any old bookcase, but a carefully defined bookcase that will be like all the other bookcases you use. Since they are conceptual bookcases, you don’t have to put time and effort into giving them colors or ornate carvings, etc.

Instead, I suggest that you simply set a rule like this:

All virtual bookcases will have 10 shelves.

You can have more than one virtual bookcase per room, which is ideal for  people just starting to use virtual Memory Palace elements, but if you are using multiple bookcases, then you again want to set a rule, something like:

All rooms with multiple bookcases have 10 shelves.

In this way, you’ve just fitted 100 virtual stations inside of a real Memory Palace station based on an actual location (a room in your house, in this example).

It’s easy to get carried away and forget that you need to avoid trapping yourself and crossing your own path at all costs. This can get tricky when you’re working with so many virtual stations at a time.

However, with practice it’s completely possible.

Why? So that you minimize the time you might otherwise spend figuring out what comes next during rehearsal and recall.

There may be other rules to set, so let me know if you think of any. If you want to take things to their extreme, you could actually use three parts of each shelf in each virtual bookcase, i.e. left, middle, right.

You could double this by having these stations at the shallow and deep end of each shelf and zigzag between these mini-virtual stations so that you don’t cross your own path and burn up valuable mental energy, but this approach is rather advanced and probably more suited to people who are strongly conceptual thinkers.

In theory, however, it is entirely possible to have every known word in a language memorized, store and perfectly recallable in a single Memory Palace based on one building and no more, possibly just a single room, which may itself be completely imaginary or virtual.

But before I start to sound like a Borges short story gone mad, let me address your note about alphabetization:

No, of course you don’t have to memorize alphabetically with each letter of the alphabet assigned to its own unique Memory Palace based on a real location.

Most people find more great success this way than any other for reasons I’ve explored before in earlier volumes of the Magnetic Memory Newsletter (not to pass the buck on my earlier self, but I can’t cram the entire Magnetic Memory world into just one response, if you know what I mean).

You can certainly also memorize thematically, based on certain vocabulary topics such as law or medicine or simply use your Memory Palace to memorize words helter skelter as they appear in your life.

However, if you’re going to do that, then I recommend that you have a helter skelter Memory Palace worked out for that purpose in advance. You don’t have to use any of the Magnetic Memory Method principles for these purposes, but I guarantee you far greater memorization success if you do.

I hope that this answer at least scratches the magnetic memory surface of your question. Please feel free to send a follow up question at any time.