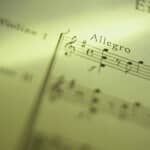 Here’s a nice question about memorizing music that I’ve tried to do justice in my response:

I am a recent convert to the idea of memory palaces, having used them to successfully learn various facts, and, most recently, shuffled decks of cards. I’m looking forward to putting them into practice with languages after reading your book!

As a professional cellist, I’m extremely interested in the application of memorization techniques for music, and wondered if this is how you are approaching the Bach suites? Colleagues are always asking me if I am going to use my new found memory skills for musical means, and I’d love to be able to say yes! I’d be fascinated to hear your thoughts on how to go about it, if you have the time.

Thanks for your great question!

Yes, I am still playing Bach:

A lot depends on what one wants to memorize.

If you want to remember the sheet music so that you can “see” it in your mind as you perform, then that is a relatively simple matter.

First, figure out how many bars you have and then create a Memory Palace for the composition. Then, store as many bars as you can reasonably fit per station.

That will require some personal experimentation and will vary from piece to piece. Bach’s Sonata #1 in G Minor would require a lot more space than Suite #2 in D Minor, for example.

To get the images into the Memory Palace, you could imagine yourself painting the sheet music on the wall of each room in very large and vibrant colors or have certain notes dancing. If there is one in particular note you always get stuck on, you could see that note juggling fire or slapping a clown – so long as the image is exaggerated and absurd, it will work.

I would think that visualizations of this sort would provide a great method most especially for those little mistakes one makes with particular notes.  I’ve experimented with giving each note a name or a shape.

In truth, I’ve not found it necessary because I’ve come to know how each mark sounds rather than what it is called. I think that is one of the first leaps a student makes, lest the student continue to mentally recite D, F, A while playing. That would probably not be a good thing.

But if one were to do that, however, a music mnemonic for the Circle of Fifths could be useful. Five Cats Give Dogs An Endless Battle is one that I’ve read about on the net for soloing up the neck and By Eight All Dates Get Fold Feet for soloing down.

But again, this is adding a mental step that one should probably go beyond rather quickly.   As for the fretboard, one could assign an image to each integer, but we have the number system for that … you could learn to sing the sound associated with each fret by singing its number, but singing its note name would probably be better for understanding the cyclical nature of the layout.

As for meter, we are lucky that the shapes indicating these are already pretty zany, but it would not be a stretch to associate each with an image. A man wearing a hat, a man holding a hat, a man leaping to escape a fire, a tennis ball flying at the head of a note etc.

Ultimately, these mnemonics should be useful for beginners, but I’m not sure about advanced players. Many of them would be very good at sight reading, even if that is no guarantee of having what is sometimes called flashbulb memory.

In all cases, I should think that memorizing sheet music is an option, or alternatively, placing an image of one’s hands on the fretboard in a station by station manner could be quite useful, or at least ease the anxiety of forgetting simply by going through the routine of placing the material somewhere.

Relating the sight of one’s hands in positions with the sound of the notes could also be quite useful, and visually linking positions with an image could be explored.

As ever, the individual memorizer needs to experiment with the different approaches and see what works. But where there is a mind, there is a vast and superior memorization machine, so long as it is trained.