How To Win The USA Memory Championship 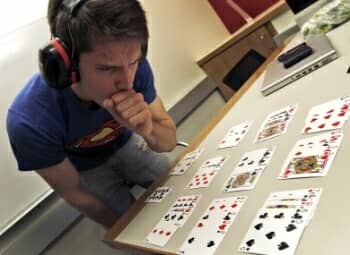 Take it away, Nelson!

So you’ve read a bunch of books on memory skills. You may have even listened to all the podcasts on this site.

But although many of them have helped your memory tremendously, there might be some of you out there who want to use your techniques to compete in (and possibly win) the USA Memory Championship.

As a 4x USA memory champ (and before you think I’m cocky, also a 3x USA Memory Championship loser), I know the ins and out to winning this competition.

Surprisingly, becoming a memory champion is not necessarily all about memory. There are a lot of other subtle things that go into making it to the end and winning the USA Memory Championship.

And I’m going to explain to you exactly how.

This first point is dumb and obvious, but I’ve met a lot of people who talk about the competition as if it’s this Holy Grail that awaits them …

… once they are truly prepared.

Just sign up and compete. There is nothing better than getting the experience of a full competition under your belt than actually competing.

I hate to say this but, no one (well except for the very first winner, Tatiana Cooley) has won this thing on the first try. You could argue that Joshua Foer won on his first go, but technically he was there the year before as a journalist.

Sure, he didn’t compete that first time, but he dug himself deep into the competition for his article. Scott Hagwood, Ram Kolli, Ron White, Chester Santos and myself, we all lost before we won.

Even this year when I took first place, I honestly believe I won based on competition experience. There were some competitors with better-trained memories than me, but less competition knowledge and experience.

So, bottom line, it’s about getting competitive experience. If you want that edge, just sign up and compete. It’s worth gold. Go for it!

Step 2 – Make It To The Second Round

The USAMC is split into two parts. The morning events:

Making it to this afternoon second round has a lot of parts, because you need to score well in each event to make it into the advancing top 8. Not as well as you might think, but decent enough.

The scoring works like this: With each discipline you get a score based on how much you memorize correctly according to the rules.

Then, that score is turned into a championship score, which is a weighted score based on a curve. The best score is 100 pts and then everyone scores comparatively.

Statistically over the years, you need about 200-250 out of 400 pts to make the cut. But standards change over time and it is harder to get a score that high than ever before.

But the nice thing is that even if there are a couple people hitting some awesome scores, there are a lot of people with mediocre scores. Until everyone in the USA is amazing at memorizing (which they’re not … yet), this fact will be your savior.

The mediocre scores are there because it often ends up that there are one or two, at most three front runners who are in another league compared to everyone else in the top 8. The rest are good, and still better than the remainder, but not that impressive comparatively to the top.

So the bottom line is that you need to score consistently mediocre (or better) across the board to make the top 8. You used to be able to pass to the second round by being amazing at just 2 of the events. But agian, that’s getting harder to do. And if you are great at only one event but none of the others, you’re chances are nearly zilch.

In other words, sorry to say, but there is no real shortcut here. You gotta be “good” at all four disciplines: names, numbers, cards, and poetry. But the good news is, you don’t have to be that good.

Okay, you’ve made into the top-8. Maybe not top ranked, but you’re in there. The nice thing about the afternoon playoffs is that it is all strategy. The chances for anyone to win at this point are all pretty much even. You could be the worst of the 8 (i.e. Ram Kolli in 2013) and still end up beating 1st place (me) and become the champ.

They take you backstage to memorize 200 words (or as many as you can of those 200) in 15 minutes. Then, recall takes place back on stage, in order of the list, alternating between competitors.

The round ends when three people have made a mistake. To me, this is the most difficult and nerve-wracking event. What you want to be able to do is memorize just enough not to run out of words before those three competitors get eliminated.

This means that the real trick is in figuring out how many words to memorize. It makes for a delicate balance between what you are capable of and what you think others can achieve.

There have been years that the word count went up to 88, and others where it only went up to 35.

Everything depends on circumstance. People trip up on the most unpredictable things.

For example, favorite Johnny Briones recited “architecture” instead of “architect” in 2014. Top 5 finalist, Brad Zupp swapped the very two first words “aorta” and “office” in 2012. And many others have just blanked when they new up to 100 or so words. You just don’t know who’s going to trip up, so make sure you know YOUR words.

Typically I go for what I think is a safe minimum, around 100 words. Make sure you can do those 100 words, and do them perfectly. What’s tricky in recall is that you aren’t by yourself reciting. You have to be mentally prepared to say every 7th word or even less if someone gets knocked out before you. This can be a bit tricky and throw you off if you haven’t practiced.

Next up, six audience members come on stage and state eight factoids about themselves.

Don’t bother listening to the people. Just listen for the name, memorize it, then put your head down, ignore them, and just study the sheet (the same information they speak is given to you in print). They talk way too fast to memorize it on the fly, so just read it instead.

Plus, you get an extra 7-9 minutes to review the packet info after the audience members are done speaking. On top of that, you get three strikes (not single elimination like SPOKEN WORDS).

I find this event the easiest because it’s so lenient. Typically it goes until two people are eliminated, but in recent years, no one has made three mistakes, so all five competitors qualify for the next round. Look for them to add a few more bits of info next year to make it harder.

So now you’ve made it to the finals! All you have to do is memorize two decks of cards in five minutes.

At this point, it’s most likely there are three competitors left (but it could be up to five). The goal is to memorize more than your opponents.

There was a time when memorizing around a deck and a half was championship winning, but not anymore. Last year four out of the five finalists memorized (or claimed to) both decks in their entirety. So then it comes down to accuracy.

How reliably can you recite those two decks perfectly? You won’t have to say all the cards, since you’ll be alternating between competitors, but as with the words, you need to be flexible and say any card when it comes to you. A few competitors have failed to do this over the years (me included) despite being clear favorites to win the title. It’s tricky, but can be overcome with practice.

Step 4 – Fly Under The Radar

Here’s an “inner game” tip to take with you for the whole competition:

Don’t talk hype. Just show up to the competition and kick some quiet ass.

For one, you’ll be no one’s focus. You can freely chill out in the back of the room hitting the scores that you practiced with zero attention coming your way.

But if people know about you or you’ve been around a few competitions and done well, you’ll get more attention. More attention means more stress and possibly more cameras in your face.

What I wouldn’t give to do my 2010 competition again. No one knew me, and I came out of the gates shocking everyone, quietly and confidently. The top guys didn’t know anything about me, and it made them nervous while I was in there just cruising.

Obviously there is still a lot of work you’ll have to do if you want to do well in all the events. But there is an endless amount of literature on just how to train your memory for competition. You can start at Art of Memory where you’ll find loads of resources created by other memory competitors.

Put all those things together and with enough luck and skill, you might just find yourself standing up on stage as the 2016 USA Memory Champ.