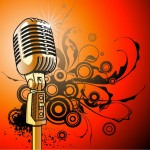 I saw a great band last night and had a great discussion with some friends outside the club.

They all have great English, and yet are completely self-deprecating about their skills.

It’s more than being modest.

It’s actually a touch destructive, or at the very least, regressive.

I say this because so often they begin a sentence in English and then stop and say that they can’t explain themselves.

But they were doing just fine!

Of course, I love hearing and speaking German, so it’s okay if they pursue their line of thinking in their mother tongue, but I always find it a bit tragic.

Not only are they not practicing self-expression in their second language, they’re sending themselves (and their interlocutors) the negative message that they cannot express themselves in another tongue.

Can you see why this is regressive?

Speaking another language, particularly when doing so using the assistance of mnemonics, really requires forward movement. Yes, you can pause and consider what you want to say, but it’s not ideal to stop and say, either internally or externally that you need to finish your thought in your mother tongue.

One of the best ways I’ve found to combine memory techniques with language learning is to use a service like Skill Silo. Speaking with native speakers online has helped me in real life.

So here’s what I started doing. I started saying: “Please continue what you were saying in English and then tell it to me in German.”

We all won because my friends stretched their abilities and I got to hear two very different versions the same idea enunciated very differently.

It reminds me of how closely things such as mindset and the words used to express it are so closely related.

Nonetheless, my point is that when we are learning or just using a second-language, we’ve got to be a bit like a tank or a rolling ball of snow.

Sure, you’ll crush more than a few lilies as you make your way towards comprehensibility, but you’ll stretch. And when muscles stretch, muscles grow. You might not feel it all at once, but one day you’ll wake up and you’ll be thinking and speaking in your target language with great clarity and speed.

It’s the same thing with using Memory Palaces as taught in the Magnetic Memory Method online memory course. You’ve got to roll forward and go through the motions.

Sure, a few associations will be weak or have become rusty or broken, but that’s how you learn, that’s how you improve, that’s the friction that will keep your memory Magnetic.

Anyhow, at the end of the evening we all decided upon something I’ve talked about before in Volume 1 and Volume 2 of the Magnetic Memory newsletters. It’s that the two most important sentences you can ever learn in your target language are:

“Please correct me” and “Please repeat yourself slowly and with clear pronunciation so that I can understand you better.”

If you can pepper your target-language conversations with those two sentences while maintaining the art of rumbling forward without a single act of self-deprecation, you’ll be fluent because Jack can say Hammer.

I’ve got more general study tips if you’d like.