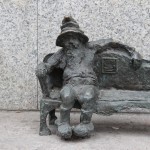 Check this out. I follow this fellow on Facebook and he’s got a cool idea you can apply to your memorization efforts no matter what language you’re studying (he’s addressing ESL learners in the video):

I fully support much of what A.J. suggests in this video and …

I’ll shake a Magnet instead.

Watching those scenes repeatedly to the extent he suggests, however … that strikes me as odd.

It’s 2013 and people still deny, ignore or live unaware of the ancient technology of the human mind.

Memory Palaces and your mind, dear Memorizers, are without a doubt the first and foremost Wonder of the World.

When I watch movies or have my coaching clients watch movies in French, Swedish, Japanese – whatever – we do it with a pen and pencil and a minimum of 26 Memory Palaces ready to go in their minds.

Yeah, it takes between 2-5 hours to set all of that up. (Look at those other Wonders of the World and I don’t think anyone who worked on the Pyramid at Giza would shed a tear at that).

We’ve all sat in airports and airplanes that took that long time to get us to the runway.

But once you’re flying, you’re flying, and that’s what the Magnetic Memory system is all about. Minor investment of time at the beginning, massive time savings later. Not to mention linguistic flexibility and pure, unmitigated communication pleasure.

The best part is, you only have to set up your personal Magnetic Memory system once.

Like any set of buildings owned by a property manager, you’ve got to maintain it.

But only once in awhile.

Luckily you don’t need to hire a cleaning staff, and you certainly don’t have to do any manual labor (even if imagining yourself scrubbing the floor of a Memory Palace might come in handy from time to time).

By all means, watch foreign language films and TV.

Watch lots of it.

Let’s say you watch the first scene of a movie in your target language and it’s 15 minutes in length.

You write down 10 words you don’t recognize.

You glance through a dictionary to find them, learn the meaning and then pop them into your Memory Palaces.

Go ahead and watch the scene again to get the sensation of what it feels like to now recognize those words and their meaning.

People don’t talk in clipped TV and movie phrases, after all, so you need a broader profile. Especially if you’re not going to talk to native speakers (which you really should – previous Volumes of the newsletter have many ideas that show you how).

Not only that, but people transmit the same information in multiple ways.

You want to be able to catch that.

But that ain’t reality, dear Memorizers. Not unless you’re an actor working on the stage.

In reality, people say the same things in a multitude, a plethora, a veritable mosaic of different ways.

But sticking with the same program?

That’s using entertainment like a hammer instead of a feed trough. Ah, language – yum yum!

And if you’re like to stick your Magnetic little head into the trough of foreign language words you have yet memorized, this online language learning video course will show you how to keep those words at your disposal for as long as you like. Coupon code “coachpotato” makes the investment you’ll be making that much tastier.