10 Memorization Not So “Tricky” Tricks With Bad Mnemonics 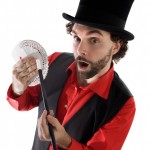 One of you sent me this interesting article on memory tricks to get my two cents on it:

I hope you don’t mind, but I’ve got more than two magnetic cents to give. More like ten dollars.

Memorization Techniques Are Not Tricks

First of all, I’ve always disliked the notion that mnemonics are “tricks.”

I’m an amateur magician, and “tricks” are what happens when someone causes you to look in a different direction in order to execute a move that the magician doesn’t want you to see.

Your focus is not only redirected, but the focus itself is grossly amplified in that new location (if the magician is any good).

Illusions, on the other hand, happen when you are able to look directly at the scene and view a visual transformation that you cannot explain by sleight-of-hand.

Or, if legerdemain is the only conclusion, then the sleight is executed in such a way that knowledge of the move does not detract from the illusion.

As you can see, neither of these definitions have a whole lot to do with mnemonics.

If anything, when you are “showing off” your memory skills, you absolutely want to focus attention on “how the trick is done” in order to help others acquire the skill.

And you are certainly never creating illusions. If you can rattle off the alphabet backwards or use sophisticated vocabulary because you’ve done the groundwork using mnemonics, then that is real magic.

And if you have aphantasia and use memory techniques to get over it, all the better.

Why Mnemonics Are Real Magic

In fact, mnemonics are probably the closest thing to magic that exists, and that’s Magic with a Magnetic capital ‘M,’ the kind that never resorts to tricks or illusions.

That said, of all the “tricks” (read “skills” instead) in this article, only one of them mentions location. That’s number nine in the article, and it limits the use of Memory Palaces to speeches. I find this odd because each and every one of the other tricks becomes doubly powerful when they are stored somewhere.

For example, take trick/skill number one in the article: rhyming. The author gives the example of “in 1492 Columbus sailed the ocean blue.”

Fair enough, but you have to get to “blue” in order to remember that 1492 ends with 2 … what about the 14? Perhaps “14 oceans were blue in 1492 when Columbus sailed the ocean true” might be another option for those who struggle with this rhyme.

Either way, the rhyme has at least a few visual characteristics.

But what if we want to use rhymes to memorize vocabulary?

For example, I’m working on Italian right now and let’s say that I want to remember that “ganascia” can mean either “jaw” or “cheek” depending on the context. Now, I would never actually do this, because it strikes me as a rather weak method, but I could use a rhyme: “ganascia has a jaw like a geisha.”

[You can hear how “ganascia” is pronounced by visiting its listing on Forvo.]

Notice that I’ve made quite a visual image from this rhyme, and that could be useful.

And like the Columbus mnemonic example, I actually have to get to the end of the phrase to trigger the beginning.

Perhaps “Geisha has a jaw like ganascia” would be better with an image of Gandhi kissing a geisha to go along with the rhyme and help trigger the “ga” sound.

But here’s the rub:

No matter which way I shake my Magnetic Memory stick at this mnemonic, the rhyme would just exist in the void of my head if I don’t stick it someplace.

Why not use a ‘G’ palace and pop this little gem into order with some other “gan” words and use Gandhi as a Magnetic Bridging Figure?

Doing so creates so many strong interconnections that you can literally bounce into fluency as if your Memory Palace were some kind of trampoline. Memory athlete and memory expert Nelson Dellis and I discussed this point recently.

In sum, rhymes have potential, particularly if you can get something visual into the rhyme, but especially if you locate the rhymes in a strategically predetermined location. Just like the Magnetic Memory Method prescribes.

There are some other interesting ideas in this article, all of which I think can be greatly assisted by coupling them with locations in carefully predetermined Memory Palaces, so make sure to give it a read.

And let me know if you use any of these strategies to memorize vocabulary with either great success, mixed results or none at all and I’ll pass on the word to everyone. What you’ve learned is invaluable, so don’t feel shy about writing in to share with others.